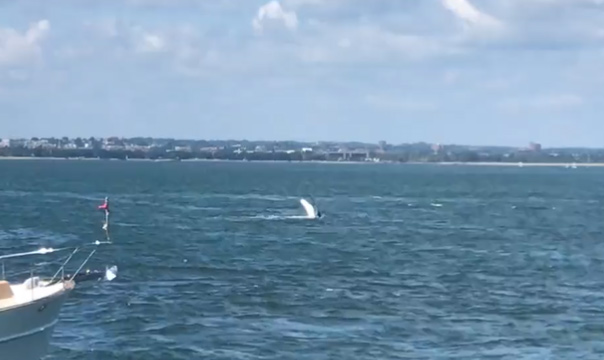 Not something you'd see in the Charles 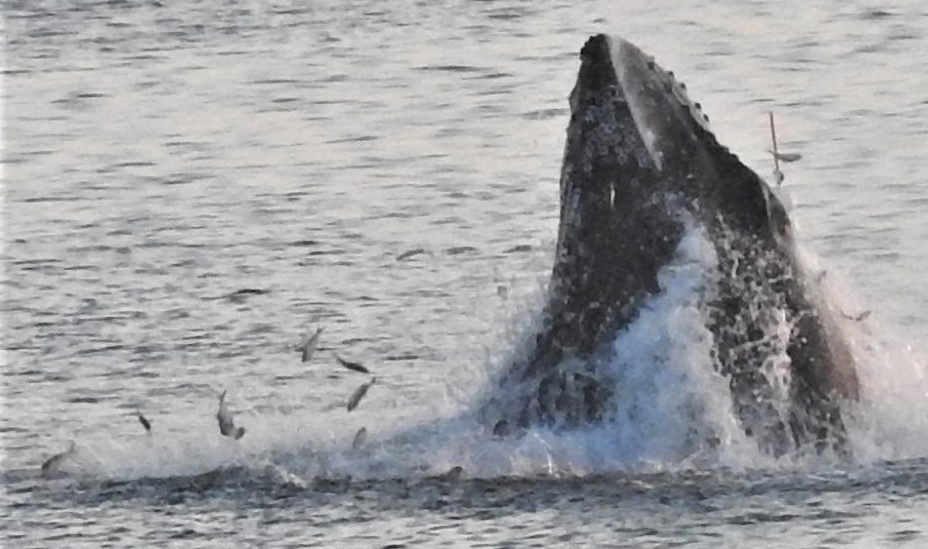 Spending some time down in Plymouth in recent days, Mary Ellen made a point of getting down to Manomet early each morning to watch the humpback whales enjoying a breakfast buffet just offshore.

That was no baby wheel, Jay!

The Cape Cod Times reports on the lobster diver who was briefly mouthed up by a humpback whale before it spit him out.

Michael Packard reports he was a modern-day Jonah for roughly 30 to 40 seconds.

WCVB shows video of a whale feeding and breaching near Deer Island yesterday.

State Police report on the 25-foot-long carcass. The New England Aquarium reports the carcass is that of a whale that had earlier washed up on a beach in Cohasset. This sort of wandering-whale-carcass thing has happened before.

A whale of a time in Boston Harbor 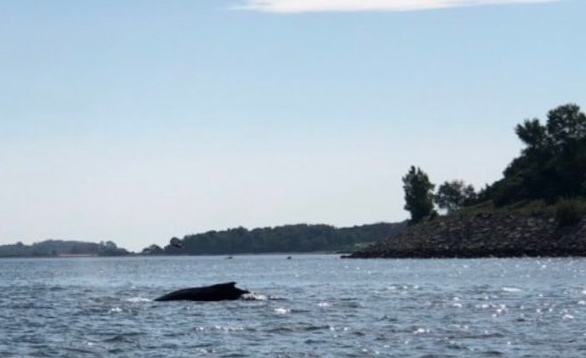 Good Morning Gloucester has some photos of feeding right whales this morning.

Mark Garfinkel took a number of photos of a right whale in Nahant Bay this week. And a seal.

A whale of a time just off Gloucester

Drone footage of a right whale at Bass Rocks.

The Ocean Alliance of Gloucester and Olin College of Needham have teamed up on a drone-based tool for taking vital signs from whales without shooting them with darts from loud motorboats. Read more.

Another whale spotted in Boston Harbor, but this time alive

WHDH reports on the possibly injured humpback whale that started to swim into the harbor until it was gently ushered back out to sea.

Good Morning Gloucester has numerous exclusive photos, should you have the desire to see a dead whale on rocks; wonders if somehow it's the same whale body that briefly washed ashore on a couple of islands in Boston Harbor. WBZ reports that yes, that is the former Boston Harbor whale carcass.

Closer, closer, yep, that dead whale's still on the beach

Noah Sachs forwards a link to these photos, taken by his friend Lars, who was out on the harbor today and took a series of shots as they got closer to that poor dead whale that's still just lying on the shore of a harbor island.

In a lawsuit filed yesterday in US District Court in Boston, the Humane Society of the US, Defenders of Wildlife and the Whale and Dolphin Conservation Society demand the government do something to stop the deaths - several of which they say occurred after the National Marine Fisheries Service released studies last fall that lobstering and large-scale fishing offshore were not jeopardizing right, humpback, fin and sei whales:

B. MacLean took lots of photos on a whale-watching cruise to Stellwagen Bank the other day.