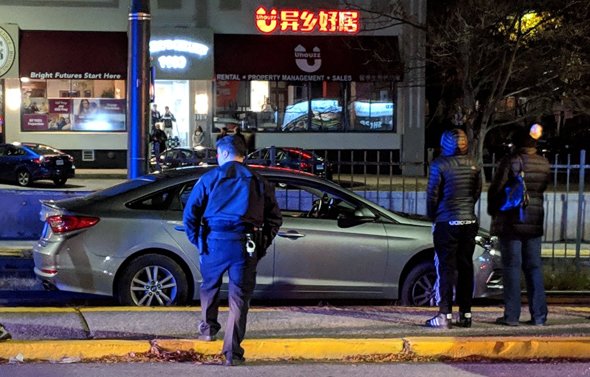 Sundaram shows us the car somebody managed to drive onto the outbound Green Line tracks at Packards Corner shortly before 7 p.m.

Danielle Jones photographed the car from inside a trolley:

That car doesn't belong there. Car on the tracks heading outbound to BC. B line is going to be delayed for a bit @universalhub pic.twitter.com/fr5tkym9hh

In May:
You can't blame all Green Line delays on the T; some drivers don't know how to handle tracks, you see.

There are no dumb cars

That's all too true, will!

All it takes is one or possibly two people to totally fuck it up for everybody else! It's rather disgusting...and irresponsible.

I still remember a similar situation that occurred, when I was in college, back in the mid-1970's, on a very snowy day, back in the winter of 1975, when I was at the School of the Museum of Fine Arts. I was at a station at Huntington Avenue, on the way to North Station, to catch the 6:45 p. m. train home to Lincoln, where I was still living with my parents, back then. I waited by the inbound tracks, along with a bunch of other people. Because a rather large automobile had gotten stuck in the middle of the tracks, the train was delayed in arriving for quite some time.

I arrived at North Station via the E Line (The Green line), and upon reading the train arrivals on the TV at North Station, discovered that I'd missed the 6:45 p. m. train home by just two minutes! So, I called my dad, and told him that I'd be taking the 7:45 train home instead, which I did. By the time I arrived at the Lincoln train station, it had stopped snowing, because the storm wasn't as bad as they'd predicted, but it was enough to present problems, nonetheless. My dad was right there, to pick me up. Everything turned out okay.

Same as it ever was

Because a rather large automobile

And did you ask yourself, well how did I get here?

It was a stormy day, and a monster of a snowstorm was predicted, so I had taken public transportation to school that day. I took a train from Lincoln, MA to North Station, then had to change for the E train on the Green Line, in order to get to school, so don't get feeling too snotty.

Except for rare occasions like really bad weather, since I was living in a suburb where the public transportation wasn't all that great, but used it as a last resort, I did drive in most of the time, and had a parking permit for the school, because I often picked up one of my teachers, who lived in the Back Bay, and drove her the rest of the way to school. Had I lived in the city at the time, I would've used public transportation.

I'll also add that I was going to school on the Fenway, which, at that time, was a very unsafe area to go walking around in at night, and I often stayed late to do extra work in the studio, like most of my classmates did, at the time, so having a car did help.

Relax, give it a break,

Relax, give it a break, everyone behaves badly in Boston. It's the stress of striving to be a world class city.

Do. People. Keep. Doing. This.

I mean, okay let's say you've never been in that intersection before... sure it can be confusing. It's pretty clear though where the road is, and where it isn't. Still, even if you did make a mistake, and aimed towards the tracks you should be noticing, "oh hey - no pavement" before you actually get in there, and be able to stop and turn into the correct lane... Why do people drive all the way up the tracks when they make this mistake?

That's what I can't sort out

The whole lack of feedback loop and mismatch warning thing.

Have I almost turned on to "roads" that are not "roads"? Sure ... but I don't do so at a speed that doesn't allow second guessing even when navigating with a GPS. I see that there is a big drop off or gravel or tracks and don't go there. Big Nope. Look before you leap.

And lets never forget that GPS can sometimes fail and screw up due to limits of positional accuracy and the mapset it is operating with. I don't fully trust it anyway. Downtown, I am constantly counseling lost tourist flocks and families to follow the map and ignore the directions because even my garmin doesn't work in the dense tower stacks.

Part of the problem is that people fear getting off course - like the land of their GPS is surrounded by dragons and godzilla and scary urban monsters and doesn't permit ever rerouting or something.

I agree with most of this.

I agree with most of this.

But I've gotten screwed in several places along Comm Ave when I missed a crucial median gap (which of course had no signs saying what street it led to), and got stuck going really far the wrong way before there was a chance to fix it. So going off-course can be a problem.

For example, you can't turn right on Washington from the westbound main roadway. You have to know to get in the service road back at Fidelis Way. If you try to fix it by making a u-turn at Colborne Road, then when you get back to Washington you can't turn left, so you have to go east to Warren to turn around again.

Once I missed the left off Comm Ave eastbound at Linden, or possibly the u-turn in front of Herb Chambers, and the next legal u-turn was at Agganis Way, all the way past Packards Corner and then some. That was quite a hairy turn in itself, with the trolleys and opposing left turning vehicles.

Would it kill Boston to put up some guide signage, in the places where you have time to make an informed decision about where to turn? Something like this: https://goo.gl/maps/DZFRfPpj9iL2

They only got about one car

They only got about one car-length onto the tracks before stopping. https://goo.gl/maps/ENf2jqwZYyx

I can see why this happens here all the time. It's an intersection with really confusing geometry, and Boston gives you very little help in the way of road lines or signs.

There's no lines guiding the two left-curving through lanes of Comm Ave to the right place. Meanwhile they cross a trolley track at a very close angle. The medians have no signs or poles with reflectors -- just traffic light poles which are painted *black* to make them as invisible as possible. https://goo.gl/maps/hwaXz7msmjE2

So I could see why someone would follow the rail at night.

The guy didn't notice he was driving on railroad tracks because it felt just like every other Boston road.