Honoring a Medal of Honor recipient in Brighton 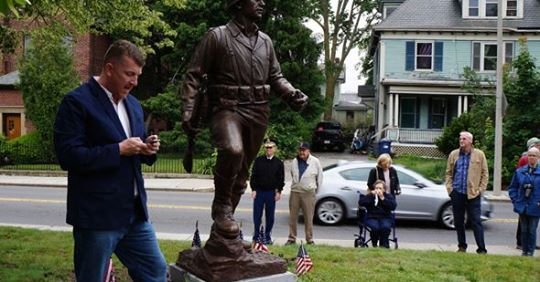 Brighton residents and Ernest Prussman's surviving relatives gathered at Murdock and Cambridge streets this afternoon for the formal unveiling of a statue in his honor - along the route he took every day to get to Brighton High School across the street.

Prussman was awarded the nation's highest military honor posthumously for his activities on the battlefield on Sept. 8, 1944, in Loscoat, Brittany, in France. Rick Holahan, who spearheaded a three-year effort to get the statue built, recounted that Prussman led a group of soldiers to clear out German artillery, machine-gun and sniper emplacements that had managed to pin down two American battalions.

As 50 people listened, and as a large American flag fluttered over Cambridge Street from the top of a BFD ladder, Holahan read Prussman's Medal of Honor citation: Prussman jumped across one hedgerow and captured some German riflemen. Crossing a second hedgerow, he came across a machine-gun position - and managed to force its soldiers into surrender.

Again advancing ahead of his squad in the assault, he was mortally wounded by an enemy rifleman, but as he fell to the ground he threw a hand grenade, killing his opponent. His superb leadership and heroic action at the cost of his life so demoralized the enemy that resistance at this point collapsed, permitting the 2 battalions to continue their advance. Saluting as the Star-Spangled Banner is played (that's BPDA Executive Director Brian Golden on the left): Holahan said he and others began the effort to honor Prussman while cataloging Allston/Brighton's "hero squares." They came across the one for Prussman at Faneuil and Goodenough streets, and thought the Medal of Honor winner deserved more recognition. Boston College's Neighborhood Task Force donated the money, which the group used to hire Bucaccio - who said that while he had plenty of stories to work with, he had just a single photo of Prussman on which to base the statue.

Nice to see a high quality

Nice to see a high quality statue honoring someone instead of an abstract gobbledegook nonrepresentational thingy or a cold granite tombstone looking plinth.

Sad that the city with all its history doesn't have more statues and fountains and what ones it does have mostly aren't well taken care of.

Thank you for highlighting this.

Ernest Prussman was my Grandfathers nephew! I just happened across this story as I was looking into family information! I would love to be in touch with any of my family who worked to have this statue made to honor Ernest! My Grandparents Fred and Mary Prussman lived on Murdock street until around 1967. I spent quite a bit of time visiting there! I plan a visit in Nov. and look forward to seeing the statue! Thank- you!

I also have a photo of Ernest! A head shot in his uniform! It may be the photo you already have! Melodie Penton

Was visiting my Sister who lives here in Brighton and had seen this statue of the soldier .Was curios and discovered that this soldier was the most honourable of men in the face of a fearsome battle.
I would like raise a glass to his honourable feat and for his fight for freedom of peoples in Europe and the world .May we never forget these great men
Regards
Noel Garland
Dublin
IRELAND

Burglars target MacBook Pros in Allston/Brighton break-ins; police tell residents, especially college students, to lock their doors and windows
Time to move the donuts across Cleveland Circle
No Freudian slip: Board approves new apartment building called the Sigmund off Soldiers Field Road in Brighton
New sign, who dis?
Oak Square gets some time in the roaster pan after power goes out
Some passengers on a Framingham-bound train forced a door open to escape after nearly two hours stuck with no AC in the sun in Brighton