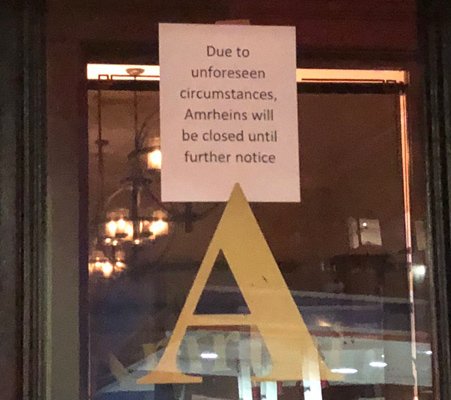 Amrheins on West Broadway got the OK from a city health inspector today to re-open after it fixed a series of violations found last week, including letting a food-handling employee ill with an infectious disease keep working in the kitchen.

A spokesperson for the Boston Public Health Commission declined to specify the illness, but said "there is no evidence at this time that indicates the community at-large is at-risk."

In an Oct. 19 inspection, the restaurant had also been cited for keeping salad fixings and bleu-cheese dressing too warm, workers not adequately washing their hands during their shifts and having a kitchen sink meant only for hand washing filled with pots.

Also, workers were keeping raw chicken next to raw shrimp and scallops, and the kitchen had flies flitting around, with a rear door open without a screen.

As one of the conditions for re-opening, the restaurant had to show a manager had undergone training in what to do when a food-handling employee shows up to work with a potentially communicable illness.

The restaurant property is currently for sale as a potential site for new development.

I can't believe that place is

I can't believe that place is still open! I was eating there almost 30 years ago....good god I'm old!

I doubt they care much at this point since it's closing soon. What is management going to do, fire them?

The owner supports everything.
Shame it could be closing
Our loss
40 year supporter and still am

it appears the owner supports everything except food safety.

Amrheins is one of those places which makes South Boston South Boston - very sad to see it go. But I can never order food in there again.

Get ready for all the comments railing about yuppies and losing the old neighborhood - just remember this place chose its own fate.