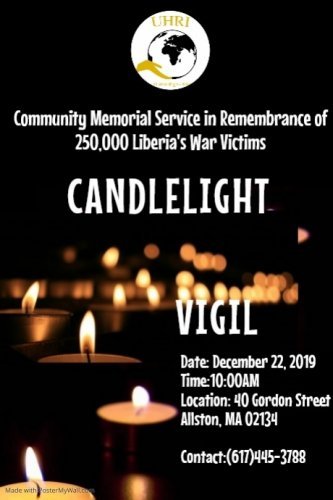 The Liberian Civil War claimed 250,000 lives including five (5) American Nuns from Ohio. Although Liberia was an American Colony Founded by high ranking American Government officials to remove and colonize all mixed race and free African Americans, thousands of refugees displaced by the war across the United States have been denied access to humanitarian assistance and permits to work like refugees of other wars. Still, on December 22, Liberians will gather in Allston to remember the dead and press the United States Government for equal protection afforded other refugees.

"Many of these refugees are descendants of African Americans removed and colonized by the American Colonization Society (ACS) in 1822 simply because they were mixed race or Black Americans. Many Liberian Mothers and their American born children were also airlifted to America to care for their American born children. If America protects cats and dogs during the winter from cruelty and abandonment why has Democrats under Obama and republicans under Bush and Trump denying Liberian Refugees access to humanitarian assistance and permits to work for the past 17 years?" Asked Pastor Torli Krua, an advocate for equal protection for Liberian Refugees.

This article from the Washington Papers explains the 200 year discrimination against Liberians.

[Sketch of the coast of Liberia. Courtesy of the Library of Congress.]

The American Colonization Society (ACS), founded in 1816, supported the mission of removing free African Americans and freed enslaved individuals from the United States. The concept of colonizing a portion of the national population was founded upon the belief that America could not exist as a multi-racial society. Between 1822, when the colony of Liberia was founded on the western coast of Africa, and Liberia’s independence in 1847, the ACS facilitated the emigration of more than 11,000 black Americans to Africa. The federal government gave no funds to the venture.

The founding president of the ACS was George Washington’s nephew Bushrod Washington. Bushrod’s prominent surname lent an air of legitimacy to the society; in addition, he was the godfather of one of the leaders of the movement, Charles Fenton Mercer.1 From the beginning, contemporaries debated whether abolitionist convictions or proslavery beliefs fueled the colonization movement. The second annual report of the ACS, following a scouting mission to Africa to determine the cost and feasibility of a new colony, put forth the following scenario: “If, as is most confidently believed, the colonization of the free people of colour, will render the slave who remains in America more obedient, more faithful, more honest, and, consequently, more useful to his master, is it proper to regard this happy consequence to both, as the sole object which the Society hope to attain?”2

[Flag of Liberia, as featured in a pamphlet from the late 19th century. Courtesy of the Library of Congress.}

Bushrod Washington described his conception of the ACS mission in a speech at the society’s third annual meeting on Jan. 8, 1820. He announced “that the time is not far distant when, by means of those for whose happiness we are labouring, Africa will participate in the inestimable blessings which result from civilization; a knowledge of the arts; and, above all, of the pure doctrines of the christian religion.”3 In other words, Bushrod claimed that the ACS mission would have a two-pronged positive outcome: emigrants from the United States to Liberia would be rewarded with a life in which they could be treated as equals, and in turn, they would spread “civilization” to native Africans, which would result in “inestimable blessings.” This was a common contemporary argument in support of colonization.

An associate justice of the U.S. Supreme Court for more than 30 years, Bushrod owned slaves. He inherited the Mount Vernon estate following Martha Washington’s death in 1802.4 When Bushrod officially moved in, he took his slaves with him. He eventually became frustrated by the gossip on the estate related to his famous uncle’s decision to free his slaves upon Martha’s death. As Bushrod explained in a letter to the editor in the Sept. 29, 1821, issue of the Niles Weekly Register, the estate “has at times been visited by some unworthy persons; who have condescended to hold conversations with my negroes, and to impress upon their minds the belief that as the nephew of General Washington, or as president of the Colonization Society, or for other reasons, I could not hold them in bondage, and particularly that they would be free at my death.“5 Bushrod informed his enslaved population in no uncertain terms that this would not be the case.

[Certificate of life membership to the American Colonization Society. Courtesy of the Library of Congress.]

Appalled that his slaves believed they might one day be freed, Bushrod gathered them together in 1821 to make it clear that he would not be freeing anyone—ever. He demanded that talk of future freedom—a rumor that had made its way throughout the estate—cease immediately. The enslaved individuals responded by attempting to seize the freedom denied them and planning their escape. However, their fate became even more troubling. When Bushrod discovered the plot, the ACS president did not encourage his disobedient slaves to emigrate to Africa. Rather, he sold 54 of them, sending them down to the Deep South in Louisiana—a punishment to be dreaded.6 Bushrod Washington died in 1829 and kept his promise not to free his enslaved workers.

In the end, African colonization proved to be fraught with hardships for emigrants from the United States. Religious division, lack of supplies, disease, and cultural clashes between African Americans and native Africans made the colony something far from the ideal solution depicted by the ACS.7Nevertheless, the society continued to recruit members during and after the Civil War, and in the twentieth century it focused on education and missionary work. The American Colonization Society was officially disbanded in 1964.

Allston party ends when woman falls off second-story balcony
Building with 120 apartments proposed on Braintree Street in Allston
Citizen complaint of the day: Pursued by a snarling hellbeast across the desolate plains of Lower Allston at midnight
Board rejects conversion of Allston laundromat into an apartment after nearby tenants express concern about where they'd wash their clothes
Allston hotel that once served warm cookies at night to foreign-dignitary guests was unprepared for the sort of guests attracted by bargain pandemic rates
Orange Line not alone; Green Line power blown