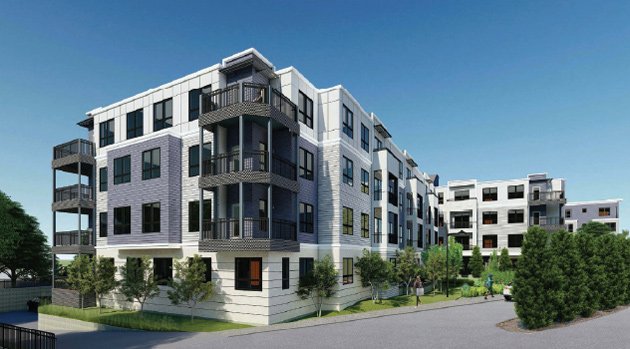 The Zoning Board of Appeal yesterday approved a proposal for 70 apartments and 18 town-home condos between Gardner Street and Charles Park Road - which includes weekday shuttle-bus service to the West Roxbury commuter-rail station on Lagrange Street.

West Roxbury developer Peter Davos's new buildings would go behind the recently opened 80-unit Oak Row Apartments he built on VFW Parkway, next to the Home Depot parking lot, where the IHOP used to be. Some "non-descript" residential and industrial buildings will be razed.

The apartments, which would include a mix of 1-, 2- and 3-bedroom units, would sit on the Home Depot side of Gardner Street, in a four-story building with 70 parking spaces. The condos would be in two nine-unit buildings between the other side of Gardner and Charles Park Road, separated by a landscaped courtyard. Each of the condos would have a driveway with space for two cars.

Nine of the apartments will be rented as affordable; two of the condos will be sold that way.

Davos's attorney, Joseph Hanley, said the new units would provide "much needed residential housing at this transitional edge section of the neighborhood," which now contains a mix of large-scale retail use, single-family homes, industrial buidlings and office buildings - one of which houses the headquarters of Pizzeria Uno, surrounded by Millennium Park and a large marshy area off the Charles River.

Aides to Mayor Walsh and city councilors Matt O'Malley and Annissa Essaibi-George spoke in favor of the proposal, although both O'Malley and Essaibi-George say they hope Davos can take steps to make the buildings more energy efficient during required final design review with BPDA planners.

The BPDA board approved the project in October.

Pink shows the 1.4 acres Davos will use: From Forest Hills to West Rox, with a station at VFW Parkway to serve this, plus the VA. Extend the Green Line to Needham. Free up capacity at South Station. Etc.

Green line to SS wouldn’t free up capacity at SS. Let’s see a 20-25 commuter rail ride or a 45-60 green line ride to Needham. What would you take.

How about the orange line and every other line

if fixed so they are consistently reliable before there is any thought of extending any line.

No.
This city is already under perpetual construction as it is all these "improvements" just shuffle inconveniences around. Detours delays no matter when and where. If everything is in regular order is it efficient? We will never know.

Who will pay for it. Taxes go up lower class can't live around the area to serve these condo owners and won't be able to live in this city.
No.

So we need less construction and fewer residents so the city has a lower tax base and a lower budget so poor people can still live here?

This will be fine

Parkwayne covered most of my thoughts. Specific to this project, when they built Oak Row it caused ZERO issues with traffic on the VFW. If I lived in that one last house that will be right next to this, I might be concerned, but for the rest of us, this will have no effect on local traffic.

I was going to mention that

Rumors were swirling that they were going to terminate all the 36 runs at the VA, but in the end it looks like there will still be runs stopping a block away from this proposal.

Not to say that implementing the proposed Orange Line extension to the Parkway wouldn't be good, but it wouldn't be necessary for those who will live in these apartments to be able to have T access.

Me. I will pay for it. Please

Me. I will pay for it. Please raise my taxes as necessary to help fund necessary city and state services.

Also, the "lower class" doesn't need you to cry on their behalf. They're more than capable of advocating for themselves.

What about the disappeared

What about the disappeared trolley that served the VA Hospital JP?

That the T wanted to stop at Brigham Circle but kept running to Heath Street so people could get to the JP VA hospital? No, not right in front of the main entrance, but that would have caused some major issues (like where to turn the trolleys around).

Heath street triangle was the

Heath street triangle was the turn around for trolleys leaving Park and going to Arborway. The trolley ran from Arborway to Park, passing the Dublin House and Triple D's , noted drinking emporiums of the day. Thats the trolley I speak of, plus you could get to the Medical area and the education houses, too many to list. As an added feature you could get to the MFA and Gardner museums ? , and if you wanted to be adventurist , Fenway Park. It was a versatille thing , the Arborway trollley. Nothing personal against Heath Street .

this is probably the LOWEST hanging expansion project the mbta has on the table right now, it would change a huge amount for rozzie/westie and enable better transit access into dedham (right now has ONE bus route?? essentially inaccessible.)

...that the same people who freaked out about the road diet would also be very, very afraid of a direct connection between West Roxbury and Forest Hills and points inbound on the Orange Line.

even provincial small minded selfish people can be convinced to do something when there's enough $$$ for them in it. This isn't the red line forty years ago - we have so much evidence that bringing rapid transit in means BIG BUCKS for you selling your house in four years to move down to Florida. They'll go for it.

West Roxbury quietly catching up in the development game lately bringing some good projects online. Good to see. Matt O'Malley deserves credit for guiding this stuff through, particularly with the significant NIMBY contingent there opposed to everything.