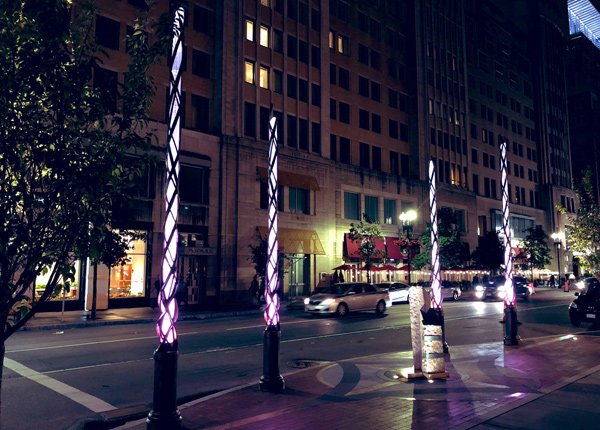 The two Boylston Street memorials for the four who died at the hands of the 2013 Marathon bombers were formally unveiled tonight. Chris photographed them.

according to wikipedia dennis simmonds also gave his life trying to apprehend suspects.

Yes, it is frustrating that

Yes, it is frustrating that Officer Simmonds is not more widely recognized for his heroics and ultimate passing from injuries sustained in the gun battle in Watertown. Just because he didn't die immediately doesn't make it any less tragic or him any less a hero. It bothers me we seem to only recognize the four victims, taking nothing away from them of course.

You'll be happy to know that the Globe mentions Simmonds and the plaque commemorating him in its article today.

Simmonds was given an after-thought brick in the sidewalk

Next to the four light towers. The memorial is a travesty. Rip it down. Try again. They have 8 of those light towers at the two Bolyston sites. Have a tower for EACH person. Melt down the others.

We have all degree of grey here and I guess they chose to draw the line somewhere.

not gonna make any friends here but,

Collier got ambushed while sitting in his car.

A lot gets lost in our 24/7 constant state of fear but we gotta be careful,

Simply wearing a badge does not a hero make.

In case you forget, our entire city was on alert in the wake of the bombings. As such, every man and women in uniform was also on alert, ready to to take action to protect others or to prevent another tragedy. In this case, yes "simply wearing a badge" (as you put it) does make Collier a HERO.

You should be ashamed of yourself. But the fact that you took time to pen that comment leads to be believe you're just a biased troll, anti-police zero.

By that metric the meter maids were heroes that day too. And Brinks truck drivers, and Target security guards, for that matter.

If everyones a hero, you can never tell who the bad guys are.

I hope (for you) that you're just a super troll, because you make zero sense - sad.

You don't like Police, we get it. Move along now, back to Mom's basement.

FIVE people died at the hands

FIVE people died at the hands of the marathon bombers.

The memorial includes stones for the three people who died in the bombing - Martin Richard, Lingzi Lu, and Krystle Campbell, as well as plaques for both Sean Collier and Officer Dennis Simmonds who died after the actual bombing.

Move the Collier Spire to MIT. Have a Simmonds Spire in W-Town

Rearrange the three spires at the bombing site. Right now the memorial is a hodge-podge of different levels of symbolism. Collier will have a fitting memorial at MIT. The high profile corner at Mt Auburn and Franklin St in Watertown will host the Simmonds spire. Nobody is forgotten. No incident is forgotten. Everyone is honored appropriately

last nights news segments on this were more than a little weird?

"Look maw, get a pictute of me leaning over and pointing to where that kid died."

FIVE.
Officer Dennis Simmonds makes FIVE. He gave the ultimate sacrifice and his repeated refusal to be recognized as such by multiple sources is sickening. His family, like the other four families, is still grieving his loss.
There are two bronzed bricks placed at this memorial, one for Officer Collier, the other for Officer Simmonds. Please adjust your post to honor his life and memory.
Rest in Power, DJ.

Does anyone know how this art installation is going to be maintained (cleaning, repairs, when one of the lights blow out, that sort of thing). Who will maintain the structure? The city?

Nothing worse that having these things put in and forgotten and then over the years they become eye sores.

The entire installation cost $2 million dollars so it would be nice to think that there is a plan to maintain it.

No reason to think the worst

It’s on city property, so I’d imagine the city will keep it up, as they do with most of Boston’s other statuary.

I can appreciate your concern, but with respect, such fatalism seems a bit misplaced, as folks around here (ie New England) seem to be pretty dialed in on maintaining and respecting memorium, sometimes to a fault.

It's called public art. They don't just stick it there and leave it.

Google would probably answer your questions better and faster than uhub.

Clearing up confusion at the memorial site

There is some confusion because of the bipartite nature of the memorial -- it actually has two similar sites each of which features:
Cherry Trees, sculptural light poles, brick and stone pavement and the Granite Stone Pillars set on a low bronze podium.

First as for the light poles -- some think that they represent 4 victims -- not the case -- just the need for adequate lighting -- and there are actually 8.
Similarly the cherry trees don't memorialize the victims they are there to bloom about the time of the Marathon in perpetuum -- sort of like an eternal flame

Two of the Granite Stones are fused together to memorialize 8 year old Martin Richard [from Franklin Park near his family's Dorchester home] and 23-year-old Boston University graduate student Lingzi Lu [Donated by BU from the BU Bridge]. They rest on a low bronze podium with an inscription

"Let us climb, now, the road to hope"

and near and surrounding the stones are the cherry trees and four light poles.

"All we have lost is brightly lost"

. As in the other site there are cherry trees and 4 light poles.

Both sites also have brick and stone paving with designs in place of the standard sidewalk and the actual edge of Boylston St has been altered by introducing a curving curb thereby bulging the sidewalk into the street.

Ironic that this easily blew past permitting and whatever organizations wanted to have a say (at a cost of $2 million) and yet the idea of a permanent installation memorializing the horror of slavery was torn apart via politics.

Perhaps in Boston the history of Black people is just not important enough.

Ask the local chapter of the

Ask the local chapter of the NAACP about that.

Not Ironic & not in the same league

Its actually quite an insult to the people who were victims of the bombing to make your statement -- those who:

Finally to put your comment in its proper perspective --- the relevant comparison to a "Slavery Memorial" are other the memorials in Boston to events relevant to Boston but not of Boston such as: the Irish Famine, Hungarian Freedom Fighters, Armenian Genocide, etc.

and of course the Holocaust Memorial

While we're on the subject of memorials

how about placing a proper memorial to the victims of the Cocanut Grove tragedy. A small plate embedded in a sidewalk is hardly a fitting tribute to the memory of the 480 who perished in the fire.

Northeastern continues moves across Mass. Ave., buys Horticulture Hall
Wayfair, which got tax break to hire people, lays off 350 in Boston
Green Line gets pokey when a trolley gets smokey
If love locks are outlawed, only outlaws will have love locks
Love-lock fence would have to go: Developer proposes 17-story building with hotel, condos at Mass. Ave. and Boylston Street
Green Line riders sighing once more: Another new trolley with a broken door