The Huntington News reports Northeastern University wants the National Labor Relations Board to rule that non-tenure-track professors are managers ineligible to unionize, no matter how poorly they might get paid.

Oh, because they are really still students if they are under 30?

Oh, cool, I didn't know that the (expletive) paying customers were subordinates.

What a complete garbage organization Northeastern University is. Between kicking their workers around, and straight up lying to high school kids through the US News rankings scam, I hope that they fail in my lifetime.

Lori Loughlin is a garbage person, but I hope that her actions once and for all make society realize how dirty the U.S. college business really is, and how they, in league with big federal government, artificially inflate their prices and accessibility. It's long past time for these sacred cows to be taken down.

the class of "managers"

that has taken over higher ed and secondary ed over the last two decades is comprised of reprehensible vile careerist trash. they want to break everything, including the lives of people who answer the call to be scholars and teachers. Teachers are not made, they are born. But not in multitudes like the vile carnival barker edu-whore scum suckers who breed by the billions in a ditch like maggots.

Universities really do treat anyone not a dean like trash

They should be able to unionize because they have been taken advantage of for a very long time. If you don't get that tenure track you have a phd and no financial security but at the same time they want you for the advancement of knowledge the university gets credit for. They don't get compensated fairly for putting out all those papers and make you feel bad for wanting more for your own life, like it should be this pious dedication to knowledge rather than taking care of you and your family. Too often high paid administrators are the ones doing little to advance learning while working adjuncts like steer. Do away with all the high paid admins and you can have an affordable educational institution and professors can actually earn a decent living.

In a perfect world..

Not only would NU be on the losing side of this but moreover, let's hope these folks are classified as non exempt employees and NU gets slapped with a mega overtime back pay outcome

Until it hits them in their own pocketbook.

Coming from the man who loses his mind over AOC and Bernie.

Who is losing their mind?

Me saying the emperor and empress of American socialism have no clothes, or all the people foaming at the mouth over crazy ideas that would cost trillions of dollars we don't have?

Honey, the socialism whine is so so old. It's an atavistic throw back to a time when Joe McCarthy drank like a horse and had a great time tearing people down.

Are you seriously comparing someone who has an issue with socialism, even when it is of the Western European variety, with Joseph McCarthy?

Oh, someone needs to read their history books.

There are two classes the working class and the exploiting class. Adjuncts get paid poverty wages and do so for their own labor. Administrative union busting often relies on false promotions.

Regardless of whether they can unionize

Northeastern University and other universities should at the very least treat their adjunct professors fairly. This is the dirty little secret of many colleges and universities these days. More and more of the workload is dumped on adjuncts who are usually not paid well. They are often limited in the number of classes so that they fall below the threshold for eligibility for health insurance and have to work at multiple institutions just to make ends meet.

This is not just a Northeastern problem.

95% of the work these people put out is garbage, even though the schools are quick to tell you with a straight face that they're the only thing that stands between civilization and medievalism.

If they're researchers...most research doesn't go anywhere. No way to fix that, but the straight-faced and sober declarations that every bit of "scholarship" is a dead-serious struggle against the forces of anti-intellectualism and chaos would be laughable if it weren't infuriating.

If they're teachers...well considering a whole lot of people get useless degrees that render them no more educated than they were to start with but a whole lot more indebted...then that's not so good either. But of course the higher ed fake news machine has been going full tilt for so long, it's obligatory to mention that "workers with college degrees on average see a $WHATEVER percent gain in their lifetime earnings."

If they're administrators...I'm sure they're very industrious but the thing they're industrious at is coming up with new and interesting ways of being offended at objective reality...which is on the whole something we can all do without.

And on top of that...from grad students to post-docs, to adjuncts, and everything in between, a whole cohort of people is being taught that poverty is the norm and that seeking gainful employment in the private sector is suspect. Nothing to envy beyond the walls, after all. And then they also get buttered up to believe their parochialism is what marks them as smarter than everyone else and qualified to tell everyone else how to live.

Where have we seen this before? It's a cult. Maybe there is something to this notion that there is a religious circuit hard-wired into the human mind, and that absent the conditions under which it evolved (material scarcity, high mortality, hunter-gather subsistence or agrarianism and low population density), it's wreaking havoc. Academia is the worst of religion. All the ritual and the self-imposed suffering, but very little in the way of spiritual enlightenment or social cohesion.

I'm going to go out on a massive limb here and suggest you only know about higher ed through hearing about it from cable news.

No, my opinion is informed by a whole lot of experience on the inside.

Yes, but it begs the question

Yes, but it begs the question: the inside of what?

95% of the work these people put out is garbage

Dude, you've gotta stop talking about yourself in the third-person plural, it's very weird.

"95% of the work these people put out is garbage"

You've done a study? Published it someplace to share your methodology? Are you sure it's not 97%? 88%? The smartest boy in the room act gets old, especially when you lead with someone as inane as your made up statistic. Now pipe down.

Sweetheart, you're sounding a bit unhappy. Have you thought about what things you can be grateful for today?

It's not that secret. 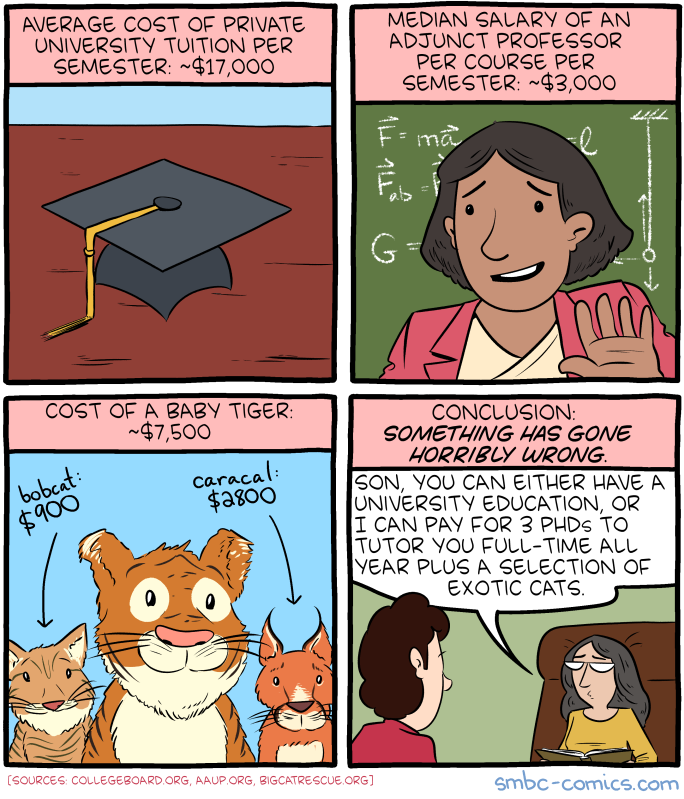 Love me some caracals. Bobcats will do.

I work at a medium sized university here in MA so I'm posting this anon; but this is 100% accurate. If you look at the number of FT and tenure track teaching positions it is going down across the board. I know many very good professors who had to move to the mid-western states to find a tenure track position.

Universities and colleges have found it much easier and cheaper to pay 4-5 adjuncts a few thousand per 3credit course than to pay one FT professor with benefits, etc. I know our school has gone through this as has every other school I am aware of with the exception of research positions which are usually grant funded anyhow.

The quality of education suffers as adjuncts teach 1 course at 3 or 4 different universities (at a minimum), with different LMS and email systems, requirements, etc. There are some very fine adjunct professors out there but the lack of continuity is a significant issue IMO.

I feel like I'm rooting for the professors on this one.

Tenure-track faculty need to stand up for adjuncts

Rutgers University (the state uni of NJ) faculty are unionized almost went on strike this month - their demands included better pay for grad student TAs and for adjunct faculty, as well as for pay parity between the school's 3 campuses (equivalent to UMass, Amherst faculty demanding pay parity for UMass, Boston faculty).

Faculty at more schools need to take this stance and support their fellow teaching staff.

Are there variations in law

Are there variations in law between states that make it easier or more difficult to unionize university teaching staff?

We will fight them in the trenches

That NLRB is so booogus, saying that "full-time, non-tenure track faculty can only be labeled as managers if they have specific managerial duties."

They have to work unpaid overtime, don't they? That's totally managerial.

Why is it that any time I

Why is it that any time I hear any details of NEU's labor practices, it's not anything good?

all a university wants

is to liquidate the idea of a professoriate until such time as paying the private corporations that run them 100k bucks is something you do on an obligatory basis when you turn 17.5 years old, and then you are eligible for a job in the panopticon surveillance state spying on others to make sure they are not deviating from the same enslaved path you found yourself subject to.

and this is exactly how the poster named Romaine, the right wing fringe from Magagagaland named after a recalled lettuce, would have it.

Coming from he borderline for

But education is a business?

And human beings are resources. Shouldn't efficient businesses pay the lowest cost for their resources? Human beings or electricity. Both resources. What's the problem?

The problem - well, I don't know enough to have any idea. I do know money is part of the problem. Too much or too little?

Universities are charging lots of money and yet doing their best to keep the salaries of their most important employees at the lowest level possible.

Meanwhile the competition that doesn't have as much money is disappearing.