When trolleys ran through Kenmore Square, instead of under it 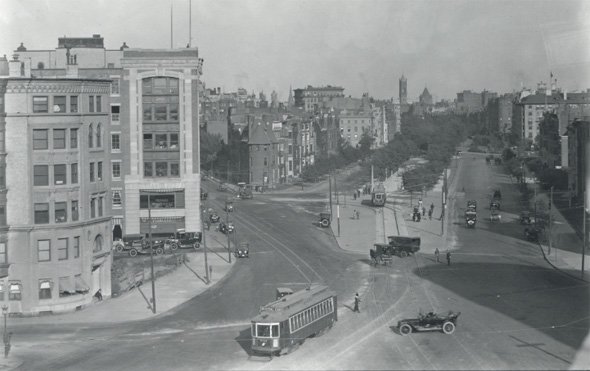 An almost bucolic Kenmore Square, sometime before 1921. Photo from the Boston City Archives.

A developer's plans to remake Kenmore Square won't be the first time the Boston crossroads gets a major makeover - and it probably won't be the last. Thanks to Digital Commonwealth, we were able to set the Wayback Machine way, way back to the days when Kenmore Square - Governor's Square in the old days - still had a fountain (built and maintained by the MSPCA) for thirsty horses: The photo shows the square sometime between 1908 and 1910, and is also from the Boston City Archives.

In 1912, the square looking west still had a somewhat lonely appearance (and, yes, that's the Hotel Buckminster, constructed in 1897; source): The streetcars of the Boston Elevated Railway used to emerge from (or head into) a tunnel just east of the square. In the first photo, note where the Citgo Sign is now (source for first photo; source for second): In 1931, though, the trolley tunnel was extended into the square itself, for a new Kenmore Square station that opened the following year (bonus fact: The station was built to allow the tunnel to continue under Commonwealth Avenue so that what is now the B Line could become a regular subway line; that, of course, never happened; source): You can still see part of the mouth of the "incline" the trolleys took a bit further inbound on the Commonwealth Avenue Mall.

Even before being joined by the Hotel Commonwealth, the Buckminster was never the only hotel in the square. In fact, the square got its current name from the Hotel Kenmore, originally the Kenmore Apartments, today the Kenmore Abbey apartments for senior citizens (it was the hotel where visiting teams would stay for games at Fenway).

Another one of the square's hotels, the Myles Standish Hotel, also still stands, but now it's a BU dorm (source): Also still standing: The Somerset Hotel,now residences, just outside the square, on Commonwealth Avenue at Charlesgate.

Zipping ahead a few decades, we come to the Kenmore Square of the Rat, the Deli Haus, Pizza Pad and, of course, the Mayor of Kenmore Square himself, Mr. Butch (later basically evicted to Allston by BU so as to not unnerve the oh so genteel patrons of the new Hotel Commonwealth):

Related question: The apartment building on the Northern side of the square which is on the corner of Beacon & Deerfield has been vacant since at least the 1990s, maybe longer, except for the small convenience store (recently closed) on the ground level.

The exterior is stately and it's super prime real estate given the view and location. I gather it was owned by BU. Anyone know why it stayed vacant for so long?

It's scheduled to be demolished and it's too bad they couldn't at least keep the classy facade.

The store used to be a record store

I remember seeing a Psychedelic Furs record there (circa ~1983) and thinking, "What an odd name."

There used to be a guy who parked his van across from there and rented roller skates. He would sit and practice his electric guitar while waiting for customers. I rented skates from him once and ended up flying down Beacon Street onto School Street and nearly killing myself.

There were two record stores in Kenmore Square

If you look at the photo looking down on the Hotel Buckminster, NE Records was kitty corner from the Buckminster. The rounded corner building, the side street is Deerfield. My dad worked in the building next to it, on Deerfield. NE Records may have been called New England Music City earlier, don't recall. The New School of Photography, Narcissus, The Aegean Fare restaurant line Beacon St after it. Sure I am missing some other business.

On the other side of the street was another record store, Galaxy Records. An old building that had the facade updated in the sixties, always looked a little odd. Had the Kenmore Army Surplus Store, some clothing stores and Galaxy Records. Had gotten kind of sketchy by the time the torn down the building and built the Commonwealth Hotel.

It was New England Music City

which I think was a small local chain, though I don't remember where any other locations may have been.

Strawberries later opened on the other side of the Square, near the Rat.

I'm getting a "bad gateway" error on the city archives links. I assume that's an issue at their end?

Maybe they were down for a bit?

Try now. It just worked for me, but if you're still having problems, I can switch the URLs to the Digital Commonwealth versions, I think.

The square was actually re-named after the trolley stop,

...and the trolley stop named after Kenmore Street.

Governor square was laid out and streets named long before the Kenmore Hotel/Apartments building was constructed. I published an exhaustive history of the square back in 2013 with complete historical sources cited.

In those days, the Boston Elevated Railway named subway/trolley stops after a nearby, intersecting street name. In 1913-14, the "Boylston Street Subway" terminated in what was then called Governor Square. The trolley terminus station was named "Kenmore Station", after the adjacent Kenmore Street. The street names, including Kenmore, are seen on street maps as early as 1895.

The Kenmore Hotel opened in 1916. The hotel was originally planned to be placed at the corner of Kenmore and (West) Newbury Streets, opposite the Hotel Wadsworth. Given the timing, it's more likely the hotel was named after the adjacent street and/or trolley stop.

Hotel buildings were typically divided into two sections in that period of time. One section for long-term residents (apartments) and a second section for transients (hotel). The terms "apartment" and "hotel" were used quite interchangeably in advertisements of the time.

As early as 1926, the square was informally being called "Kenmore Square", undoubtedly due to the trolley stop. It was in 1932, with the completion of the underground station in the square, that Mayor James Michael Curley signed a bill changing the name to "Kenmore Square".

You can read the entire written history at the web site for Grahm Junior College which owned two former hotel buildings and one bank building in the center of Kenmore Square in the 1960s to 1970s. I studied there for two years.

MFA springs a leak
Make Way for Ducklings: The musical
Woman pulled out from under Green Line trolley at BU Central
One guess what a developer wants to turn the old Hotel Buckminster into
Fenway gyro place closes
Gang rode the Red and Green lines with a crowbar at rush hour, robbing and beating people, police say