Zoning board denied more time for project at heart of federal charges, then two weeks later approved it 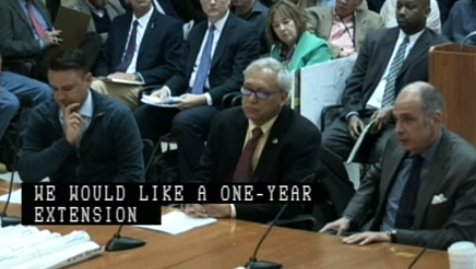 The Globe fills in some more details of the incidents that led federal prosecutors to charge a mid-level BPDA official, John Lynch, with bribery in connection with a small South Boston project that needed new approval from the Zoning Board of Appeal so that its developer could then sell the whole thing at a profit to another developer.

On May 9, 2017, Steven Turner was scheduled to appear before the ZBA to seek an extension of the time in which he could build an 11-unit residential building on H Street, but he failed to appear. Because the project, first approved in 2013, had already received a two-year extension, board Chairwoman Christine Araujo moved to deny the request.

Board member Craig Galvin - a real-estate broker whom the Globe reports worked with Lynch when Lynch built a two-condo building on Ashland Street in Dorchester - opposed the rejection, but the rest of the board approved. Member Anthony Pisani recused himself because, at the time, he was working with somebody looking to buy the project from Turner, the Globe says.

If you turn up your volume, just before the vote, you'll hear the board's attorney tell the board:

I just spoke with John Lynch outside, who spoke with the applicant, who made him aware this morning that he can't be here. I really don't have any more details.

Turner and Lynch once worked together at the city Department of Neighborhood Development, which, among other things, figures out what to do with surplus city property, but at the time of the hearing, Lynch was working at the BPDA, in charge of overseeing leases at the BPDA-owned Raymond Flynn Marine Industrial Park in South Boston and the Charlestown Navy Yard.

Despite the denial, the project came before the zoning board again at its next meeting, two weeks later. This time, the board unanimously approved the extension - with Pisani again recusing himself - after Turner's attorney, George Morancy, apologized for the miscommunication that led Turner to miss the previous hearing and said the new extension was needed because Turner had found an oil tank on the property that needed proper disposal and because of negotiations that were required with the BPDA over an affordable unit in the proposal after Turner reduced the number of units from 12 to 11.

The US Attorney's office announced Lynch's charges - and his agreement to plead guilty, last Friday afternoon. It has yet to officially name the developer who allegedly paid him a total of $60,000 to help win the extension.

Who is the Boards attorney?

So Buddy Christopher is a special assistant to the Mayor (most likely until Brian Golden leaves as BRA head-then Buddy moves in), James Christopher is an architect who regularly does business before the BRA and ZBA, and Michael Christopher (with a degree in sociology from UMA) is the Director for Development Review/Government Affairs. Oh, and ZBA board member (who has all but been fingered as Lynch's insider), Craig Galvin's long time GF works at the BRA too. I thought Marty ran on abolishing the BRA.

That's some good leads here. BTW, the Walsh administration did abolish the BRA; they renamed it BPDA :)

An other striking fact is that all these actors (including the mayor) are concentrated in a small pocket of the City. They all live and/or work in the South East corner of Dorchester. The office of the Galvin Group is literally a short block away from that of Roche-Christopher Architecture, and it's not like there are a ton of other businesses around there. John Flynn lives up the street in Clam Point. Over half of the new developments in that part of Dot have a conspicuous Galvinggroup sign on them. All these incestuous relationships happen for a reason.

I don't think it's fair to blame the mayor for every corrupt official in the City, but he is showing very poor judgement by reserving too many of these jobs for his friends and neighbors, regardless of their abilities and integrity. This is not how you build a trustworthy, efficient and diverse administration. He deserves full blame for that type of patronage and should assume the consequences.

You made a funny point

An other striking fact is that all these actors (including the mayor) are concentrated in a small pocket of the City. They all live and/or work in the South East corner of Dorchester. The office of the Galvin Group is literally a short block away from that of Roche-Christopher Architecture, and it's not like there are a ton of other businesses around there. John Flynn lives up the street in Clam Point. Over half of the new developments in that part of Dot have a conspicuous Galvinggroup sign on them. All these incestuous relationships happen for a reason.

You must have moved to Boston after 2013, lest you would have noted the concentration of those mayoral connected in the southern reaches of Boston before then, or going further back, the time a long of people working in high levels of city government came from wards 6 and 7. As for the parties directly tied to this case, a developer and an architect having offices close to each other is not as far fetched as you would think. I am shocked that you think that it's amazing that the Galvin Group is working on projects close to it's office.

Has Marty retained personal criminal defense counsel yet? Might be time. The upcoming campaign spending reports will show if he is spending big on counsel. I know Walsh hasn't been charged (yet) but Speaker DeLeo (D-Winthrop) also not charged, has shown that spending a half million dollars can stave off most indictments. Reasonable doubt at a reasonable price. I wonder Marty's reaction this morning as his fellow Mayor Jaisel Coreia (D-Fall River) was lugged by the feds on a street corner for taking relatively small amounts of cash, marijuana and a "Batman" Rolex?

The John M. Lynch component is intriguing. Nobody walks into the US Attorney's office on Friday afternoon of a long holiday weekend and agrees to plead guilty to federal charges with significant jail time, unless a deal has been in the works for months or more. Did the deal involve wearing a wire? For how long, and who was the target? Lynch had no statutory influence with the ZBA so he was apparently just the bagman. For who? As Howie Carr said in his column, does anyone think this was Lynch's first time, at age 66, in or around City Hall since 1974? Developers shouldn't be the only ones sleepless. Melatonin sold out at Cedar Grove CVS!

Have you seen anything that ties Walsh to any crimes directly, rather than by association?

I guess it depends on what you think directly means.

However, if Walsh is unable to indirectly prevent a variety of corruption, abuse of power and lack of control problems continually crop up under his leadership, I'd argue that's nearly as damning as a direct indictment.

They had that whole trial and no one mentioned that Walsh knew anything about what was going on, let alone condoned or orchestrated it.

That if his proposal was denied, he could not come back to the board for a year? Or is that only for new applications, not permits?

So much for consistently enforcing the rules!

Yes, but apples and oranges

In that case, the developer was seeking approval for the first time.

In the Turner case, the project had already been approved, but he was seeking a time extension to use the permission he won. Why it showed back up on the agenda a week later is another issue, maybe, but extensions aren't the same as initial approvals.

I was introduced to John

I was introduced to John Lynch by another city of Boston worker as the guy that gets you through the permitting process.

I was opening a business downtown about ten years ago. Needed a bunch of permits and reached out to neighborhood development. I worked with a project manager. Mostly emails asking questions about permits and he did a sight visit to discuss some things.

He then brought in John Lynch to help me navigate a couple of the permits (signage was one) because I needed a few different board approvals. He was very helpful. All by the book, but definitely greased the wheels.

To that end, very nice man, but I'm not surprised he got caught up in this. I hope other people take a hit as well. He shouldn't be the scapegoat. I'm sure this isn't an isolated incident and he was the only one with their hand in the cookie jar.

Buddy Christopher takes a leave of absence from City Hall

The Globe reports he's stepped down as Methadone Mile czar while an outside law firm looks at the handling of zoning decisions - and adds that Christopher was the original architect for the H Street building at the center of the federal case but that he turned that over to his son, James, when he agreed to become ISD commissioner under Walsh.

There does not seem to be much to this case.

The most controversial part of a development is when it first goes before the ZBA. That is when everyone who is for and against a development comes out to voice their support or opposition. Often times, the developer needs to get approval from the neighborhood association (most important), the Mayor's office, district and at-large city councilors, etc. The project got through that and was approved by a majority of those on the Board -- so the most controversial part was done. Now the developer had yet to put shovels in the ground due to various issues (e.g., removing an old oil tank in the ground, etc). An extension is not a big deal since the project was already approved.