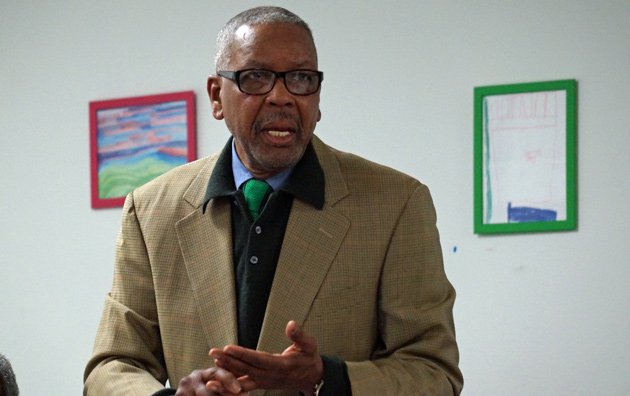 Bickerstaff explains his role in a proposed Roslindale pot shop at a community meeting in March.

UPDATE: The Globe reports Bickerstaff is quitting the zoning board.

Mayor Walsh announced this morning he's issued an edict that no city employee or appointed official can participate in a company that is seeking city approval for a marijuana-related business.

The order most immediately would affect Bruce Bickerstaff, a member of the Zoning Board of Appeal, who is part-owner of a company called Silver Therapeutics, which wants to build a pot shop on American Legion Highway in Roslindale. The proposal has yet to come before the zoning board for its required approval, but Bickerstaff has been recusing himself from hearings on other potential marijuana emporiums in Boston.

"I am committed to ensuring this new industry is fair, transparent, and equitable for all who wish to participate in it," Walsh said in a statement.

Walsh's order also bans the family members of city employees and appointees from participation in a pot business that requires city approval.

In case the ban is not clear enough, Walsh's statement adds:

The Office of Economic Development and any other City employees who participate in any grant of approval from the City of Boston, shall consider the participation of any City employee, or their immediate family members, in a marijuana business to be a negative factor that supports denial of approval of that business.

The Zoning Board of Appeal has come under scrutiny of late because of a bribery case involving a BPDA manager who pleaded guilty yesterday to taking money to convince a zoning board member to ensure a positive vote on a small South Boston proposal.

Federal officials have yet to identify, let alone charge, the zoning-board member, but board member Craig Galvin resigned last weekend. Walsh has hired a former federal prosecutor to look at the criminal aspects of the case and separately hired a downtown law firm to examine the overall issue of how Boston development projects are approved.

Separately, Walsh and the City Council tussled over the issue of marijuana-related zoning after his office asked the board to approve two proposed East Boston pot shops closer than the half mile allowed under a zoning condition proposed by the City Council and approved by Walsh.

That led to the board being short several members and alternate members, which has led to a number of applicants seeking deferrals on their hearings to ensure their proposals are heard by a full seven-member board.

Under state law, projects before the board need at least five votes - the board has held several hearings in recent months with just five members present, which means a single "no" vote would be enough to kill a proposal.

A band-aid for a gunshot wound

Marijuana licensing in this city is a worse version of liquor licensing. It's designed to line the pockets of politically connected crooks, some of whom made their careers locking people up for small time drug offenses.

Also needs to be noted that the requirement put in place by the City Council and Walsh creating a half-mile buffer between pot shops has established de facto neighborhood monopolies. Whichever shop gets permitted first wins the exclusive right to operate in that area. This outcome was eminently foreseeable at the time of passing yet councilors did the bidding of NIMBYs who do not want these shops near them, even though they likely voted to legalize weed. That half-mile buffer rule needs to be revoked and made much smaller, if not outright eliminated. It encourages corruption and favors those with connections who can get in first. Councilor Kim Janey to her credit has called this out as a major impediment to people of color getting these shops licensed and up and running in her district. Unfortunately, Councilors Edwards and Wu this summer demanded zoning board members pledge fealty to the buffer to secure confirmation, rather than talk about changing it.

If Walsh and the feds want to

If Walsh and the feds want to purge the ZBA of improper influences, they may also consider one of its most outspoken members; Mark Erlich.

Erlich is one of the three people who make motions and sway the votes at the ZBA -the others being board chair Araujo, and Galvin who just resigned because his name is front and center in the latest ZBA corruption scandal. Erlich spent his entire career in the carpenter’s union, working his way up to top of the organisation until his recent retirement from it.

I have heard it from several developers, and we experienced it ourselves before presenting a case for a small development in front of the board recently. If you are proposing a new building, a carpenter union rep will call you and say something along the line of: “I saw that your case is about to go to the ZBA. I wanted to know what company you are planning to hire to do your carpentry”. In our case, they called my architect a couple of weeks before our hearing, and me (the developer) literally on the day before our ZBA hearing. In our brief conversation, the union rep spiel was filled with innuendos that made it quite clear that it could be really helpful to our ZBA hearing if we were to commit to hiring union for our project. I left it in the vague, saying that we were waiting to be approved by the ZBA before selecting our contractors. I can’t believe this stuff is still happening so openly shortly after the Boston Calling verdict.

At the hearing, unsurprisingly, a carpenter union rep was in the room and spoke in support of some of the projects, but not in our case. Rep Mark Erlich appeared lukewarm to our proposal. Without great community support, we would likely have been voted down.

On the other hand, nobody from the pot lobby business called to ask for our opinion before the hearing, and Bickerstaff makes the proper move of recusing himself when pot related issues come to the board. I conclude that the pot business is much more ethical than the unions in this town!

This is just how it works. If you want to build in Boston it better be union labor.

I worked on a project that proposed prefabricating units in a shop that was not in MA, and thus wouldn't use MA union labor. We were told by the BRA (before rebranding) that this was a non-starter, period, and it didn't matter that the developer was actively trying to reduce costs to make the units more accessible for lower income tenants.

If people want to know why housing is so expensive just look at the approvals process.

Prefabricating units would've provided huge savings that could be passed onto owners and renters, but nope not in Boston. Instead the development was built in a traditional way, and the units are only accessible to people making above average incomes.

Someone from the union called you and asked you to hire union labor. You said no thank you. The union rep said nothing about your project. You don't say that he voted against you, and your project received the requested variances. In fact I have to assume he voted for you or you would have included it in your evidence of corruption. How dare someone think that a list of people with proposed construction projects might create jobs for the union. How dare he offer to speak well of your project in exchange for getting his members work. How dare he represent that union support would be a positive for your project. Is everyone that doesn't support your project a crook?

Pathetic greedy koolaid drinkers like you are the reason that workers don't have rights in the US. There is nothing corrupt about wanting workers to be organized and represented. It is not illegal to support unions or base a decision on whether union labor is being hired. Since Massachusetts is a prevailing wage state, it doesn't change the cost of the labor. It just changes whether your workers have rights.

Ha ha, not sure if this is

Ha ha, not sure if this is trolling or sincere, but that's quite a tirade and I got a good chuckle out of it!

Developing technical skills, showing some passion and eagerness to learn about your trade, showing understanding and interest in a project, dependability, a modicum of social skills and respect toward others is how you get a well paid job in my world. That's what I try to do when I work for others, and it has served me quite well so far.

Calling people you know nothing about "Pathetic greedy koolaid drinkers" demonstrates quite the opposite. It will rarely help you or your friends score a desirable job.

if the shoe fits

Why do you presume that union members excludes high quality work?

Your tirade shows your bias. The union offered support that you weren't interested in. The so called corrupt union board member voted to approve your variance. You were outraged because he dared to call you and ask for work?

Your tirade was dishonent and pathetic. Why are you afraid of workers having rights?

what about City Councilors, Zoning Board and.BPDA memberswho are married to developers, real estate agents, contractors. The list is endless.

Would he apply the same standard to alcohol?

How many ZBA members have financial interests in establishments licensed to sell alcohol?

The ZBA is Corrupt

The ZBA rarely finds in favor of the residents of the neighborhoods, especially when it’s a big business that is making the proposal. Entire neighborhoods have come out against projects with valid reasons and the ZBA ignores them and approves. We need a city hall that looks out for the interests of the residents.

When any city agency with vast power, such as the ZBA and BPDA are effectively controlled by private concerns, then the just application of law is the property of those with position, power and wealth.

The rest of us are politely ignored societal dregs expected to kiss the rings of the mights but otherwise shut up, pay our taxes and show fealty to our betters through campaign contributions and correct votes.

Is our political world corrupt or just another human commodity bought and sold by those with the most wealth and power?

So now Marty wants to get all ethical. I'm remembering a few years back when Marty's old fiefdom, Building Pathways was the recipient of a multi million dollar federal grant. The program hadn't found employment for any of the trainees in years. In order to get the federal money a board had to be hastily convened since the program didn't have one. Darlene Lombos of Community Labor United got a bunch of suckers to sign on as board members. Anyone want to guess how many graduates of Building Pathways have gotten work in the building trades since then? Good luck getting an answer.

Move along folks, nothing to

Move along folks, nothing to see here.

Another city councilor looking at running for mayor
If mayoral election were held today, the results would mirror those of Walsh vs. Connolly, poll suggests
Boston cops friending some people on Snapchat and watching their videos for criminal activity; one man arrested that way charges they're only doing that with minorities
Fortunately for us, all that smoke is like five miles up in the sky
Boston to let restaurants keep patios open until at least Dec. 1 - and will waive fees for registering propane heaters
Michelle Wu makes it official, although Marty Walsh made it a bit anticlimactic