Boomerangs thrift store in West Roxbury to shut next month 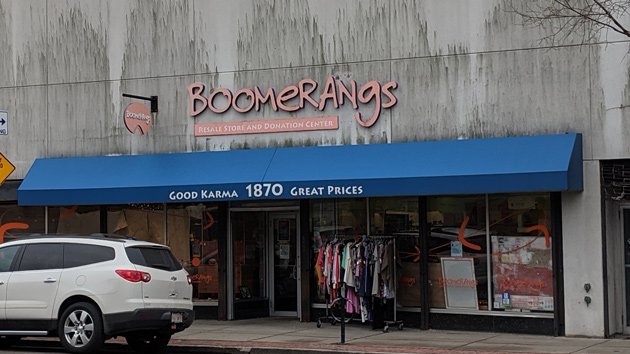 Boomerangs on Centre Street in West Roxbury will close permanently on March 21, a victim of struggling sales, according to a spokesman for Fenway Health, which oversees the AIDS Action Committee, to which the small Boomerangs chain's profits go. The other Boomerangs stores, in Jamaica Plain, the South End and Central Square, will remain open.

We are incredibly grateful to the wonderful staff at the West Roxbury Boomerangs store, and to the West Roxbury community, which welcomed us warmly when we opened in 2009. Unfortunately, that particular Boomerangs store has consistently struggled to maintain profitability, in contrast to our three other locations, which remain popular and profitable. All 14 of the store’s employees have been offered employment at one of our three other Boomerangs locations.

Over the next seven weeks, items at the West Roxbury store will be sold off at steep discounts in order to empty the store before closing. We encourage our customers to continue to visit us at our other Boomerangs locations in Jamaica Plain, the South End, and Central Square, Cambridge.

People jonesing for thrift shopping in the area will still have the Home for Little Wanderers Thrift Shop of Boston on Corinth Street in Roslindale Square, the recently opened Treasures on Washington Street, also in Roslindale Square and Urban Renewals, which recently moved from Allston to American Legion Highway in Roslindale. There is also a Savers on VFW Parkway and the Reliable Trading Post on Park Street. But none of these stores have monthly themed window displays, let alone auctions for the stuff in the windows.

I'm old enough to remember when the old Decelle's building was going to be converted into ground floor retail and residential units above but local Westie NIMBYs stopped it. The more things change there....

" Fenway Health, which oversees the AIDS Action Committee, to which the small Boomerangs chain's profits go"

Everyone has their hands in their pockets. Gotta keep the Executive Directors well paid.

I stopped going to and giving to the AIDS action committee for services when I realized their ED made over 500k and was crying how Baker cut her funding. Take a paycut lady and ditch the free kcup coffee in the lobby to continue to offer services.

Half of these ED's would never do their job if they made a less than 100k doing it. No way they'd be in the private sector. So do you really care about your cause or are you just collecting a paycheck.

Gay and HIV related charities are the worst. Look at their financials and you'll see they are not hurting for money at all. But those execs and board members get a nice big payout tho. I stopped supporting the HRC when I realized they were nothing but a LGBT lobby and PAC. I don't like PACs even if they are LGBT friendly. HRC floats on "human rights" but does little with the money they receive. Give to the ACLU if you want to give, they do something... often!

I am a huge Boomerangs supporter, both

as a buyer and donor: it's a great resource to have in my neighborhood.

But it's less edifying to hear the charitable component is so graft-y. I don't like supporting the Salvation Army so much these days; any suggestions for a place to donate to that isn't horrible either in its efficiency or its social values?

Absent that, I'm going to continue to support Boomerangs.

I can't speak to this non

I can't speak to this non-profit in particular — either on the salaries of people who work there or the work that they do, but assuming that executive leaders of NGOs should make under 100,000 isn't reasonable. You're not going to get a great leader that way, and just because your organization is mission-driven doesn't mean that you shouldn't make a salary that's commensurate with your experience. If that's the way that all non-profits worked they'd be far less effective...because they'd all be run by young people who would be willing to make less and there would likely be high turnover too. The organization would accomplish less and they'd bring in less $ for their programming.

The executive director of the

The executive director of the AIDS Action Committee received total compensation of $166K in 2018. Data for 2019 are not yet available, so how do you back up the claim that the ED makes over $500K? According to the organization’s most recent IRS filing (which includes audited financial statements and which are available to the public so there’s no need for your snarky demand to “see some financials”), more than 82% of their budget goes directly into client services and programs, with an administrative budget taking roughly 12% and fundraising at 5%. The Board members are entirely volunteers who receive zero compensation for their work. And do I detect some homophobia in your assertion that “Gay and HIV related charities are the worst”?

Calm down and get your facts straight.

You can do your homework looking through 990s here.

Yes, the executive director of Aids Action is listed as making >$500,000 per year (although the director listed is no longer employed by the organization, and was not a woman). Not sure if that salary was carried across to the acting CEO. But that is the CEO of Fenway Health, which is a slightly larger organization. The ED of Aids Action, which is related, makes $166k, which is a pretty reasonable salary for an organization in this region with a budget of $8 million per year. (At least at the time, the CEO of Fenway Health sat on the board of AAC, but wasn't paid fully by them or anything.)

Fenway Health has a budget of over $100 million, so the director compensation is less than 1 percent of the total budget, which is in line for organizations of this size.

Maybe you have some beef with the organization, but if so, you ought to cite actual 990s, and not just make up numbers.

Such an incredibly shortsighted and unnecessarily mean comment. I'm sure they're heartbroken you're taking away your support and entitlement, and good for you that you have the resources to pick and choose where you receive your services. Not everyone does.
As far as financials, they're readily available if you'd do just a bit of research, not by throwing a tantrum on a message board.
As far as Executive pay is concerned, the organization can not be sustained on the sale of 50¢ candle holders and $20 ottomans, but by partnering with corporate America and that's accomplished among peers, not some professed do-gooder with an axe to grind. With donors, a board of directors, as well as state and federal regulators, you'd better believe the ED is held accountable for revenue in, and revenue out, including salaries, all while leading a sizable company, albeit nonprofit, with thousands of moving parts and would probably be compensated much more for a comparable post in the for-profit world.
Do a little research before launching into your tunnel-vision disparaging remarks and taking your money elsewhere.
No one owes you anything, but thankfully the AAC and Fenway provide when no one else will.

This is unfortunate for West Roxbury.

Boomerangs does more than raise money for AIDS research. It provides clothing books household items etc for good prices and keeps stuff out of landfills.

They price items as if they were new.

Not at the South End shop, they don't. I'd say

most items are priced at about 20-40% of retail if they're in new or nearly-new condition, lower for harder-worn items.

Example: Brooks Bros regularly donates new men's dress shirts to the store (with the labels Sharpied out), retail price $98-$140, sold at Boomerangs for $28. Items that don't sell after a few weeks are often marked down another 50%.

I've gotten a lot of great deals there, and I also donate a ton of stuff to them.

This has the unintended consequence of my routinely spotting a piece on the rack and going, "Ooh, that's nice!" only to realize, "Wait, I donated that one a few weeks back, so I obviously wasn't wearing it."

I've never seen that at any of them and I've been able to pick up some quite nice brand-name items from multiple shops at a fraction of the price. Heck, I've seen stuff still in boxes or sealed selling for cheaper than the MSRP listed on their bar code.

This makes me very sad.

It's partially my fault

While I have donated goods to Boomerangs I don't believe I have ever bought anything there. Sad to see them go.

there is NOTHING in the way of thrift stores in the area, and plenty of boarded up storefronts to choose from....

This is a great idea.

This is a great idea.

Just because everyone in WRox has a car and loads up at Home Goods and Costco doesn't mean a 'Rangs in Dorch wouldn't have huge sales.

What we need is a good ol' recession

A good recession will help out Boomerang, and don't worry because with $1+ trillion fiscal deficit every year, it will be a good one. Boomerang will be booming again.

Stick around. History repeats itself.

In the early 80's when massive numbers of gay men were dying of GRID there was problem. If one person dies there are about 20 people who might want stuff. But when 20 people die and there is one left holding the bag...what happens. It starts out bringing it to a gay bar (Chaps) on a rack on a Sunday afternoon..there's so much of it you may as well....Same thing with the "Fenway Community Health Center ). One person, Sally Dean, rented a basement apartment on Haviland Street, furnished it with hospitals leftovers, and found doctor volunteers, it was like a deli counter. No billing, collections, appointment schedulers, etc. I remember delivering Larry Kessler's desk, (a former priest), a beat up old metal one to his tiny basement office with the peeling linoleum tiles. Just like James Michael Curley and his Boston City Hospital. His mother died because she couldn't get medical care. No one was ever turned away from BCH. People would fly in on planes with Boston City Hospital pinned to their clothes and cabbies would take them to the hospital. How times have changed.

you are way late to that party man....