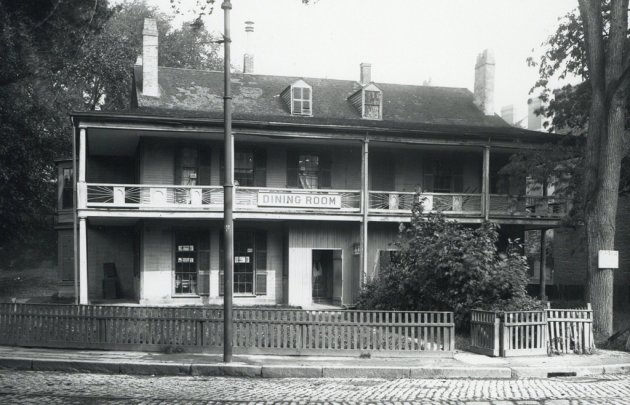 I don’t know where it is, but it does have that cool, southern style porch or like a western saloon

Southern details worth a second look

Down South this would be called a double gallery, colonial French provincial in Louisiana. The sloping roof shields the house from hot sun and heavy rain. And the long windows are for summer ventilation; tall windows would lose a lot of heat in a cold climate like Boston.

No idea, but I love the

No idea, but I love the balustrade on that second floor rail system!

Thanks for playing, folks! This shows the Thwing-Bartlett House at 1055 Washington St in Roxbury. The photo was taken in the 1890s

Are you sure about the number

1055 Washington Street is not in Roxbury. I was wondering if the street had been renumbered, or if Roxbury house numbers on Washington St. were different from Boston Proper in the 1890s but the 1880s and 1890s atlases seem to line up with the modern numbering, which puts 1055 Washington street about where modern Traveler street crosses Washington.
https://warnerresearch.quickbase.com/db/bktkup2zg?a=q&qid=15

This address can't be right!

1055 Washington Street was in the South End, just north of Dover Street (now East Berkeley Street). By the 1890s it was completely developed and there was nothing resembling this showing on the old atlases.

2055 Washington Street was just about where Melnea Cass Boulevard is today, at the Boston-Roxbury line, and it was similarly developed in this period.

I also checked 3055 Washington Street, just north of Egleston Square. Although it wasn't really developed at this time, there were no buildings like this at the area.

One possibility might be 1055 Washington Street in Dorchester, just north of Richmond Street in Lower Mills, and on the opposite side of the street. The old atlases do show some houses that looked like this in that era.

The Leventhal Map Center at BPL now has an online viewer where you can see the old urban real estate atlases superimposed over a modern map:
https://atlascope.leventhalmap.org

2501 Washington, on the 1890 atlas, shows a rambling structure owned in part by "H Bartlett heirs" -- which is not all that definitive since there were Bartletts all over Roxbury.. the same location on the 1873 map shows the address as 1055.

If you have any more info at all about the photo, I'd love to have it. I've written extensively about the Thwing Family and the Bartlett name is one of Roxbury's oldest, but I have never heard of this place. It doesn't show up in any of my old Roxbury reference books, either.

I’m guessing it’s no longer there

Or at least its porch hasn’t survived. Ramshackle and for sale, a colonial restaurant. I wonder what happened next?

Here's what happened next

A bunch of people complained at length about the loss of the neighborhood and about how the city had lost any semblance of culture and was now only a playpen for the well-off.

They must have gone on about how it would surely become a multifamily building built using pre-fab bricks and wouldn't fit in with the neighborhood at all. They concluded by yelling at the mayor who they claimed had sold out and was "forcing" the owner out.

Thanks to those of you who noticed the discrepancy with the street number. Upon further investigation, this is actually 2055 Washington, on the corner of Washington and Bartlett. (The label on the back of the photo was in error) Our atlases show that, as of 1889, the property with this building was owned by the "Heirs of Henry Bartlett"

Stil in a discrepancy

The Bartlett/Washington corner (where Gately's Cadillac Restoration is now) had a wood frame building that looks larger than this one but could be this if most of the building in the back was hidden. The rounded street corner in front is a good clue that this is really the right street corner. The wood frame building was on the 1873, 1884, and 1890 atlases but was gone in 1895. In fact, it appears that there is a for sale sign nailed to the tree in front of the building.

Interestingly, the building seems to have been owned by two different parties, John B. Kettell on the left and Henry Bartlett's heirs on the right. It's hard to say for certain looking at this photo that it was a side-by-side rowhouse but it seems plausible. That might explain why the dining room sign is on the JB Kettell side instead of centered on the balcony.

I love this stuff...

Standing there in 1890 looking at the building... What did it sound like being there? What did it smell like?

Smell?
Much less petroleum burning
Much more tobacco, horses, coal and/or wood-burning stoves/fireplaces/furnaces, maybe outhouses (had the sewer come through yet?).
More candles and kerosene, too. Maybe gas lamps?
Also within the realm of possibility that more people there back then as opposed to today had home vegetable gardens (so using manure) and/or kept a few chickens (so feathers).
Also - personal hygiene? Not that people are necessarily "cleaner" today, but so many today do daily showers as opposed to weekly bath night back then - I'd suspect that body odor (or the liberal use of perfumes to douse it) was probably a different situation then.

Reminds me of a Nursing Home

I don't think we had them in the 1890s. Was Washington Street a side street way back then? Called Moreland Street now in Lower Roxbury off of Warren Street?

Looking at the old atlases,

Looking at the old atlases, it looks like there was a BERY yard or car barn at Bartlett & Washington (to the left of the house in this photo).
I find myself wondering about the DINING ROOM. Neighborhood restaurants weren't quite the same thing ~125 years ago. Unless there was a hotel connected, I wonder if their customer base was primarily RR employees or area rooming house residents (getting room but not board).