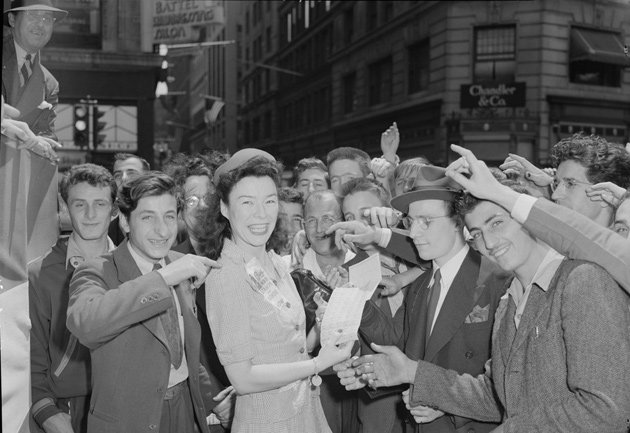 Digital Commonwealth is a great way to spend some major time - it has tens of thousands of photos from libraries and museums across the state. For some reason this morning, I decided to search on "crowd, which, among other things, led me to the BPL's Richard Merrill Collection - more than 5,000 photos taken of life in the Boston area in the 1930s.

Merrill was particularly interested in local radio stations, networks and personalities, such as Ruth Moss, who conducted some 10,000 interviews on the Yankee Network before leaving Boston to join the Marine Corps' Women's Reserve in 1943. But Merrill took photos of much larger crowds, too, such as this photo of a Greater Boston United War Fund rally at Boston Garden on Nov. 15, 1944: Among the performers that night: George Burns and Gracie Allen: In 1943, employees at the R.H. White department store (owned by Filene's but run separately) on Washington Street downtown held a party: Boston's cultural life continued even during the war. In June, 1942, Merrill chronicled a concert in Jordan Hall (notable to him because it was being broadcast over the then newfangled FM):

Not all gatherings in Boston were gigantic, of course, but many still would violate today's social-distancing norms. In 1941, Merrill captured a radio show at the Cocoanut Grove (which, yes, would have that fatal fire the next year): In December, 1943, Ella Fitzgerald visited Boston and gave an interview to WEEI:

Merrill photographed a lifeguard and admirers in South Boston before his appearance on a quiz show that pitted contestants from Boston and Providence against each other: In May, 1945, actor Cesar Romero, then serving in the Coast Guard, visited the Converse Rubber Co. (which had changed from sneakers to military footwear) in Malden: In June, 1943, a group called Youth on Parade celebrated its first anniversary by loading up a Swan Boat: Across Charles Street, meanwhile, the Army was demonstrating something at the Frog Pond: In the summer of 1941, an earnest gentlemen tried to inform some kids of the importance of defense savings stamps. The kids were residents of the Prendergast Preventorium, a facility in Mattapan for people with tuberculosis.

Roads bustled in Boston during and after the war, for example, Kenmore Square in 1946: James Michael Curley won the 1945 mayor's race and was inaugurated on Jan. 7, 1946, resuming the office he had last held 12 years earlier: Curley took the place of Maurice Tobin, who'd been elected governor in 1944. On election night, 1941, on his way to another victory as mayor, he spent some time getting the results at a local radio neetwork: Then, as now, death comes for us all, but back then, people could still gather to mourn - in this case for Cardinal O'Connell, at the Cathedral of the Holy Cross in the South End on April 28, 1944: Images from the BPL's Richard Merrill Collection used under this Creative Commons license.

Digital Commonwealth is an excellent resource.

Found it while searching for pictures of what Boston looked like decades ago. Highly recommended.

Thanks for the tip! I'll be headed over to Digital Commonwealth to pass the time.

Not Washington St, actually Tremont at West Street, opposite Common, the Chandler's store in pic is Emerson dorm today.

Was at a Summerthing concert in White Stadium in the 1970s. Graham Central Station was there. Parliament/Funkadelic was there. Our very own local groups were there and Richard Pryor cracked everybody up. I wonder if anyone has photos of that event. The stands were packed. The field was packed. It was like Boston's one day Woodstock.

Moreover, remember when people made an effort to look halfway decent before going out and about?

BPS has yet to make final decision on re-opening schools, but says parents can stick with remote learning
Wiseman's Next film: Boston City Hall
At least a dozen Boston-area restaurants now serve cocktails to go with takeout
It'll be wicked hot on Sunday and Monday
Boston wins state approval to get into the electricity business; will offer lower-carbon voltage to residents
BPS students could physically go to school a couple days a week this fall