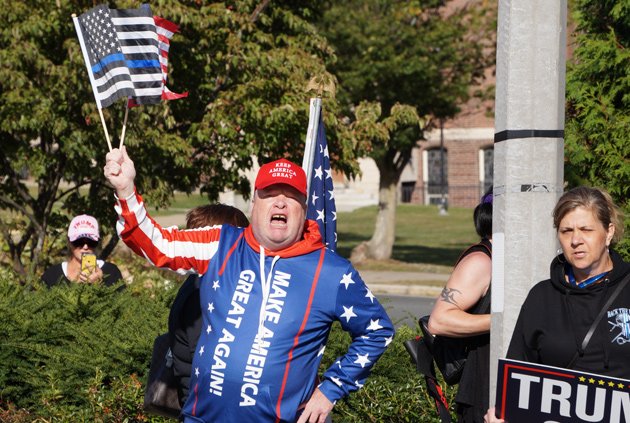 Both sides went megaphone to megaphone, blaring out taunts and insults, often from just a few feet away. At one point, the Trump organizer taunted a BLM supporter: "How much is George Soros paying you? How much is George Soros paying you?" The BLM supporter, equipped with his own bullhorn, led his side in several sing-song, schoolyard-like chants of "Dianna lost her job!" referring to the way she was stripped of a radio show she had for posting video of herself yelling insults at some landscapers speaking Spanish. "Go home, Karen!" was another chant.

The Trump supporters started in front of the E-5 police station, then were escorted by police across Centre Street to the Holy Name School wall, then to the island in the middle of the rotary, then back to the wall.

For most of the time, they were surrounded so well by the BLM supporters that people driving through the rotary probably did not see them and thought they were seeing a Black Lives Matter protest. Men driving alone in pickups seemed to delight in slowing down to yell "Fuck you!" and other epithets at the BLM supporters. One even managed to get his truck to spew thick black diesel smoke at a couple of BLM supporters after he first insulted them and they dared him to get out and tell them whatever he had said right to his face. Up to 20 BPD officers spent the time keeping the two groups separated by at least a couple of feet and helping direct traffic and pedestrians around the rotary as rush hour approached. At the designated 5 p.m. end of the Trump rally, police converged along the Holy Name wall to let the remaining Trump supporters leave without interference. Sergeant near wall points at officers near E-5 to go up to clear Holy Name School parking lot of protesters on both sides: Towards the end, BPD detectives came out from E-5 to do a little light videoing of the BLM demonstrators: The guy with the Trump signs later set several of them on fire: All of the BLM supporters wore masks. Most of the Trump supporters did not.

I didn't work today either

I watched an episode of Succession, then immersed myself in an entertaining day of high-stakes baseball.

Imagine finding neither of those things worth watching, and also having no other hobbies that you'd rather pursue than dressing like Lance Armstrong and yelling stupid (expletive) about people who are from other countries only because the concept of countries exists. What a sad man.

Also, not that I'm Johnny Bootlicker here, but I'd imagine that pigs could find a (expletive). We have them find truffles, don't we?

The Trumpers in West Roxbury may have been smaller in number but they were larger in weight.

We all know the racist/nimby

We all know the racist/nimby west Roxbury cops are voting for Trump.

Take this for what it's worth

I'm pretty well-sourced within E-5 and s/he says(in general) they're pretty tired of the tiresome sucking up the out-of-towner Trump supporters are doing. They (in general) get pissed off at the pig stuff from the BLM people, but (in general) respect their right to assemble.

to figure out what the dude in the last picture is trying to do. Set the signs on fire as a symbolic showing of... Trump setting the world on fire? The west coast wildfires? Proof you can bring a lighter to a protest without the cops beating you senseless as long as you’re a white guy?

I’m confused, but I’m sure John Costello will be along in due time to explain it with some folksy wisdom about WR cops and how they’re not quite like us.

The cops were remarkably even keeled

They separated the two sides, they helped people safely cross the street (no easy task at that rotary at the best of times) and they directed traffic. As the BLMers chanted stuff like "ACAB! All cops are bastards!" the police did, well, nothing, which is what you'd hope they would do.

As for the guy with the burning signs, I think he was just trying to show how he felt about Trump. The only real risk seemed to be to his own hands, with which he was holding the signs as they burned.

"for what it's worth." My impression is that as long as the BLM people stay reasonably civilized, the cops don't see any reason to interrupt them.

So we have Trump supporters

So we have racist Trump supporters on one side and people calling cops bastards on the other. Both groups are sounding more and more like two sides of the same coin.
As CNN put it so well last night, we have a hot mess, inside a dumpster fire, inside a train wreck.

from Merkin's comment, but CNN's Tapper was talking about the debate when he said that. Largely because of Trump's spoiled-brat behavior, of course.

Thanks for sharing your wig

Thanks for sharing your wig fetish with us today. Perv should change his handle to trichophilia.

You must be referring to the guy who spends $70K a year on his hair, hung out with Jeffery Epstein, and said he would "date" his teen daughter (and still grabs her ass in public).

Heh: the guy with the screen name Merkin

is accusing others of a wig fetish.

Do all Trumpies suffer from an irony deficiency? Or do they just learn to reflexively project their own deficiencies onto others from President Shouty McSpittlefleck?

fascists and people who are against fascists are never two sides of the same coin.

do not try to make the "both sides" argument.

Except nothing is more

Except nothing is more despicable than racism. So you can't equate both "sides" (saying a black life = a white life isn't a side).

Maybe if it was like the racists on one side and pedophiles on the other, you could say it's two sides of the same coin.

Google it if you don't get the reference: replace the **** with a very common swear word that begins with F.

It's something to do with an obscure comic strip, but the relevance to this thread would take more time than I want to spend digging out.

Somebody should tell the Trumpie who looks like a giant thumb

in a MAGA hat that his red-white-and-blue outfit is: a) disrespectful to the American flag; and b) not a flattering silhouette for him.

Another adjective for her- Qanon believer!

What I don't get about the Qoolaiders

They are claiming that a serial sexual predator is going to end all child sex trafficking while they disrupt actual efforts to do so.

Must be that "playing 5-dementia-nal chess" thing.

The pickup truck spewing black smoke is a “thing;” some of these bozos rig their trucks do they can cause that to happen and then go to events like this so they can gas the demonstrators. Some very fine people out there.

Wrecks their trucks, too

Not only is it illegal in MA to modify your vehicle like that, it also can result in a death spiral where the damaged diesel engine consumes all its oil as if it were fuel, and cannot be shut down until it seizes, breaks apart, or otherwise catastrophically fails.

You have to admit, "rolling coal"

is a genius way to own the libs who have the faggy idea that clean air is a good thing.

That's a really deranged way of thinking, so I don't have to admit that it's a good idea. I had one of those assholes try and choke me in NH some years ago. I had just bought a small Subaru, and he was apparently triggered by the sight of it. Fortunately, I had already figured out how to close the vents, and he was far enough ahead when I did that I didn't smell the least bit of his airborne excrement. I hope Swirly is right, and that he and all his kind damage their oversized piles of shit every time they pull that pinheaded stunt.

Right to public assembly and all that aside...

I'd love to know where all these people (both sides) came from. I suppose I could have parked and taken a look at the license plates parked around the area but then I'm no Lois Lane.

Even if they are Massholes

One of them at least is known to be from quite a distance away.

It's just a weird hot spot for opposing rallies

I get it when it's downtown and a big deal. I can't imagine driving to West Roxbury to shout at strangers.

Imagine driving to another state to protest stay at home orders during the height of local pandemic mayhem? They whine about local control and want dirt to vote but want to make up for any perceived deficiency in their worldview in places that have largely rejected it.

The whole "professional protester" thing is absolute projection by the right wing.

Dianna Ploss has planned a

Dianna Ploss has planned a ton of these rallies across eastern MA for the next week and is advertising them all over facebook and twitter. She livestreamed her obnoxiousness on Facebook yesterday and had at least 300 viewers when I looked at it against my better judgement. While Westie may have some MAGA's the district is solid blue.

is Holbrook resident Rod Webber. A complete moron who only shows up at these things so he can beg for donations from the suckers who think he matters.

What’s even funnier about the perpetually unemployed prankster is that he’ll go to a place like Mansfield and tell their cops they suck and are pigs, but won’t do it to the BPD. Mainly because they slapped the cuffs on him and he started screaming and falling to the ground like the coward he is.

Not everyone can troll Twitter all day while getting supported by a successful sibling.

oh cool i love his work with

oh cool i love his work with vermin supreme

4 USC § 8(g): The flag should never have placed upon it, nor on any part of it, nor attached to it any mark, insignia, letter, word, figure, design, picture, or drawing of any nature.

Complaining about other people not following rules while aggressively breaking any deemed inconvenient is very on-brand for Trumpdom.

Our flag shall not be used as sausage casing.

Porky McSlaphappy drop and give me 20 fatso.