After a one-year halt, Roslindale returns to its parade routes 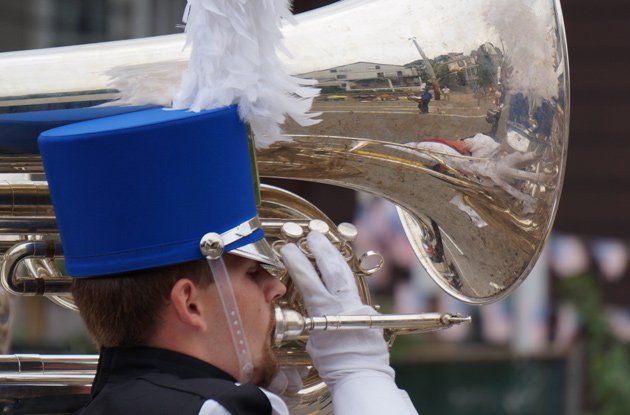 The rain held off for today's Roslindale Day Parade, the first since 2019, and held in honor of longtime parade organizer Tom Donahue, who died earlier this year. Kids from the St. Nectarios school: At least by Walworth Street, the crowds seemed larger than in recent years:

Roslindale "mayor" Vicky Elias of the Rialto Barber Shop waved to the crowds: Candidates for mayor of Boston and for city council walked down the route, but the day's most significant political news was probably that supporters of incumbent at-large Councilor Michael Flaherty this year gave out not only Flaherty emery boards, but candy: Essaibi George had way more big rigs supporting her than Wu (who had none); possibly even outnumbering the Shriners with their miniature trucks: John White, who is running for the District 5 (Roslindale, Hyde Park, Mattapan) council seat walked with supporters. Incumbent Ricardo Arroyo walked with the Wu contingent for part of the parade and with the folks supporting David Halbert for an at-large seat for another part. Both Kendra Hicks and Mary Tamer, running for the District 6 (Jamaica Plain, West Roxbury, Mission Hill and a bit of Roslindale) seat Matt O'Malley is giving up, walked: Erin Murphy, running for one of the four at-large seats, had a fuzzy supporter. Murphy was also the only candidate who gave out candy by herself, rather than delegating that entirely to volunteers: There was only one marching band, but it was a big one: A combined effort of Quincy and North Quincy high schools: Cars of both past and future slowly moved down Belgrade: Mary Tamer did not hand out

Mary Tamer did not hand out candy herself, but she did hand out dog treats herself (see photo)

Ah, that's what that bag was!

I thought it was an opened bag of Dunkin' Donuts coffee grounds, but dog treats makes more sense.

Arroyo was there he just didn

Arroyo was there he just didn't have a designated parade position

Story corrected - he walked with the Wu group.

It makes is seem like he's ignoring his own city council race. His dad once did that. In the short term, it went bad for him.

I always keep an eye on who is walking in the parade and who isn't. Heck, Mejia got my vote at the parade back in 2019. And as we all know, it was my vote that won it for her.

To be honest, Arroyo kind of

To be honest, Arroyo kind of can afford to forego it considering who his opponent is and how things are looking.

Tell us more about this!

To be fair to anon (and Arroyo)

I guess as long as baby Arroyo didn’t head to Venezuela this year, we’ll say he’s taking the race seriously.

Nice coverage of the parade, Adam!

Kind of crappy putting out an

Kind of crappy putting out an article and pics covering *some* candidates. No mention of Bridget Nee-Walsh who also walked in the parade and handed out candy and lit with a group of volunteers.

Speaking of, AEG is really good at inadvertently putting Wu in a good light. Wu marches down the street with a group of people. Immediately after, AEG stinks up the joint with a bunch of big ugly trucks.

Had twice as many people WALKING with her. Also it’s a parade, calm down.

You must really hate the Shriners then

They had trucks, cars, motorcycles, motorized big wheels, and little tiny versions of most of those things.

Shiners were smelly too. And holy mother were there a lot of those old dudes.

Yeah, there were a lot of people in those loud punk shirts. Diverse, too, so not just Westie whites. But… I for every loud pink shirt and loud pink sign there are five Wu voters.

If you see the person making a stink (no pun) in favor of a carbon-neutral parade next year, it might be me.

I’ve never seen so much heavy artillery turning out for a candidate as Essaibi George showed off in the Rozzie parade. But judging from the crowd reaction around me, the Wu train was holding its own among people who, you know, vote.

Roslindale is basically Wu's home base.

And by that you mean

She lives a short walk from the parade route.

Why she lives in a completely different congressional district than the parade route!

I’ve got to figure out a running route starting from my house that hits 3 districts.

I had an ad cover each of the photos of the Roslindale day parade. It ruined looking at them for me. Great photos though and it made me miss my old Neighborhood.

I thought I had made those go away, but they're obviously back, so I'll try to work with my ad providers again to stop them permanently.

Still there on Tuesday Morning!

I did find, though, that if I scrolled quickly enough to not focus on any picture, I could get past before the ad covered over it.