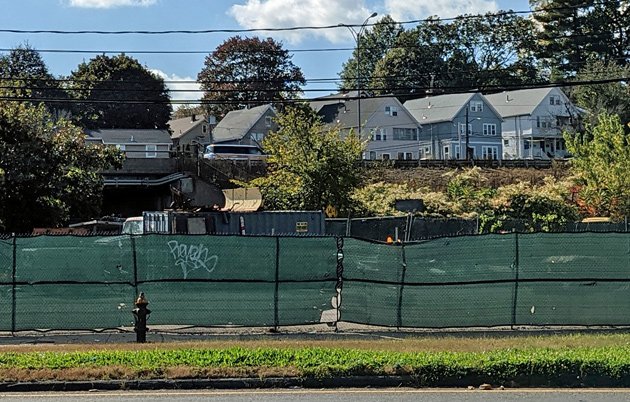 Part of current lot at corner of Parsons and North Beacon/Birmingham Parkway, across from the IHOP.

A resident of Parsons Street in Brighton is raising funds on GoFundMe to pay for a lawsuit against the Zoning Board of Appeal and the owner of a parking lot at 372 North Beacon St., who wants to lease the space to a tow-lot operator being forced out of Emery Road in Allston.

In the lawsuit, filed in Suffolk Superior Court, Charles McGilvray of Parsons Street, charges that while the towing company seeking to rent the space says it will try to avoid Parsons Street, it likely will use it exclusively because commercial traffic is, at least technically, illegal on all the other routes to the lot, which are DCR parkways which trucks are supposed to avoid. McGilvray is the closest resident to the site, separated by the turnpike and the Worcester Line train tracks.

McGilvrary also charges that the zoning board illegally granted variances to 372 North Beacon St. owner - and Lexington state Rep. - Michelle Ciccuolo to put up a tall fence at the already dangerous corner of Parsons and North Beacon streets, because there is nothing unique about the parcel to cause the sort of hardship variances require.

The zoning board approved Cicuolo's plans in May, subject to a BPDA review of "screening and buffering" to replace the current tattered green gauze that covers a chain link fence around the lot. The proposal called for ten-foot-high fences on the corner lot. The approval also requires Ciccuolo to work with BTD to determine the actual number of cars the lot can hold; in a message to the board, BTD said it was not sure the lot could hold the 69 cars, Ciccuolo proposed.

Ciccuolo wants to rent the lot to D&G Towing, which provides towing and impoundment for cars cited by Boston Police for parking violations in general and by BTD on street-sweeping days in Allston and Brighton. The company's current lot on Emery Street is giving way to a 39-unit residential building as part of that area's relentless transformation from industrial to residential.

Two members - Chairwoman Christine Araujo and Eric Robinson - voted against the proposal. Robinson did not give his reasons, but Araujo said was unhappy that a business that is allowed in what had been an out-of-the-way industrial zone on Emery Street would be moving to a far more visible prominent location at the edge of a residential zone within sight of the Charles River. "This is just, you know, somewhat backwards," she said.

Although the mayor's office supported the proposal, City Councilor Liz Breadon (Allston/Brighton) opposed it, citing poor maneuverability on the site and the fact that the intersection is already dangerous for pedestrians and bicyclists, whose numbers could grow after DCR re-opens a pool nearby and works to make the roads around the parkways that join on the other side of Parsons Street safer for people on foot or two wheels. She also said it would be likely that the tow trucks would likely be hauling their loads down the already busy Parsons Street.

In its formal written decision, not issued until July, the board wrote that the lot, which had previously been used to park construction vehicles for state projects nearby, was appropriate for parking and that "the exceptional narrowness, shallowness or the shape of the lot, or exceptional topographic conditions thereof" let the board issue the required variances because otherwise the lot owner would suffer "demonstrable and substantial hardship."

In addition to his other arguments, McGilvray also contests the permission to simply use the lot for impoundment. Parking lots in that area are allowed, if the zoning board agrees, but McGilvray says the last time the space has been used as a legal parking lot was when a pizza place there burned down in 1974. An impoundment lot is just not the same as a regular parking lot, because it means "a large volume of tow trucks" heading to and from it.

Given the poor maneuverability on the site and the need to use Parsons Street, he continues, that would mean tow trucks lining up onto the residential stretch of Parsons just to deliver their cars.

Watch the ZBA hearing on the proposal:

Araujo said was unhappy that a business that is allowed in what had been an out-of-the-way industrial zone on Emery Street would be moving to a far more visible prominent location at the edge of a residential zone within sight of the Charles River.

Emery Street is so "out-of-the-way" that it happens to be a two-minute walk from two high-frequency bus routes, a dozen restaurants, an elementary school, and a five minute walk from the new Commuter Rail station. We should be building at least 39 homes for people there.

The site on Parson's Street is 300 feet from the nearest house. It's on the edge of a residential zone but just happens to be separated by an eight-lane highway and two railroad tracks. It's hemmed in by the Turnpike embankment and two DCR roadways, and if there were a good place for a tow lot, then this is probably it. If you crane your neck, you can see the Charles (maybe, if the leaves are off the trees). You can also see the Turnpike, a moving company, and an IHOP (probably a historic IHOP).

If tow trucks are such a concern, maybe the tow company can strike up a deal with DCR to use Birmingham Parkway, perhaps even integrating it into the planning process for that stretch of roadway. In fact, the future configuration of the roadway there may make North Beacon Street a feasible alternative route, because going from North Beacon to Parsons will no longer require an advanced degree in Boston Driving to figure out, nor will it require traversing DCR roadways (although the current route around the rotary there stays on North Beacon Street, which is Route 20, which is not a "pleasure vehicles only" roadway, and also, when was the last time MSP ticketed a commercial vehicle on Soldiers Field Road or Storrow Drive that didn't hit a bridge?).

Anyway, this is NIMBYism for the sake of NIMBYism. It's a microcosm of the reason we don't have enough new housing: we have to have an internecine argument about a tow lot on a property next to a highway which has been vacant for 48 years (the property, alas, not the highway).

the Brighton side of AB

Doesn't really care about Allston. It's where they shop (reason why the go nuts over parking changes there) but anything that is near them is a scandal, no matter the benefit to anyone else (including them). That lot is butt up against the Turnpike embankment and had heavy trucks going in and out when it was used to store construction vehicles. That area is so unfriendly to pedestrians so that's not a real concern. Also, if the local roads around there aren't meant for trucks, how do all those semi tractor trailers get to the motel next to IHOP. How do those cars get delivered to the car dealership further up the road? Their might be restrictions on the DCR roads but if those vehicles are allowed, tow trucks are a breeze.

Wait, what? Just because you

Wait, what? Just because you don't like people opposed to residential density means anyone opposed to the location of a tow lot is also a NIMBY?

And anything goes if you're near the Mass Pike anyway?

It's a riverfront parkway. A tow lot is one of the more noxious land uses out there: small diesel engines coming, going, idling, hydraulic-lifting, and backup-beeping 24 hours a day. If zoning isn't here to protect us from that, what is it for?

And why does it matter that the large industrial area which is the former location is near two frequent bus lines? How does that make the proposed location any less of a problem?

If you care so much about housing, shouldn't you be advocating for housing on this lot?

I don’t think trucks are

I don’t think trucks are banned from North Beacon Street. There aren’t any signs saying so. Plus it’s a numbered highway.

It’s a bit surprising that they couldn’t verify this basic fact before basing a lawsuit on it.

However, I certainly don’t think a tow lot deserves special permission to operate in a prime location in what really should be part of the riverfront parkland.

Side note: the property lines

Side note: the property lines look like there used to be a rail line between this property and Roy’s Moving.

Fuck this tow lot. My one

Fuck this tow lot. My one interaction with them was when I lived in Brighton and got towed out of an off street parking spot that I paid $200 a month to park in. When I told them that and physically showed them the parking pass in my car, they said they'd let me take my car for $80 instead of $120.

Smash and crash jams up Cleveland Circle
Whoa, cool your jets there, pizza man, you can't just roll into the City that Always Sleeps and start serving late-night pies
Southern bird comes up for visit
With Covid-19 rates going up again, Boston urges, but doesn't require, a return to masks
41-unit apartment complex proposed for Comm. Ave. hillock in Brighton
Teen charged with shooting at Fidelis Way development in Brighton two weeks ago