Police say Cambridge dognapper returns to the scene of the crime, where he is promptly arrested thanks to an alert TV reporter 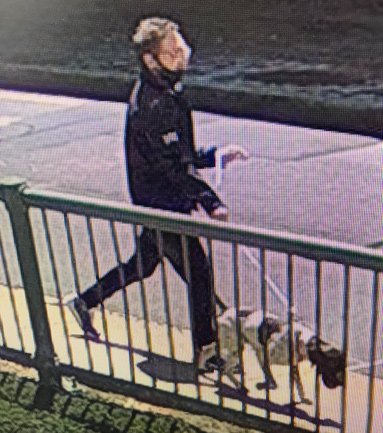 Cambridge Police are crediting a Channel 7 reporter for the safe return of Titus the Pointer - and the arrest of his alleged dognapper - today, after the guy decided to go walkies with the dog right past the parking lot where he'd allegedly taken him yesterday, and where the reporter was getting ready to do a report on the case.

This morning, Cambridge Police reported the dognapping of Titus, a 13-month-old white German short-haired pointer, out of a car in the parking lot at 620 Memorial Dr., by a man who then walked the dog across the BU Bridge into Boston.

No reporter worth their salt could pass up a man-steals-dog story like this, so WHDH's Juliana Mazza rushed to the scene for a standup. While there, police say, Kyle Gariepy, 29, wandered by, walking a dog that looked just like Titus.

WHAT ARE THE ODDS?!
My photog John & I were covering a stolen dog story in Cambridge when all of a sudden we spot THE DOG!!! We were able to convince the suspect to give us the pup & kept him engaged until @CambridgePolice arrived shortly after. We are SO HAPPY Titus is safe! https://t.co/FPg2Pfsqc2 pic.twitter.com/s1ESKLiqIb

Arriving officers arrested Gariepy and briefly took possession of Titus before returning the pet to his owner - in good condition, police say.

Gariepy now faces charges of larceny over $1,200 and breaking and entering a motor vehicle with intent to commit a felony, police say.

A better photo of Titus, via Cambridge Police: That dog's not white

I suppose it doesn't matter, given that there are photos, but still....

give you the inside scoop?

You are not good at this.

How exactly? What makes you say that? Do you use Photoshop? I'm guessing no.

If anything, it could use some adjustment to bring out the pup's face.

Glad he's back with his owners.

Doesn't look photoshopped to me...

give it a rest

It wasn't funny or insightful the first time you said it

why you should keep your children in hand at all times too right? Don't get them off the lease or its your fault right? Stupid AHOLE

In a sense, yes

If someone left a three year old kid in the back seat of their car while they were running errands, even though the person who breaks the window and kidnaps the kid would be criminally responsible and should see decent jail time, that wouldn’t mean that the parent would be without blame. Heck, DCF would probably pay the parents a visit quite quickly.

That said, keep your dog on a leash in public areas and don’t let your three year old run through a store unattended. And don’t leave either sitting in a car unattended for long periods.

This is a bit weird

Why would he come back? If he was a thief he should the owners to recognize their dog.

Once i found a dog on the street on my way to work. I almost took it with me, because I didn't have time to knock on doors. But I would have come back after work. I'm glad I heard the owner whistling.

I feel like the thief has some weird story about this.

That dognapper is a combination of a first-class asshole and a dumb-assed criminal!

says he ain't right in the' haid and just thought the dog wanted a walk, and was going to put it back.

And if you're going somewhere where dogs aren't welcome, then leave Fido at home.

But what if someone breaks into your home

and steals your dog?

No, you should bring your dog with you everywhere. Anything else is irresponsible. Thieves!

So, we're out for the day, hike for a few hours with Fido, and stop at a brewery for some chow and a brew. Car in the shade, windows down, mildly warm out, Fido is exhausted, he's very content to snooze in the car.

This is a bad thing? We're irresponsible owners? Really?

I have done this. There are places where a bystander can break a car window to save your dog and not be blamed. So it makes for misunderstandings.

The victim is the dog left in

The victim is the dog left in the vehicle, not the person who left him there. He was the one dognapped.

That being said, the way the dog is left in a car - windows down and for a short period of time compared to a hot day with no ventilation.
Some dogs love going out for errands and a few moments alone in a cool, ventilated vehicle are worth it if they get to ride around and stick their head out of the window (source on this is me and how I’ve interpreted my dog’s enthusiastic reaction to going for a ride).

Titus is safe, the guy is charged, thanks to a Channel 7 reporter.

Kudos to the Channel 7 reporter:

Kudos to the Channel 7 reporter for saving the dog's life, and the owner a lot of heartache.

Are we talking about the dog? How much does a dog cost these days?!?

From free, to a few hundred for a rescue, to a thousand, to thousands from a breeder.

On behalf of dog lovers everywhere thank you Juliana

Oh man, the reunion was extra

Oh man, the reunion was extra special. Titus was all waggy and licky when he got back with his owner.

It seemed like the guy who took the dog wasn't quite all there. I can't tell if he thought he was doing a good thing or if he knew that he had stolen someone else's dog. Very strange.

In other Cambridge news

Three sought for robbery, gun display in Cambridge
Rats running roughshod: Cambridge looks to hire a rat liaison
You can take the boy out of Cambridge, but ...
Was a good day for a parade
On a day of helicopters, one is just hovering over Cambridge, being annoying
Man jumps from Mass. Ave. Bridge, but is rescued