Shortly before 1 p.m, State Police reported somebody drove an "overheight" truck right into the bottom of a bridge on the outbound side. No injuries, but the right travel lane had to be shut while the remains of the truck were extracted. WCVB has more.

Earlier:
Somebody with a better calendar. 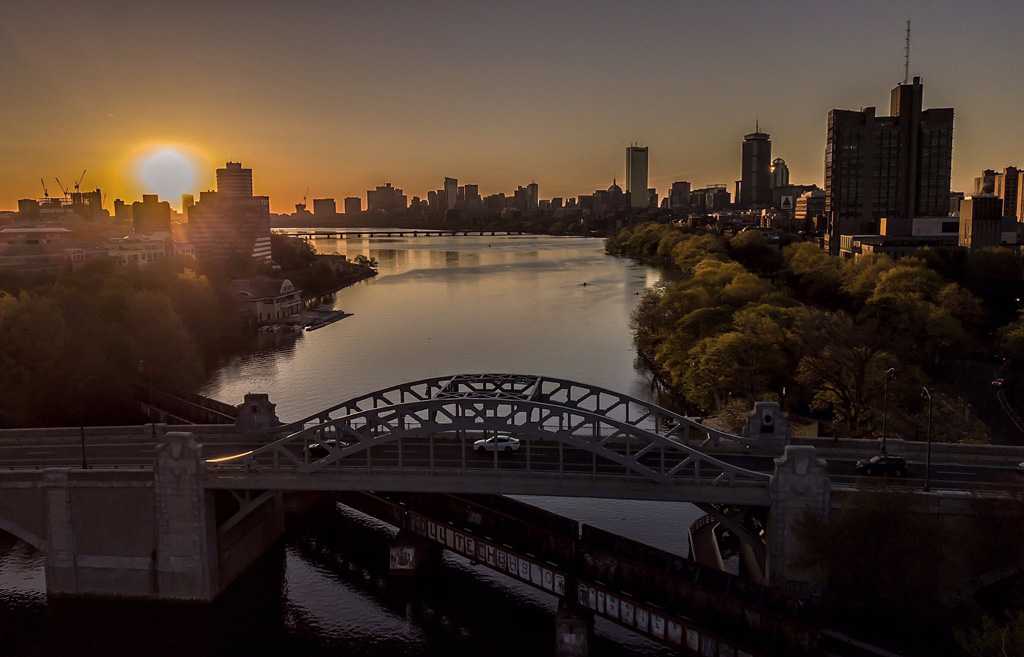 Rick Macomber watched a new day dawning over the Charles River and the BU Bridge this morning.

See the latest from the Comm. Ave. bridge hellmouth

BU has a Webcam pointed right at the bridge. It's not a livestream, but it's frequently updated. 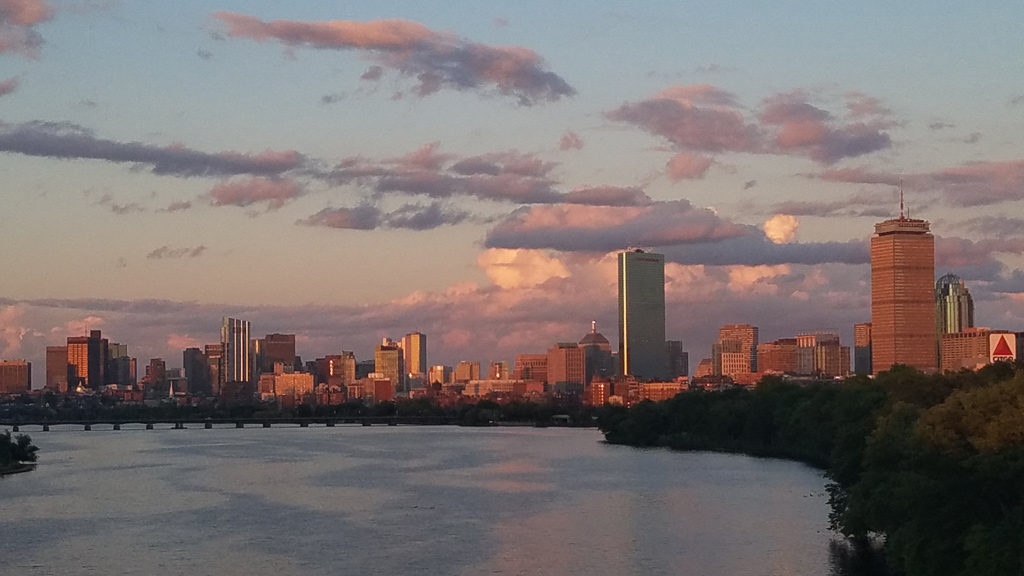 Petra A. took in the sunset from the BU Bridge this evening.

They're red in all directions, Margo Romanowski reports. 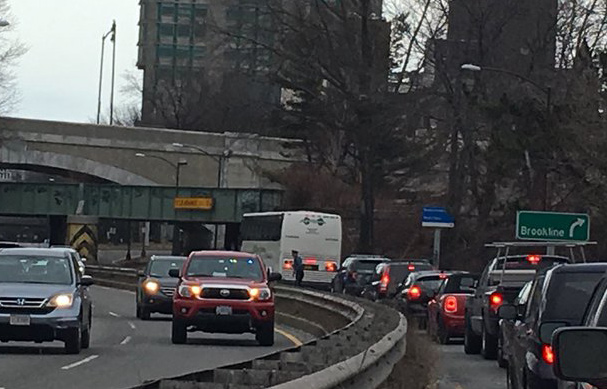 Or is that side of the BU Bridge still technically Soldiers Field Road? In any case, if he has any passengers, they're probably relieved he had good enough reflexes to stop before plowing into the lower train bridge there.

Todd Cosentino reports one of the advantages of early-morning bike commuting is the view from the BU Bridge. Read more.

Boston firefighters are at the Comm Ave. bridge inbound over the turnpike and the Worcester Line train tracks, where some large steel plates over a construction zone have settled too much, leading to concern they might give way. MassDOT engineers have been requested to the scene.

See how Comm. Ave. near the BU Bridge is doing

Boston University, which has a campus split by the infamously decaying span, has hired a company that sets up cameras to record construction jobs to time-lapse the heck out of the bridge now that the state has begun to replace it (how is the shrunken turnpike under the bridge doing?). 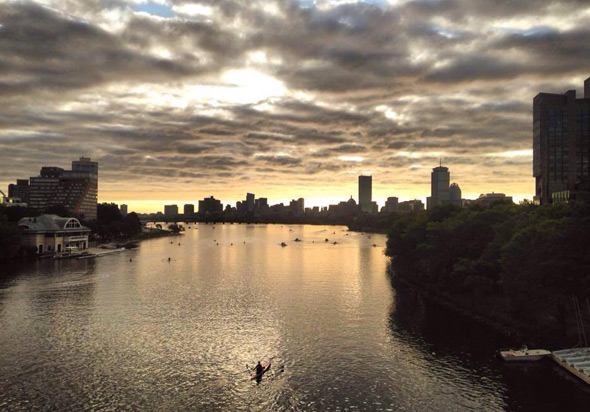 Luisa LaSalle watched the sun come up over the Charles from the BU Bridge this morning. 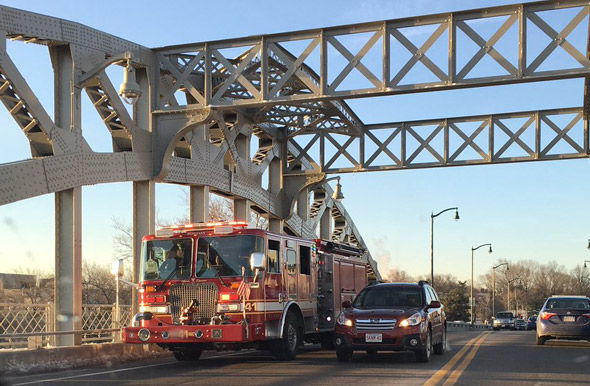 Alive, around 7 a.m., according to Northeast Fire Alert. 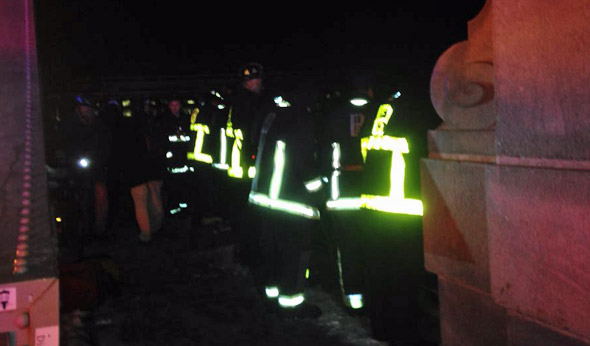 First responders on the BU Bridge. Photo by Greg Hum.

UPDATE, 7 p.m. A thermal scanner mounted on a State Police helicopter found no evidence of a body; firefighters began packing up to leave.

Around 6:15 p.m., based on a phone call. Police and firefighters from both Boston and Cambridge are on scene and searching the Charles River.

Free-helmet day at the BU Bridge 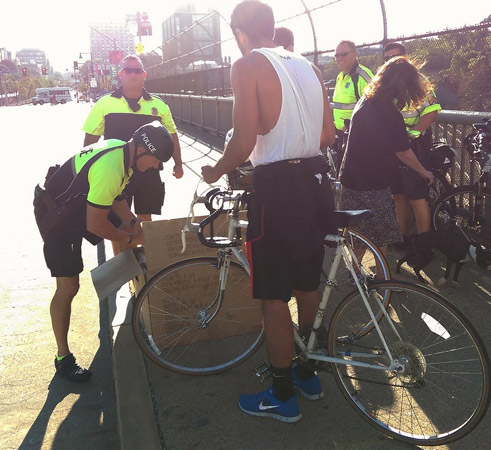 Turlach MacDonagh reports police were giving out free helmets to bicyclists without them this morning on Comm. Ave. at the BU Bridge.

The deal with this pink thing on the BU Bridge

Found this object epoxied to the BU bridge. Assume it is a public art kind of thing. Wondering if anyone know what the deal is?

Probably few worse places for traffic lights to go out than Comm. Ave. at the BU Bridge 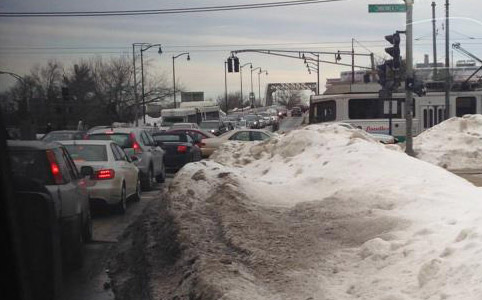 Jonathan Levitt give us a taste of the chaos around 9 when the lights went out on Comm. Ave. by the bridge. 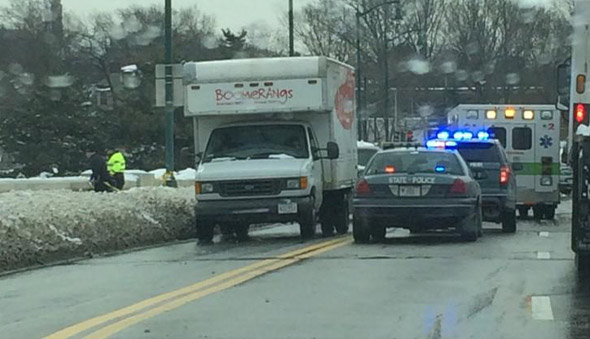 The 22-year-old woman suffered serious injuries. She was conscious and alert when transported to Brigham and Women's Hospital.

Whether the fall was accidental or intentional remains part of an ongoing State Police investigation.

Ari Ofsevit enjoyed the view of the fog from the BU Bridge this morning.

Large numbers of BPD officers descended on the Esplanade and the BU Bridge shortly after 4 p.m., when a 911 caller reported a man in camouflage running around near the bridge with a rifle. Cambridge Police sent some officers to their side of the bridge as well.

In fact, it turned out there was a whole troop of men running around the Esplanade with rifles - but they turned out to be BU ROTC cadets doing some training with fake rifles.