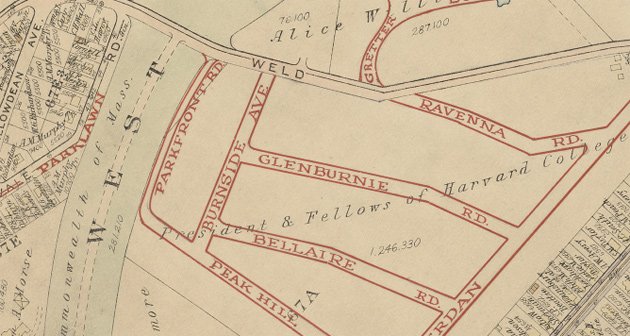 WCVB reports that residents who have always thought they lived on West Roxbury Parkway near Weld Street woke up this week to find new city street signs IDing their street, a private way, as Park Front Road and now they're having trouble getting deliveries, so they've resorted to putting up paper signs reading "West Roxbury Parkway."

S4syth, who found a 1924 map of the nascent road, wonders if this is a result of one of those inscrutable Boston/DCR things, because while West Roxbury Parkway itself, the one that most people know, is a DCR road, everything parallel to it is a city road.

He notes that the Boston Street Book, the city's official listing of every road, lists it as Park Front Road.

However, neither the city assessing department nor the Suffolk County Registry of Deeds lists the road in their records.

According to the Leventhal Map Center's Atlascope, which lets you call up a modern location and browse through old maps, the road was laid out sometime between 1915 and 1924, on land that was originally owned by Harvard.

How can we miss you

If you don't go away?

It looks like the neighbors have been taking care of that [dirt] road themselves without any assistance from the city, so it should come to no surprise to them that they didn't live on the parkway itself, private road or not.

Which begs the question: who owns the road? Well that would be the abutters and they've known all along what was what and who lived where, unless none of the folks who lived there has never seen a deed for their property. And in regards to the city services and utility companies and the post office for that matter know who's who and what's where on that street.

Sounds to me like some folks over there were having fun playing make-believe addresses and now it's over.

Even if the city names the

They're not "make believe addresses" unless the USPS changes them. The city also assigns addresses to parcels, but the USPS has more authority so the city's addresses tend to only be used internally.

Wrong, wrong, wrong. The City's engineering department assigns addresses. When a building is developed, the developer petitions the city engineer for an address that is then assigned. The City Engineer then notifies all departments (assessing, IT, Fire, Police, DPW, as well as outside agencies such as USPS, MWRA, Gas/Electric etc., of changes/new addresses.

For new construction, that

For new construction, that process may be followed. But these are 100 year old parcels. Whatever the USPS Address Management office says is the address, is the de facto address, regardless of what address gets tagged inside City Hall.

The discrepancies between city addresses and USPS addresses are most common buildings where the the mailbox ended up on a different side from where the city thought the front door would go.

When the USPS is gone in 50

When the USPS is gone in 50 years, who will we say then assigns addresses? Amazon? Verizon? No. The municipal or town government assigns and is responsible for street names and addresses. Not a federal agency. USPS has their system (zip codes) for delivering mail, that's all it is.

Looking at the parcel map...

On the Massachusetts parcel map the road is considered owned by the "Commwlth of Mass" as part of the same parcel as the parkway, (whereas most roads are not part of any parcel, or in this particular area say "Boston" without any property value assigned) but I don't know how official this particular dataset is and obviously there may have been several layers of jurisdictional dispute going on where even if they "own" it other layers of authority might be assigned to other agencies.

It's amazing this hasn't come up in title searches during home purchases for this street.

It would be ignored during

It would be ignored during title searches and home purchases because the identity of a property (for ownership purposes) is not the mailing address and not the street address. It's the parcel, plat, book, and page.

This incident was not over the street having two names, but over the city changing the street sign all of a sudden.

There just weren't any street signs for Park Front Rd to begin with. If you look at images captured of the area, the street was an unmarked dirt road parallel to West Roxbury Pkwy, so people (including USPS) just assumed those houses were on West Roxbury Pkwy.

It looks like that street has been Park Front Rd ever since it was originally laid out.

Welp, if you're going to snoop around like that then you can check out the city's assessor's database and even they have the properties on Park Front Road listed as being on W Roxbury Parkway with the correct street number but across the parkway it's Parklawn Road.

So no doubt to the confusion, it's the city's fault and I was wrong. Being wrong is fun sometimes.

The neighbors should put up their own signage, private street y'all, and have their Amazon shopping delivered correctly. If the city isn't going to maintain the street to modern standards then they should relax with the street signs until they're ready to develop a solution that works for all parties instead of hamfisting it like they are known to do.

If you look at the City of Boston Assessing map (http://app01.cityofboston.gov/parcelviewer/), it lists the street as Parkfront Rd (looks like 1 word).

HOWEVER, when you click on a particular parcel, the details indicate the street address as W. Roxbury PW. (here's an example: 368 w roxbury pw)

The departments don't talk to each other.

ISD has changed my address three times in 15 years. All slight variations (8 to 8a) but none of the changes are anything close to what the post office uses. But this is generally not an issue unless I need a building permit. But it does feel very random.

Your Sims are upset

This feels like something out Office Space. Someone "fixed" the glitch and the fallout is everyone else's problem.

For our next trick, we shall

For our next trick, we shall rename the entire neighborhood without consent. Welcome to North Dedham!