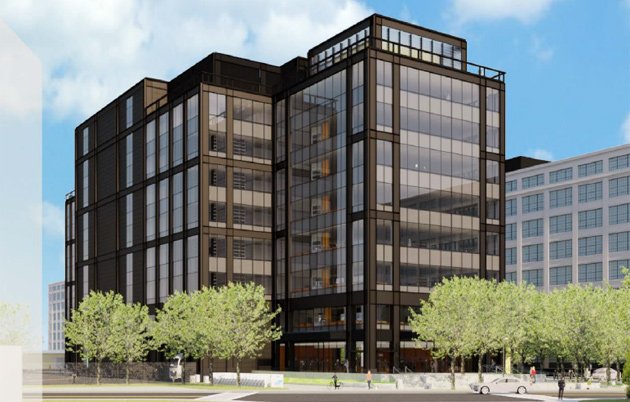 Cronin Development has filed plans with the BPDA for an eight-story building on Drydock Avenue at Tide Street in the Raymond Flynn Marine Park that would feature the seemingly now obligatory life-sciences R&D space as well as space for an actual marine-industrial concern - Boston Ship Repair, which runs the large drydock that gave Drydock Avenue its name.

In its filing, Cronin said it is working with the Convention Center Authority, which already runs a convention center/Seaport shuttle, to create a new line to and from Nubian Square.

The first floor of the proposed building would include offices for Boston Ship Repair, as well as a lunch counter and some life-sciences lab space.

Floors 2 through 8 will be designed for life science lab tenants who will typically occupy 60% of the floor area for lab functions and 40% for office support functions.

To make way for the building, Cronin would raze the brick building now on the site, at 24 Drydock Ave.

Cronin says it would buy three 20-seat minibuses for the Nubian Square bus service. The buses would run every 10 to 15 minutes during workday rush hours and every 25 to 35 minutes at other times on work days.

This link, which would make constructive use of the underutilized Bypass Road and the Haul Road, will literally bridge the opportunity gap that currently exists between the Seaport and the neighborhoods where opportunity is needed.

Cronin says the bus route is part of its commitment to "promote equity and social inclusion." In addition to the new bus service, Cronin has agreements with three non-profit groups - English for the New Bostonians, Save the Harbor/Save the Bay and Ron Burton Training Village - to provide workforce-development programs in the building.

Because the site is on a small peninsula, Cronin says it is mindful of the need to deal with flooding:

The project has been designed to meet the City of Boston 2070 projected sea level rise of 40 inches. Building utilities will be located above grade to protect against sea level rise and provide additional layers of resiliency ensuring the longevity and performance of the building into the future. The building is designed to accommodate a temporary flood barrier system to provide continuous protection at the building perimeter during a flood event. The first-floor elevation has been raised four feet to meet the projected sea level rise and accommodate a higher roadway elevation in the event the City raises the streets in the future. Interior finish materials at ground level and landscape materials are intended to be flood resistant.

The building would have no parking spaces, but Cronin says it expects to sign a contract with the BPDA subsidiary that runs the marine industrial park for paces in an existing garage on Northern Avenue.

The proposed Project design responds to its unique context with a building that creates a decisive architectural and urban design statement. It will be eight stories high plus a mechanical penthouse and it will feature a boldly expressed framework and a façade with modulated areas of glass. The building’s massing is composed of two rectangular elements that fill the site’s irregular shape.

Does the MBTA allow shuttle buses to use their terminals? They don't allow BPS buses to drop off kids inside stations.

I was going to suggest a designation of CT-3-EX (for "extended"), but it diverges from CT-3 much further back.
How about 66-S (for "Seaport")?

When the area was dedicated in honor of Ray Flynn the name was altered. The word INDUSTRIAL was omitted. Now the BPDA can do an end around on businesses that are related to marine industrial uses.
This is an example of it.

Dunno how I've been missing that all these years, but, yeah, no more "Industrial" in the name of the "industrial park."

rather than follow the process to amend the Zoning Code, they simply change the City by fiat.

I’m all for honoring Ray

I’m all for honoring Ray Flynn, but it seems silly that they named the Marine Park and the bridge over the Reserved Channel and the Cruiseport for him. Pick one!

Wasn't this the promise of

Wasn't this the promise of the silver bus when it was downgraded from being a light rail line like Brookline and Newton have to a bus? A one seat ride from Nubian sq to the airport and seaport. Still waiting for that,entrance the state should work to make that happen instead of piecemeal company by company private shuttles that don't integrate with the system.

Did not have light rail service. It was elevated rail -- specifically, the Orange Line to/from Forest Hills via Egleston and Nubian.

Elevated structures are generally much less pleasant for residents than the fully-separated, at-grade light rail that one finds in Brookline and Newton.

Considering the history of

Considering the history of the MBTA and their current hesitation to do ANYTHING.... establishing a popular and well used private line that documents demand and creates a userbase for that line might be the impetus to force them to do something. Unlike the original consolidation of the system though they probably won't buy the assets of the line and just say "ours now" though. Too bad.

If you mention Brookline and

If you mention Brookline and Newton as having light rail, you should also mention Mission Hill, Allston, East Cambridge, and Mattapan.

The silver line is such a massive disappointment. Isn’t this exactly what the promise was?

... the problem isn't the physical distance separating people from opportunity. It's that the employer occupying that site (with the opportunity) wont hire those in need.

I really do think we're going to be running these empty shuttles so the city approves the developers plan.... at least their community concession "feels good." This is all getting ridiculous.

Someone offers to do the right thing and naysayers jump in to criticize and say, "No one will use that bus." Well let's let this play out and just SEE what happens. If the attitude is always, "That won't work" then everyone who could help will just eventually stop making the effort.

I wish they'd use the first floor for retail space. I used to work across the street, and that area is a wasteland.

Has Jon Cronin ever fancied a drive from the Seaport to Nubian Sq. via Melnea Cass? If he thinks three of those Seaport shuttle busses are going to be running like clockwork between the two at all times of day and keeping a schedule then he's in for some serious disappointment.

Also, has some life sciences community sprouted up overnight in Roxbury that's in need of shuttle service to the Seaport or is this some fantasy play that will end the minute the tenants decide not to pay for it?

For 3 vehicles to provide

For 3 vehicles to provide service every 10 minutes, they would need to complete a round trip in 30 minutes, including boarding time and a buffer for delays. That’s not possible.

Man faces his first federal bank-robbery charge in 20 years
Don't have a cow, but Beacon Hill steak place is opening second Boston outlet in Fort Point, where Bastille was back in the day
Gunfire leads to two arrests in South Boston
Missing your mandolin?
A hazy start to the day due to wildfires in western Canada and US
Citizen complaint of the day: People who went up to New Hampshire didn't all blow their wads on July 4