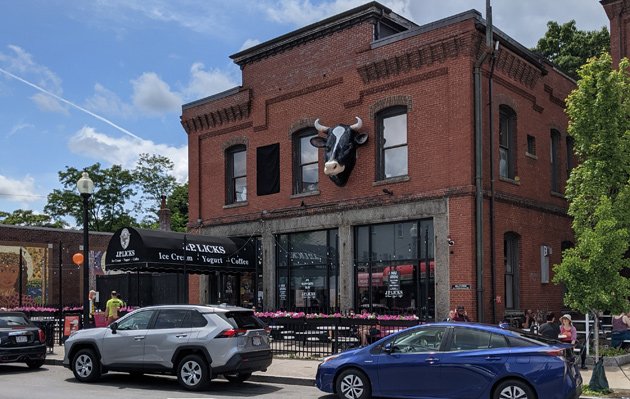 Hard to miss the JP Licks on Centre Street, thanks to the giant cow's head.

The owner of the onetime firehouse at 661 Centre St. in Jamaica Plain this week sued her ex-husband, who runs the J.P. Licks ice-cream chain based there, for some $113,000 in back rent from last year.

In a suit filed in Suffolk Superior Court on Thursday, Kimberly Goldstein, through her Zooephebe Realty Trust, charged that her ex-husband and J.P. Licks owner Vincent Petryk has refused to pay the rent in arrears despite getting nearly $2.9 million in federal pandemic assistance - including money he allegedly said would go towards rent.

Petryk and Goldstein were married when they formed a real-estate trust, called Dada Cow Realty Trust, to buy the large old firehouse on Centre Street in 1998 and turn it into the new home of J.P. Licks - which grew into a chain whose ice-cream and coffee products are made there and where Petryk has his office. About ten months after they were granted a divorce, in April, 2009, Goldstein and a new partner filed a document with the Suffolk County Registry of Deeds taking over ownership of the building under the Zooephebe name.

In the suit, Goldstein says Petryk made his full $23,160.96 monthly rent payments in January and February of last year, but started making only partial payments in March, when Gov. Baker announced pandemic-related shutdowns and restrictions. In June, for example, Petryk only paid $6,583.11 in rent, the suit alleges.

Petryk resumed making full rent payments in January of this year, but has refused to make up the $113,000 Goldstein says he is still in arrears for last year. She said he has refused to make good on the money even though in April, 2020, J.P. Licks got a $1.4-million federal Paycheck Protection Program loan/grant - the application for which states that $173,200 would go towards rent. Petryk got another PPP check in January of this year for $1.5 million, the suit says.

The suit says J.P. Licks never actually shut down at any point in 2020 and that:

Upon information and belief, J.P. Licks has possessed sufficient funds to cure its breach of the Lease, but it has willfully and intentionally refused to pay its outstanding rent balance.

Goldstein is seeking her back rent plus damages and attorney's fees.

Does that include New Jersey?

Does that include New Jersey?

In the course of ripping off his ex-wife, said local businessman defrauded the federal government?

I think that makes it worse. Should have paid up before she had to bring that into the open. It’s going to cost a lot more now.

Maybe he could name a flavor something cute. How about Chocolate Fraud? After you pay for it, there’s no chocolate and no refund.

Is everyone behind on rent in

Is everyone behind on rent in this pandemic a fraud?

PPP loans are to cover payroll and other business expenses. If you're claiming this guy took his PPP loan and bought a speedboat, that's fraud but sounds like you don't actually have a single clue about it, correct?

I filed for 4 PPP loans at my company. It states that 80% must go to payroll costs in order for the loan to be forgiven. Licks could’ve spent the additional 20% on payroll. They didn’t HAVE to spend any in rent.

Funny how the Globe ran this as another “mean landlord” tale. Kudos to Adam for getting the real story.

To be fair, it's not obvious from the court complaint who's behind the realty trust that owns the building.

I didn't do anything really amazing to find the connections involved here, but let's say that, from a reporting standpoint, it's great what sort of records are now online - family court, registry of deeds and assessing information just sitting there. Throw in Google and there you go.

Finding out about the interpersonal battles makes the story that much more interesting.

(and good work from junior Gaffin in the Bulletin on the Sprague Pond story.)

What was weird, though, was getting contacted by somebody involved in the great-pond effort to get her e-mail address so they could send her all this background info. Oh, you don't want to send that my way as well? :-).

...can't your ex-wife landlord still be a mean landlord?

So they should pay rent to

So they should pay rent to the landlord over paying wages to the workers?

That's not how the PPP program worked

You had to fill out a form and list specific things you're going to use the money for, with rent being one of the eligible expenses (I guess under the theory that if you're evicted from your business address, you may not have any income to meet payroll).

You don't have to put down rent as something you need money for (when I applied, I didn't). But in this case, the owner of J.P. Licks did. He might argue he did use the money he got for rent - he did make partial rent payments, after all - but, no, it's not a case of employees vs. rent.

We all promise things when

We all promise things when applying for free money. Doesn't mean a thing.

When you're making promises to the federal government, though.

Especially when the money

Especially when the money becomes no longer free if you don't follow all of the terms and conditions.

You don't know that they didn

You don't know that they didn't follow the terms. Do PPP loans allow reallocation to the actual operating expenses over rent?

Did you read Adam’s article?

…in April, 2020, J.P. Licks got a $1.4-million federal Paycheck Protection Program loan/grant - the application for which states that $173,200 would go towards rent. Petryk got another PPP check in January of this year for $1.5 million, the suit says.

If this isn’t actually the case, then that is what the courts are there for.

I did not say that…

If I was unclear, that is on me, but I’d expect anyone to keep to the promises they made when accepting the conditions of a PPP loan, because the consequence of not following those rules was that instead of a forgivable loan, part (or all, I suppose) of it could become a real loan that must be repaid with interest.

Did they really own the building since 1986?

I’m only asking because the way I remember it, JP Licks did not move into the fire station until ~2000 (maybe late 90s). Until then, JP Licks was across the street where the Purple Cactus is and the fire house was a dance studio.

Just wondering if they owned the property for well over a decade before moving it across the street to its current home.

Thanks for spotting that

You're right. The previous owners bought it in 1986 from the city (which is where I stupidly got that date). The couple bought the building in 1998. I've corrected the date in the story.

There was a bagel place there in the late '80s or early ''90s, maybe a Bruegger's. I think they had half the first floor. They or someone ran a concert series in the firehouse, too. I remember going to a coffeehouse-style folk concert there.

Not long after the original owners bought the firehouse, they signed a 20-year lease with the bagel people.

The bagel owners were based in Burlington, VT, which is interesting because Ben and Jerry were from there and originally wanted to open a bagel place, but the bagel equipment was too expensive so they went into ice cream instead.

...never do business with your future ex.

which is a business contract.

So is Zooephebe Inc doing

So is Zooephebe Inc doing anything useful except for collecting 25K per month after all that hard work of filing a deed with the Suffolk County?

Cause if they do, and they want to be made whole by us taxpayers, they should apply for PPP themselves.