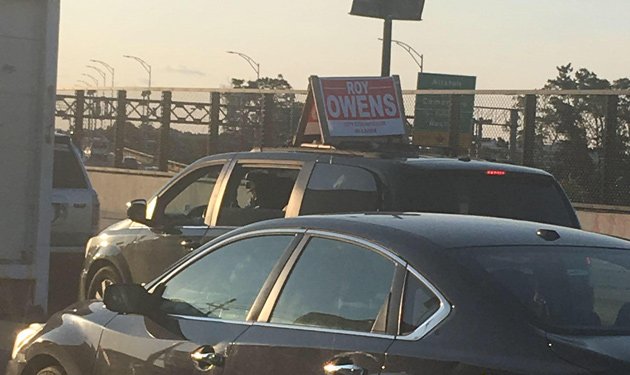 Yesterday, a roving UHub photographer spotted a minivan with a sign for perennial candidate Roy Owens moseying down Comm. Ave by the BU Bridge, its PA system playing gospel music to the no doubt fascinated BU students. After an abortive attempt to lose this year's race for mayor, Owens finally settled on not winning one of the four open at-large council seats.

A pair of professors offer tips to the next mayor for reshaping the Boston Police Department, which include going to court to battle the police union and consider ditching civil service if the union and civil service stand in the way of the professors' recommendations.

Annissa Essaibi George is grossed out that a Willie Gross super PAC backing her has ties to Trumpie types. In fact, she called it "gross." Super PACs, of course, are free to do what they want and don't have to coordinate with the candidates they support - in fact, they're legally required not to.

Map of where local contributions to mayoral candidates are coming from.

No, Michelle Wu is not moving to East Boston. At one of the debates last week, she was asked, "OK, Ms. Smartypants with your fancy-shmancy climate-change policy, would you feel safe moving to East Boston?" (we may be paraphrasing a bit there). She answered the question (basically, "yes"), then added that she's not moving from Roslindale. It was a hypothetical question, so Rozzie residents can keep hoping they get to keep their one elected official, the only one they've had since Dapper O'Neil left office in 2000.

At-large incumbent Michael Flaherty has a few endorsements. At the bottom of this story, you'll find a PDF with some answers by District 9 candidates to questions.

I’m surprised that there’s no mention of Essaibi-George’s TikTok.

When I was young in the pre-internet 60s and 70s, all local politicians had that mobile PA setup
and would have people go driving through the neighborhoods blasting their message. It was a common sight (and sound) at election time.

Those of us living in District 7 have the opportunity to not vote for Roy Owens twice. He is on the ballot for the at-large race AND the District 7 seat, recently vacated by our current Acting Mayor.

We've had many instances of several strong candidates plus Roy Owens. When I'm not yet decided, I say I'll be voting against Roy Owens. This time we get to do it twice.

I haven't gotten any misspelled Printshop 2.0ed flyers from him this year though. Shouldn't I be getting twice as many?

Found this website announcing his intention to run for “United State House of Representative” (sic) again in 2022. (He lost to Pressley last year).

Lots of other fun typos, including a link to “Venmor” (which actually works). Scroll to the bottom for musings on persuasive website design.

A caveat though: the site is “not secure”

If she really thinks its gross

If she really thinks its gross maybe she should reflect on her campaign and policies because its pretty obvious why they would back her.