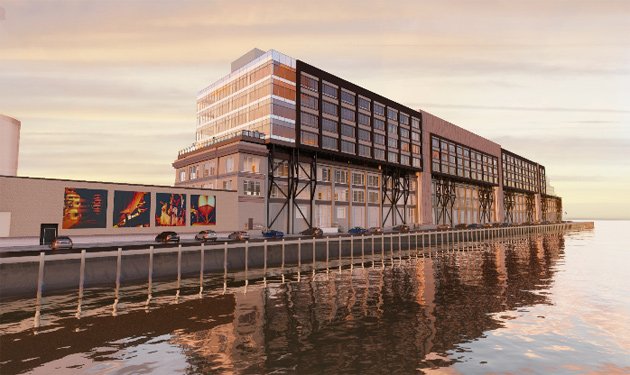 Rendering by SGA of the view from the Reserved Channel.

A developer has filed plans with the BPDA to add four floors to the top of an existing and long three-story building at the end of Black Falcon Pier in the Raymond Flynn Marine Industrial Park on the South Boston Waterfront.

The Davis Companies of Boston says it would lease the resulting 327,600 for laboratory, R& D and office use. The current three floors would continue to be leased for the "water-dependent industrial uses" that are supposed to be the industrial park's main focus. In recent years, the BPDA, which owns the former South Boston army base that became the marine industrial park, has allowed a growing number of non-marine-related new buildings.

The building addition will be supported by a new exterior structural exoskeleton designed to minimize existing tenant disruption during construction and to pay homage to the building’s origin as a working ship loading structure for the U.S. Army. The exoskeleton design also minimizes new encroachments to the existing apron, which is important to maintaining existing marine operations on the south apron.

In addition to the new interior space, Davis is also proposing a new parking deck that would increase the number of parking spaces from 555 to 729. Part of this work would include elimination of a ramp on the cruise-terminal side, which Davis says will let Massport add more parking spaces for taxis and buses at the terminal, as well as public restrooms.

Davis has also proposed reconstructing the intersection of Drydock and Black Falcon avenues to make it safer for drivers, pedestrians and bicyclists, in part by reducing the number of curb cuts at the intersection, and building a better Silver Line stop there.

Davis says if it wins approval, it will pay $2 million into the BPDA affordable-housing fund and $400,000 into a similar job-training fund. will continue the destruction of the maritime industry along with the blue collar jobs on the Port of Boston.

Five or ten years out, could file for approval to convert to a floating mixed-use research and water-dependant industry barge!

When is Boston going to say

When is Boston going to say no to giant new garages? Some people say we learned our lesson about modifying cities to be more car-oriented, but then this keeps happening.

What are they going to do

What are they going to do with the drag racers? Build them a drag park under a bridge like they did for the skater bois? Sounds like a reasonable request to throw in before the BDPA caves and rolls out the red carpet to yet another non-marine industry development. Which they could do something about since uh, in today’s thinking we have those businesses covered and there’s a lot of wasteland at that end of the harbor.

As they have to abandon the lower floors, they can still rebuild the dock.

I was figuring by that point, it would just be an island.

If the seaport gets filled in a floor or two, Seattle Style, it might still work.

Citizen complaint of the day: Fireworks season already?
Citizen complaint of the day: Naked man in the window doesn't meet my attractiveness standards
Developer proposes complex on Dot. Ave. in South Boston that includes a 20-story residential building and, of course, life-sciences space
Developer takes wraps off design for proposed lab building in Flynn industrial park
Massport hopes to open Boston Harbor to larger container ships this fall, but not Ever Given large
2,000 lawn flamingos flock to the Seaport