No kidding, developer swears: This time they're really going to start work on new Boylston Street building where Shreve Crump and Low used to be 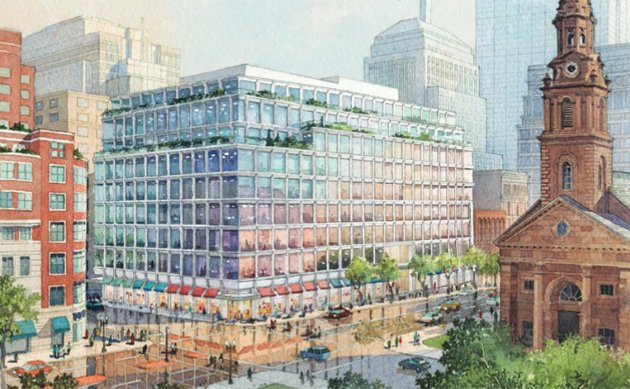 The Zoning Board of Appeal today gave the Druker Co. until December of 2023 to begin actual construction of a nine-story building at the corner of Boylston and Arlington streets, more than 12 years after it first filed for permission.

The board said this is the last extension it will grant for the project, which the company says has been delayed by the Great Recession and then the pandemic, in a way that other large projects in Boston have not been.

He said the company is now in the process of applying for the last ISD permits it needs to begin tearing down the current buildings and putting up the new glass-facade building that would have ground-floor retail space topped by eight floors of traditional office space. "We are moving quickly and hoping to start soon."

The board originally proposed extending the project's zoning permissions until just March, but Hundley asked for a few more months, just in case. "As a lawyer I'm worried about the what-ifs," Hundley said. "Having just four or five months would concern me."

Board Chairwoman Christine Araujo told Hundley she knows Goulston & Storrs is "pretty expert in the permitting processes," so she said she hoped Hundley would put a note in the firm's file on the project that it won't be getting any more extensions.

Is that mirrored glass with oddly realized reflections, or is the building actually gonna be rainbowey?

I have to admit that to make the image not overly, um, tall, I cut out the part showing birds circling overhead.

Another piece of Boston gets converted into a generic turd.

Not just nothing it is replacing something beautiful it’s a loss for the city.

why the Arlington Building wasn't landmarked

I wish it was historically protected, but I recall two valid reasons why it wasn't:

- Historical: although it was the long-time home of Shreve, Crump, and Low, it is not where that company started

- Architectural: the building is not in its original condition, but was truncated to its current form in order to extend Arlington Street south of Boylston Street

Imagine if cars were permanently barred from the banks of the Charles
Flaming manholes heat up Boylston Street outside the Pru
Judge says former celebrity chef no paragon of virtue, but there were too many questions to find him guilty of sexual assaut
Art has a message
Jury selection starts next week for former celebrity chef accused of sexually attacking woman at the Pru in 2017
Liquor-license musical chairs held up due to lawsuit