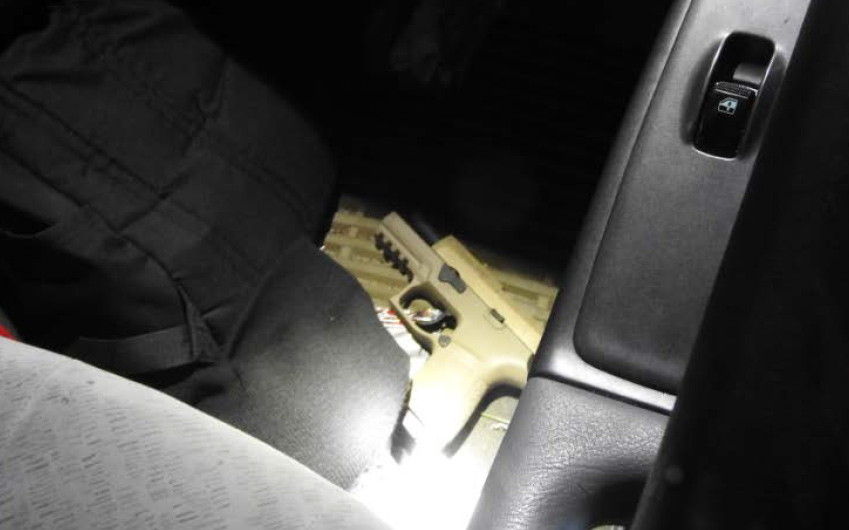 From the affidavit in the case: The gun in the back of Boampong's Elantra.

A Dorchester man who allegedly opened fire on Boston cops the night of the post-vigil rampaging last month now faces charges because one of the cops, a BPD detective, was also a "deputized federal law enforcement officer" - as a member of the FBI's Metro Boston Gang Task Force. Read more.

Boston Police report arresting a man they say used blankets to try to light two cars on fire in Downtown Crossing and the Back Bay today - first a police cruiser and then a Honda Civic. Read more.

The Zoning Board of Appeal this week gave the Druker Co. another year to begin demolition of the former Shreve, Crump & Low building on Boylston Street at Arlington Street. Read more.

Developer says it will replace the old Shreve, Crump & Low building on Boylston Street - and this time, it really means it 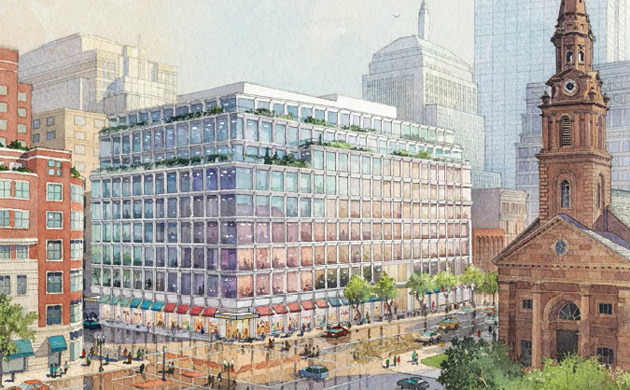 If you were a pigeon flying over the Public Garden, this is what you would see.

The Druker Co., which won city approval more than ten years ago to replace the old Shreve, Crump & Low building at Boylston and Arlington streets with a multi-faceted glass cube, then never did, has asked the BPDA to let it go ahead with the project. Read more.

Boston Police report arresting a local man they say was selling drugs out of a room he'd rented at the Park Plaza Hotel. Read more.

The Garden Club of the Back Bay reports the rescue of a woodcock on Arlington Street. Same one spotted downtown yesterday? How many woodcocks could there be flitting around Boston Proper? Read more.

It's a tight squeeze on the Green Line tracks; at least there's no third rail to worry about

Earlier:
Green Line at a halt; it's all the wires' fault .

A trolley that flat-lined at Arlington means "severe" delays on the Green Line, the MBTA reports. At 12:16 p.m., Matthew Miller took advantage of that sweet in-tunnel WiFi:

Green line westbound is at a standstill - was saying a disabled train at Arlington while we were sitting at Park for 20 minutes, but now we moved a little bit and are still stuck

The Boston Business Journal reports the owners of the Taj Boston are putting it up for sale - and pricing it to move (they paid $170 million for the former Ritz, would accept $125 million).

Back Bay bank held up

Shortly after 2 p.m., the Santander Bank branch at 61 Arlington St. was held up by a black man in a black puffy coat with gray accents. He was about 30.

Angry Florida man with a gun turns Back Bay, cab in the South End into his own personal shooting ranges, police say

Boston Police report arresting an Orlando man they say reacted to being told he couldn't leave the Taj Hotel with a drink by smashing his glass in the lobby, then going outside and firing a round from the gun he was, of course, packing. Read more. 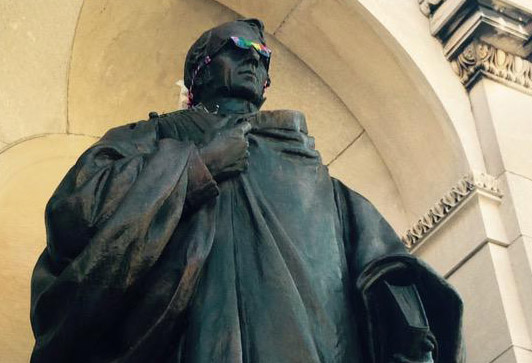 Kathleen O'Donnell spotted William Ellery Channing sporting some new shades this morning at his usual perch at the Public Garden entrance at Arlington and Boylston streets. 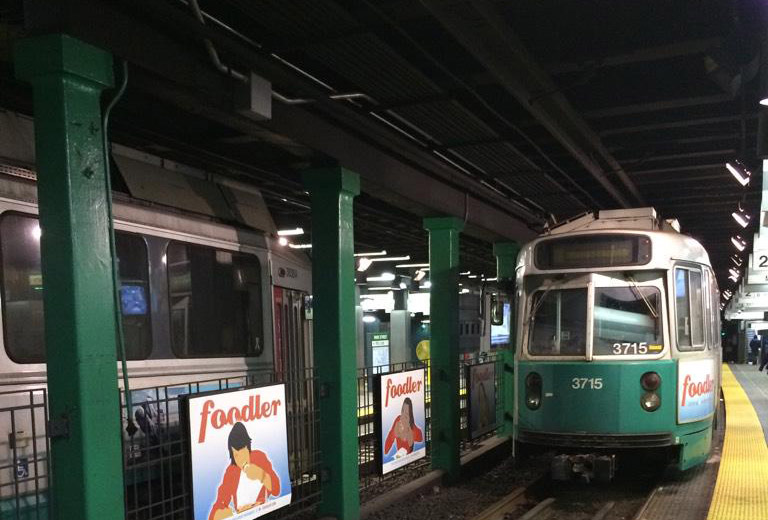 Pining for the fjords at Park Street. Photo by Colin Steele.

Shortly before noon at Arlington, now riders between Kenmore and Haymarket get to enjoy above-ground scenery in shuttle buses.

Sadly, one of the hamsters died

#GreenLine: All branches: Moderate eastbound delays due to power issue.

In response to somebody's query about what exactly "moderate" means when he's been sitting on a trolley that hasn't moved in ten minutes, the T added:

Yes, we describe a "moderate" delay as a major disruption in service.

Gates of the season

Ryan Ruel looks through the gates of the Public Garden at the lights of the Commonwealth Avenue Mall.

Posted under this Creative Commons license and in the Universal Hub pool on Flickr.

Oh, ho: Why Marlborough Street reverses direction the block before the Public Garden

Mike the Mad Biologist explains it was an attempt to cut into the business of the streetwalkers who used to ply their wares at the corner of Marlborough and Arlington in the 1970s:

People would hop off Storrow Drive and drive around the block, find, erm, a 'friend', and drive off. Not exactly the kind of tourism the city was hoping for, so the traffic pattern was changed. Hard to believe today, since the penthouse of Zero Marlborough (the corner of Arlington and Marlborough) recently went for $8.8 million.

Around 8:50 p.m., Boston firefighters and Transit Police rushed to the area of Arlington and Boylston streets after several people reported hearing a loud explosion. Cara Terez, sitting on the Rattlesnake roof deck, tweeted:

As a precaution, the T shut Green Line service as firefighters looked around on the street and in the station for the source of the boom, but they found nothing, an inbound Green Line driver reported the tunnel between Copley and Arlington was fine and service started up about 10 minutes later.

Brian D'Amico tweets police speculate a tour bus may have had an engine backfire or two.