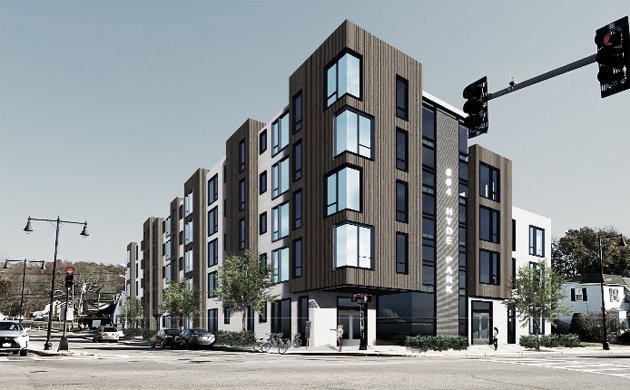 A Framingham developer has filed plans for a five-story, 42-unit residential building at the corner of Hyde Park Avenue and American Legion Highway.

Whiteacre Properties's proposal would replace two "relatively nondescript" single-family homes, one on Hyde Park Avenue, one on Clare Avenue, with a building that would be five stories along American Legion Highway, across from the Canterbury Village condos, but which would step down from five to three stories along Hyde Park Avenue, where it would adjoin a single-family home.

Whiteacre points to the condos as one of the reasons it should get a variance to build a multi-family building on what are now lots zoned for single-family homes. The condos sit in a multi-family zone.

Five of the units would be marketed as affordable.

The company is proposing 13 parking spaces and a Blue Bikes station outside.

Although the design may look at first glance like something completely out of place in Hyde Park, Whiteacre says the building was actually designed to blend in:

The broad facade, along American Legion Highway is broken up using a rhythmic series of bays which provide visual interest and a nod toward classic New England window bays. An emphasis has been placed on using colors and hues that are blended with the visual fabric the existing buildings, which range in size, material and age.The enclosure will be assembled using modern technologies and materials that are in scale with the surrounding brick and lap siding buildings.

in other words Fugly.

I'll say this much

42 units with 13 parking spaces in this area will work- as long as they take out the bike lane on American Legion Highway. The funniest part of the transportation section of the proposal is when they note that the 33 (5 runs total, 3 inbound and 2 outbound, Mon-Fri only) and the 39 (one run total, only inbound, at 4:30 AM, Mon-Sat only) as serving the area.

That said, I'm not an abutter, only a guy who runs in the area. If the neighbors are okay with this, who am I to object, but I am guessing this will not be the final product.

Parakeets are not native to Readville, so this is probably somebody's pet
Will it blend? No, it won't, Hyde Park woman charges in blender suit
You just never know who's going to turn on you: Two guys who attended a wedding together get into an argument at a Hyde Park bar, then one waits outside for the other to slice him up with a knife
Two dead of overdoses in Hyde Park recently
Board approves marijuana mart in West Roxbury - and a grow facility for it in Hyde Park; plans still need state approval
Kids swimming at Turtle Pond probably didn't expect the fire department and troopers to show up