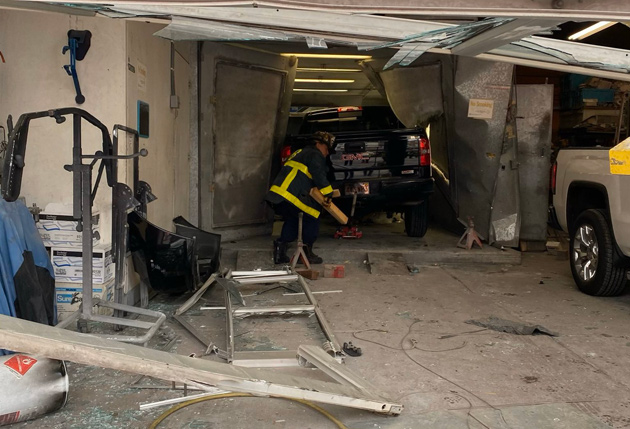 Firefighter after truck was jacked up so victim could be pulled out. Photo by BFD.

The Boston Fire Department reports firefighters pulled a man out from under a pickup truck that hit him at Prestige Auto Body, 237 Hyde Park Ave., around 11:40 a.m. Read more. 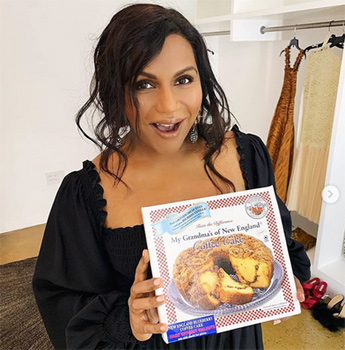 Mindy Kaling stans for My Grandma's of New England coffee cake, made with love (and real vanilla) in a factory at the industrial end of Hyde Park Avenue. Read more.

Boston Police report arresting two teens, one 15, the other 16, they say were unsuccessful in repeated attempts to stab each other in the parking lot of the McDonald's at 1312 Hyde Park Ave. before officers arrived yesterday afternoon. Read more. 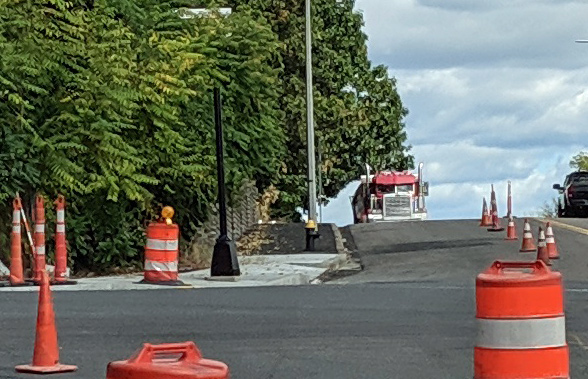 Workers this week have been busy getting both sides of the Father Hart Bridge in Readville ready for honest-to-goodness traffic signals. Read more.

The Globe reports the officer was responding to the McDonald's on Hyde Park Avenue on a report of unruly students from nearby Roxbury Prep refusing to leave; he finally got them out, then allegedly followed them up the street calling them racial slurs.

The guy on the wall at Ron's in Hyde Park speaks

Mike and Bill at Ron's

The left wall in the bowling alley at Ron's Gourmet Ice Cream and Bowling in Hyde Park has featured a large cartoon-like cutout of a guy bowling for several years now. Nancy Glazer Pearl, who does social media for Ron's, found the actual Mike, and his pal Bill, at the lanes the other day.

The boys were back in town; the drink did flow and the blood did spill in Hyde Park bar brawl

Four "large" guys got into a fight inside the Cavan Cafe on Hyde Park Avenue in Hyde Park in May that left one man stabbed - and then shot at as a pal tried to rush him to the hospital - police and the Cavan's bartender told the Boston Licensing Board this morning. Read more. 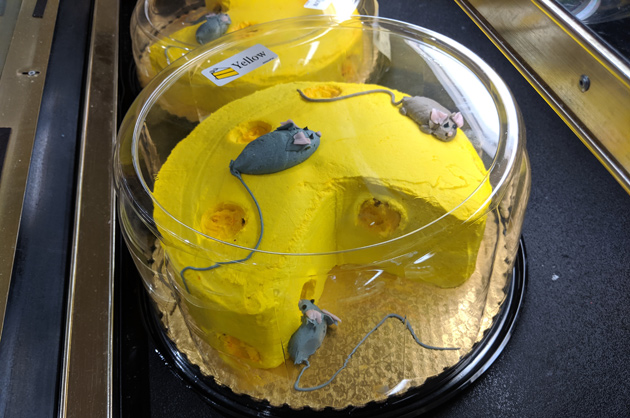 Yesterday, the Shaw's on Hyde Park Avenue in Hyde Park had several mouse cakes, all with edible mice (made of frosting, though).

You never know what you'll find in Hyde Park 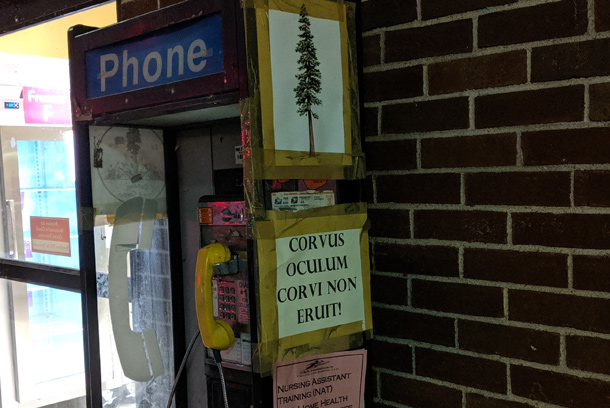 First, there's the seemingly still working pay phone outside the Shaw's on Hyde Park Avenue. And then there's the page with the Latin on it, a phrase that literally means "A crow doesn't pluck out another crow's eye," which is reassuring, at least if one is a crow, but which is an old Roman saying that's equivalent to our "honor among thieves." The saying has been popping up in the southern reaches of the Athens of America for several years now.

WHDH reports on the crash this morning on Hyde Park Avenue at Blakemore Street.

Boston Police report the arrest of a Hyde Park man on gun and drug charges after he was pulled out of a car in Cleary Square yesterday during as part of a drug investigation. Read more.

Boston Police report arresting two men and a teenager on charges related to the guns and plastic bags of marijuana they left behind while fleeing cops investigating a break-in report at 811 Hyde Park Ave., across from American Legion Highway, late Tuesday. Read more. 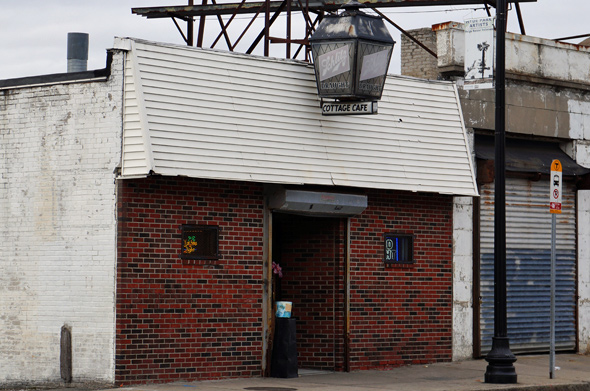 To be replaced by housing?

A real-estate company has started marketing a package of parcels along Hyde Park Avenue where the Cottage Cafe and a lamp factory used to be for possible reuse as a multi-story residential building. Read more.

Hyde Park loses a sub shop, but will gain a Jamaican place 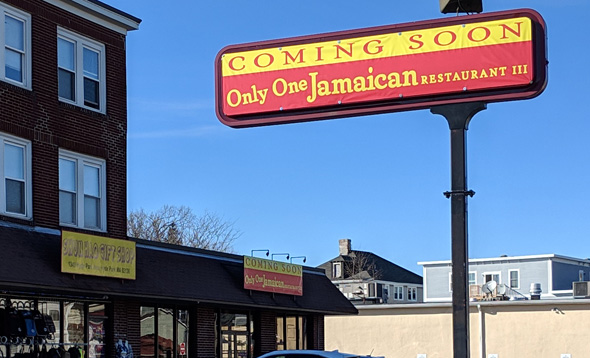 Signs advertising the impending arrival of Only One Jamaican restaurant went up today at 1345 Hyde Park Ave. where a D'Angelo sub shop used to be, next to the Shun Hao Gift Shop and near the Shaw's. Read more.

Closing at the Cavan Cafe, 1406 Hyde Park Ave., seemed to be going normally early on Jan. 13: Sure, people kept pulling into the parking lot after 1 a.m. thinking they could get a drink even though the bar has a 1 a.m. closing time, but that's par for the course. Except this time, the cars kept coming, even as people were leaving from a large party inside. Men started bellowing at each other. And soon, fights were breaking out all over the parking lot and the two cops who initially responded had to call for reinforcements and whip out their pepper spray to try to get things under control. Read more. 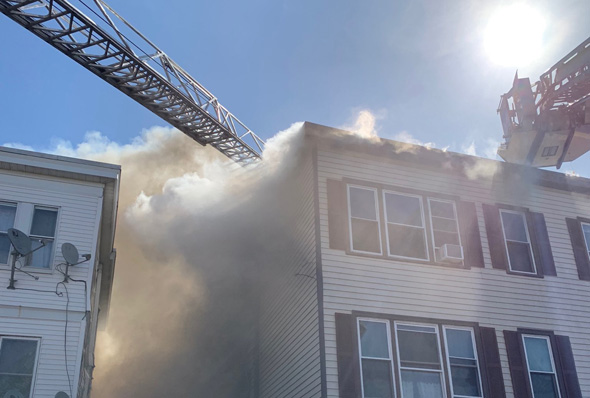 Boston firefighters responded to 920 Hyde Park Ave., near America's Food Basket, shortly before 11 a.m. for what turned into a two-alarm fire in a six-unit triple decker. Firefighters had it knocked down not long after 11. Read more.

The Supreme Judicial Court today upheld the first-degree murder convictions of two men for luring Richel Nova to a vacant house on Hyde Park Avenue in 2010, stabbing him 16 times, then fleeing in his car with a blood-stained pizza box, the contents of which they ate. Read more.

A snow-shoveling asymptote in Readville 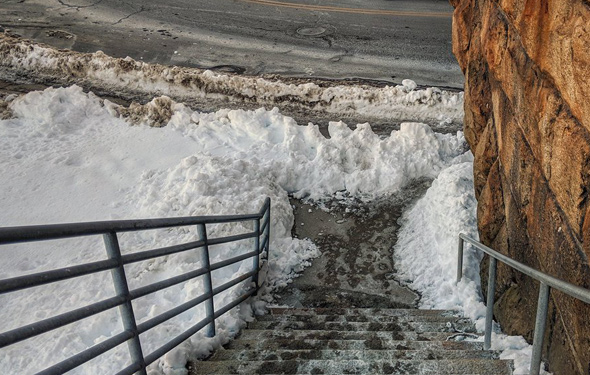 Jake could only marvel at the amazing shoveling job done by separate Keolis and DCR crews at the steps down from Readville station to the sidewalk below: One cleared the stairs and another cleared a path along the sidewalk and yet, somehow, neither thought to make it so pedestrians could actually get from one to the other.

Keolis did promise to send down a crew to finish the job.