State to test various ways to remove bad plants, restore the banks along the Charles River 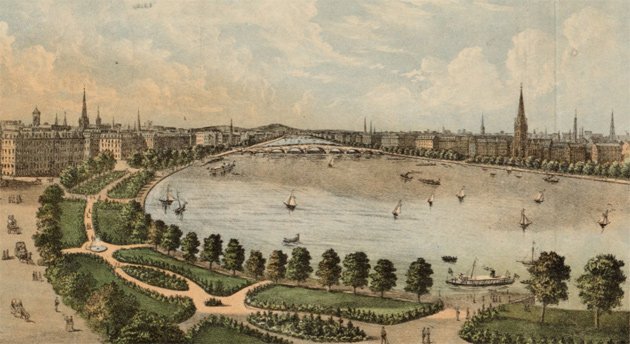 Restoration won't include removing the highways, though. 1886 view of the proposed Charles River parks from BPL Leventhal Map Center.

DCR is aiming for a fall start of a pilot program to test various methods for restoring the banks of the Charles River Basin and reducing the amount of invasive trees and other plants along the banks that it says crowd out native species and reduce the vistas of the scenic waterway.

In eight relatively small plots - the largest 20 by 50 feet - the department plans to test methods of bank restoration and plant control to determine the best way to repair banks that have been heavily eroded, sometime by the wakes of all those motorboats that ply the basin control such invasive species as ailanthus trees and purple loosestrife.

Sometimes, the two goals will go together - a test plot on the west side of the Esplanade dock will involve "revegetation with low-lying native shrubs and herbaceous perennials recommended to prevent degradation of the bank."

The Boston Conservation Commission discusses the proposal at a meeting that begins at 6 p.m. on Wednesday.

In a filing with the Commission, DCR discusses the bank problem along the basin:

The Lower Charles River shoreline along Boston, Cambridge, Newton, and Watertown offer mature shade trees that make a significant contribution to the urban forest. Volunteer plants have established themselves along most of the shoreline and include shrubby growth along the river banks; however, erosive flows and wave action from the river's active boating community have severely undercut parts of the shore. Some trees and shrubs lean toward the water; others have lost the battle with gravity and have toppled in. At the same time, invasive plants have knit themselves into the plant community. Purple loosestrife, Japanese knotweed, multiflora rose, and others expand their range from season to season, squeezing out native plants. Additionally, several non-invasive, but visually obstructive, species such as pokeweed and false indigo bush overgrow and fill vistas where maintenance staff struggle to keep views open for both daily passive use as well as highly anticipated annual events such as the Head of the Charles Regatta. Does this mean that they'll be getting ride of Storrow Drive?

"In 1928 Helen Storrow [widow of James Storrow] donated one million dollars towards the
expansion of the Esplanade parkland but strongly opposed the creation of a parkway
through the Esplanade."
-Charles River Esplanade Study Report. Boston Landmarks Commission

Councilors look for ways to speed up development of dog parks across Boston
Universities in Boston Announce Plans to Scale Down Remote Learning for Fall 2021
Allston party ends when woman falls off second-story balcony
Building with 120 apartments proposed on Braintree Street in Allston
Citizen complaint of the day: Pursued by a snarling hellbeast across the desolate plains of Lower Allston at midnight
Board rejects conversion of Allston laundromat into an apartment after nearby tenants express concern about where they'd wash their clothes