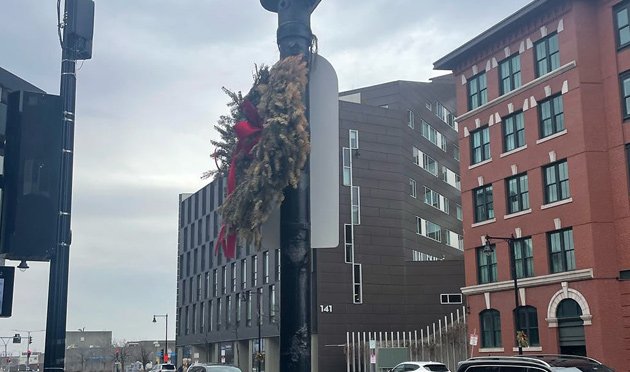 A fed-up citizen filed a 311 complaint on March 17 about a wreath still hanging at Dorchester Avenue and West Broadway in South Boston that included this explanation:

The city marked the complaint closed this morning, along with this note:

The perspective of this photo made me think this was a gigantic wreath hanging off the building in the background.

Humor has it's place

I appreciate humor greatly myself, but I still have to ask. Should an official city website be posting offhand or unprofessional remarks like that? It makes one wonder about the nature of the people working there and how seriously they are taking bigger problems than old wreaths.

...we worry about "unprofessional" "offhand" remarks when they are actually toward the "bigger problems."

Even city officials are people, who are allowed to have a sense of humor. Come back when they show inability to treat serious issues seriously. Not everything is a slippery slope.

On the scale of unprofessional behavior this is way, way down the list. After a couple of very depressing, humorless years I don't think it's unreasonable to inject a little bit of mild humor into one's work, even for a city employee.

And this isn't the "city website... posting offhand or unprofessional remarks like that." The employee who resolved the 311 case (by removing the wreath) typed in a comment when prompted by the app they use -- that's what you see on the website.

I think the reply was

I think the reply was hysterical and I love the offhand remark (I know with certainty if I worked for the city in that department I wouldn't last a week because I'd be much snider than that). People need to lighten up. Seriously, in the big scheme of things a wreath still being hung up isn't a big deal.

You realize things are said every day that are actually offensive and actually cause harm to people, right? Who does this comment harm?

What about the posters

What about the constant stream of extremist political diatribes and insults that users post to 311 that have nothing to do with city services? The whole 311 system is a dumpster fire. It's problem is that it is anonymous.

1) Require user name and password and record the IP address of everyone using the web or app. Google is already doing that. Keep in mind they record your phone number when you call 311.

2) Make people responsible for what they post. Constant abuse gets you shut off. Repeated abuse (traceable) gets you fined. If you file a false police report that is an arrest-able offense.

3) From the laundry list of complaints, determine which are police calls and tell them to call 911 and stop taking police matters at 311.

4) Explain that Graffiti on private property is up to the property owner to resolve. The city will do it for them for free after they sign an agreement and hold them without liability.

5) Stop allowing non-city access (SeeClixFix or what ever it's called) from connecting. That may cut out some of the out-of-state rants. Why should you allow them to generate advertising dollars at the city's expense and misuse.

The people on that city services line take a lot of unnecessary verbal and virtual abuse and at least 1/3 of the complaints are not related to what the 311 line was set up to handle. They have become a virtual whipping boy for every person that got up on the wrong side of the bed or are having some kind of a meltdown and need to let off steam.

Blocked driveway, cars parked illegally... call police
Noisy airplanes... call FAA at Logan, or maybe move out of East Boston.
Graffiti... city property, ok. Private property. Download the form and hand it to the owner.
Tagged postal box... call USPS
Too many helicopters... Sorry the MedFlight was delivering a dying person to the hospital.
There's a fly in my soup... you weren't charged extra for the added protein.

This is all but endless. The only way to fix this is to make people take responsibility for their actions. Great idea when it started, but it's now a wasteland. How often has Adam found a humorous post to share here at UH.

why people will spend longer posting a complain than just fixing the problem themselves. They will go out of their way to take photos of trash instead of saving time and cleaning it up.

Not sure how you expect your average citizen

To take this wreath down. It's high up on the pole so you'd need a ladder and you'll also need some sort of cutters. Most people aren't walking or driving around with either of those.

It’s not a complaint

It’s not a complaint; it’s a service request; tracking mostly minor service requests — potholes, overflowing trash cans, broken steer lights and the like, and the resolution of these requests is the entire purpose of the 311 app, along with collecting statistical data that helps to set staffing levels and adjust policy,

Could another complaint be coming?

If you squint at the photo, there's another wreath across the street, in front of the brick building.

Since it's the first day of Spring...

I just took down mine off of my front door. Luckily, no one turned me in to 311.

.. standing outside the Mishawum Housing community in Charlestown. It doesn't light up, but it's still all decorated. Maybe this "concerned citizen" can complain about that too!