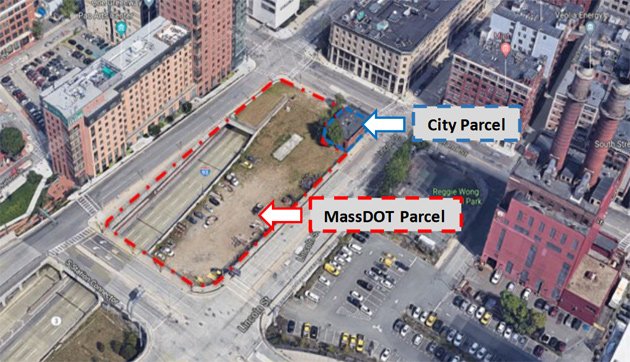 The MassDOT board today approved a 99-year lease for construction of a new building between Kneeland, Lincoln and Albany streets that would include a deck over a part of I-93.

The winning bid for the 1.4-acre site, by Peebles Corp. and Genesis Companies, both minority owned, calls for 12 floors with 218 residential units - 40%, or 84, of them to be marketed as affordable - and 8 floors of space for life-sciences, or biotech, research.

The building would have 120 parking spaces. The ground floor would have about 2,500 square feet of retail space.

Part of the development will include an extension of the Rose Kennedy Greenway, MassDOT says.

The proposed contract calls for Peebles and Genesis to pay the state $61.5 million up front and then make yearly payments for the next 99 years, starting at $1 million and then increasing by 2.5% each year.

State officials had initially proposed setting aside a much larger piece of land for development, stretching from 93 across Lincoln Street to land that now houses a steam plant and a MassDOT office building, but that attracted no bidders. In contrast, the smaller parcel, known as Parcel 25, received six bids, MassDOT says.

Thank you for sharing this photo with your post. I read about the project in the Boston Globe but I couldn't place exactly where this was going to happena and actually thought they were referring to the piece of land on the otherside of the expressway with the parking lot and red building in the photo you shared. I hope this project can get the greenlight and they can begin building over this part of the expressway.

I was concerned the new

I was concerned the new building would not have new housing or life sciences. What a relief that it has both!

Not that I don't think they should build it. There's just no way I'd want to live in a building with "life sciences" labs.

Labs actually have a pretty

Labs actually have a pretty defined rating system based on security, ventilation, if there's residential in the building, etc - and then the building cannot allow activities that exceed the limit of their rating. I think there's actually only 1-2 buildings in Boston that have a high enough rating to do things that you're presumably thinking about - highly infectious viruses with easy escape paths, flesh eating bacteria, etc.

For a building where there's apartments mixed in, it's probably going to be things like "dna work" and "slides with cancer cells" and such. You'd be at a higher environmental risk living in a mixed building with art studios (turpentine, resins, beatniks....)

I'd be more concerned about highway emissions

Than I would about low level life sciences lab space in the building.

Ever lived in a building with a restaurant?

About 2 years ago Chinatown ….

…. had the worst air pollution in the entire state. Maybe that went down during the pandemic, but it won’t last if traffic levels keep increasing. There is no protection from expressway and train yard emissions.
This building could possibly end up having some of the safest indoor air in Chinatown because of ventilation requirements for the lab.

Will the street frontage on

Will the street frontage on Lincoln, Albany, and the South Station connector be anything better than a blank wall which perpetuates the highwayland feel of the area?

What is that building on the city-owned parcel? An electrical substation?

What will the Greenway extension be? It looks like the corner of Lincoln and Kneeland might technically have been parkland, since the fencing left that corner accessible until about 3 years ago. https://goo.gl/maps/HeXikncunXkCTfyd8

The city parcel is the High

The city parcel is the High Pressure pumping station for the Boston Fire Dept.

1) Maybe. The Globe has a render facing the "rear" (SS Connector) side of the building that seems to imply trees, maybe a parklet? There's a pedestrian connection to Hudson Street right here as well as the ped connector down Albany to Ink Block, so not a totally unreasonable place to have a secondary entrance. 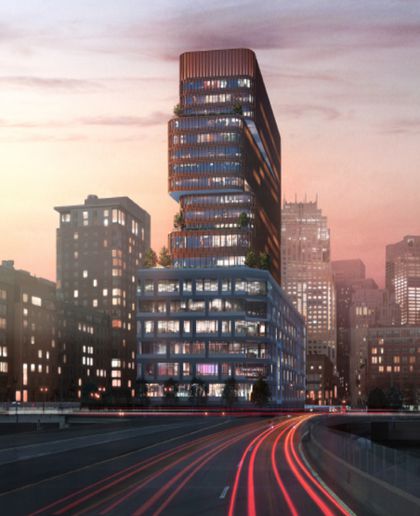 2) It's a pump house for the tunnels. Per Boston Business Journal, "The winning bid proposes a cap over the I-93 ramp that would extend the Rose Kennedy Greenway. The site features a sliver of city-owned land that includes underground pump infrastructure, but the developers have agreed to decommission the property's pump house and create a new system for the city."

3) Given the cost of developing air rights, and based on the render in #1 and the statement in #2, I expect the "Greenway Extension" will be the ~1/3 of the property directly above the I-93 tunnel (including the part currently open to air).

This architectural trend of misaligned cubes creating overhangs need to be thrown in the trash ASAP. I can't wait for it to pass.

Obviously the need to deck the 93 plays a part

but why does the city always try to sell / lease these lots to a single developer? It seems like it narrows the scope of who can bid, as evidenced by the fact that the larger piece of land received no bids. It slows the process of development down as everything is going through one developer.

I’m no expert, but that feels like one of the problems with the green lot on Tremont in Roxbury across from BPD. One developer had the rights for over a decade before the city took them back. If the city just parceled out the land, it could’ve been built up over time and each new development could react to how the previous ones panned out.

And small lots aren’t even a barrier to density and tall buildings. Jersey City is building 20-30 story mixed-use high rises on single family house sized lots. (see here) Boston could definitely use some of these towers in transit oriented development!

State, in this case

But they sort of did what you suggested. The original plan was to auction off a much larger parcel (like 5 acres) that included the steam plant and that office building that always makes you wonder what it's doing there (if you look at the top, you can still see where the Wang logo went).

Nobody bid, so the state carved off a smaller piece and, this time, got six bidders.

Yes, this can leave smaller developers out, but a larger development can be more ambitious and that can be desirable in an urban core where large vacant parcels are rare.

Chinatown bakery no more
As clock ticks down on the Orange Line, Boston adding temporary bus lanes to key Charlestown roads, shutting some roads to cars downtown and in JP and Back Bay
Boston officials want T to extend Orange Line alterna-bus service to Chinatown
Man arrested for Chinatown rape
Police hunt suspect for another early morning rape in Chinatown
Police ID suspect for rape at Tufts T stop, now they have to find him