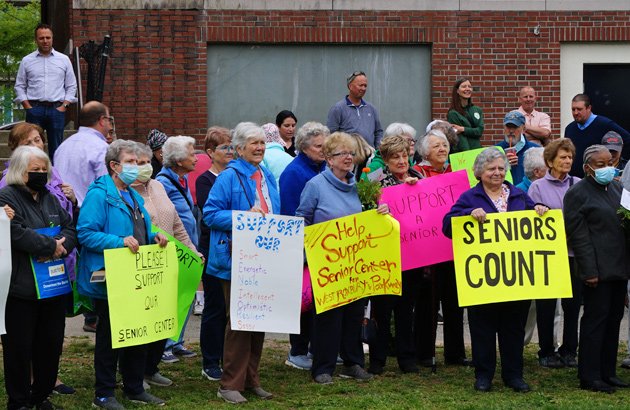 West Roxbury seniors were out in force at Billings Field this morning to press Mayor Wu to help them get a neighborhood senior center built. Wu, there for one of her neighborhood coffee hours, gave them a shout out as she addressed the roughly 200 people who attended.

Before taking a mic, Wu slowly walked through the crowd, stopping to listen to people with issues, as an aide took notes. People not talking to the mayor got free Munchkins, free potted marigold plants, even free Boston drinking water from a BWSC faucet wagon.

There were also dancers, and little kids from over at the Y: And, of course, in what has become a tradition at Wu's public appearances, a small knot of maybe five covidbreathing bucket bangers showed up - late - to try to disrupt things, although one of them, a QAnon conspiracy theorist, was fairly quiet: Catherine Vitale, who made the trek over from Dorchester with her kids, professed to be very, very concerned about the alleged effect of masks on Boston school children, but apparently was less concerned about the effects of firing up a bullhorn siren just a few inches from her son's ears:

See? West Roxbury can't be that rich. They don't even have a senior's center.

I know that HP does not have

I know that HP does not have a senior center either.

You have to wonder ….

… what being dragged to things like this does to kids.

Former Green Party presidential candidate and Hezbollah supporter. He figures prominently in this blast from the past:

Catherine is/was a big Dr. Shiva supporter, believes the 2020 presidential election was rigged and the UN is pushing Agenda 2030 to take over the country.

For a second there I thought he was prepping for a Jerry Garcia biopic.

Also, looks like Vitale got her eye protection from a fan convention of the original V series. If any rats go missing near her, you know it was not a miniseries but a documentary.

You could put it right here, right where you wouldn’t let the black and brown kids learn: https://www.universalhub.com/2019/proposed-charter-school-roslindalewest...

Or screw it, right in the middle of your beloved Centre Speedway (not the gas station): https://www.universalhub.com/2022/another-pedestrian-hit-west-roxbury-in...

Or maybe on one of the many prime development spots that you won’t let anyone build new housing on: https://www.universalhub.com/2022/developer-says-hes-going-build-21-cond...

Buildings for me, not for thee. Westies.

This totally is lost on me,

This totally is lost on me, why do they need a senior center? After all this, the city has to step in to plan and provide activities for them? Get jobs.