When South Station was big 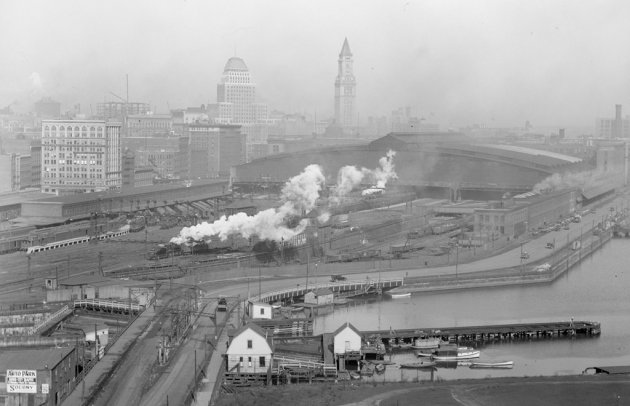 South Station and what little there was of the Boston skyline in 1930.

On New Year's Day, 1899, the first train steamed out of what was then called South Central Station at Atlantic Avenue and Summer Street. Built to replace the four other train terminals south of downtown, the station was physically one of the largest in the world - and for decades served more passengers than any other station in the US. It had 26 platforms, apartments for railroad workers, 45 bathrooms with automatically flushing toilets and a separate women's waiting room with lounge and rocking chairs and cribs.

News photographer Leslie Jones chronicled the station's life in the middle of the 20th century, when trains were the dominant mode of transportation and the station went from Atlantic Avenue to Dorchester Avenue along Fort Point Channel. Here are some of his photos.

Among its other features, South Station had a giant "shed" to protect riders going out to or getting off trains - torn down in 1930 due to corrosion caused by salt from the nearby harbor (see it larger). Inside the shed (see it larger): Some trains would enter the station via large bridges over Fort Point Channel, which were eventually torn down for construction of the Big Dig and the Ted Williams Tunnel (see it larger): Since the train lines never were electrified, steam locomotives chugged into and out of the station in the early parts of the century (see it larger): In 1917, Jones captured draftees waiting for the ride to Fort Devens (see it larger): Even at its busiest, South Station had quiet times (see it larger): Not all journeys to South Station ended well (see it larger). Today, of course, the state is trying to convince the Postal Service to move from its South Boston facility so more platforms can be added back to the station.

Photographers like Jones knew South Station was the place to capture visiting celebrities and dignitaries on their visits to Boston: Al Smith, 1928 - and note the people standing on the el that still ran along Atlantic Avenue (see it larger): Prince and Princess Takamatsu of Japan, 1931 (see it larger): For more information:
South Station History.
South Station Tower 1 and Interlocking System - Discusses the history of the station and its giant switch system.
Time was, trains were guided into South Station via hand-cranked levers.
From trains to cars: The evolution of Park Square - Site of one of Boston's earlier train stations (and one of its first helipads).
When Boston was on track.

Photos from the BPL Leslie Jones collection. Posted under this Creative Commons license. 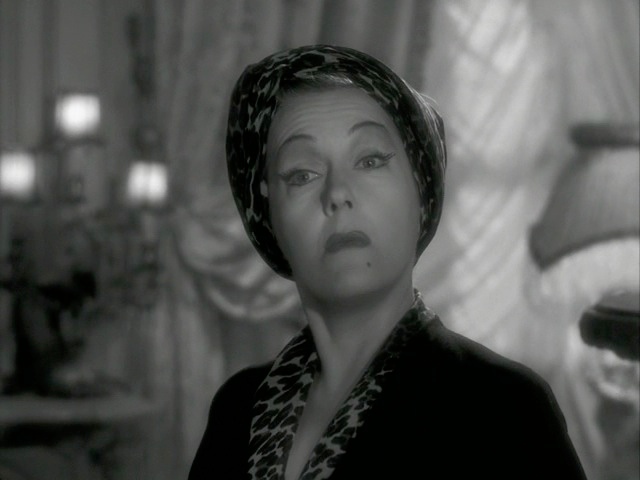 Thanks for sharing them, Adam.

One other thing South Station had back in the day was a candlepin bowling alley. As I recall, there were sixteen lanes, arranged eight to either side of a central cashier's desk and shoe rental station. It was actually below street level - you had to go down a flight of stairs to reach it. The stairs were located inside to the right of the tracks; in the station configuration as it now exists, think of where the doors exit outside toward the bus depot.

I have fond memories of it because it was the first place I ever bowled. My Mom took me there when I was seven or eight as a reward for being a good boy when I had accompanied her on a downtown shopping trip!

I remember the South Station of the 70s & early 80s

It was basically a big empty room with a few wooden benches and one large coffee kiosk in the middle called "Best Coffee in Town". And, truth be told, the coffee was excellent.

And they served green bagels on St. Patrick's Day

Back when you shared the waiting room with a flock of pigeons, at least in the winter.

I remember going there as a youngster in the early 70's for Catholic Mass. There was a chapel inside. I believe it was called Our Lady of the Railways. It would have been in the part of the building along Summer Street that got knocked for 245 Summer Street (Stone and Webster, now Fidelity). It was a quick service, perfect for my dad who did not want to hear a homily but still get in his obligations.

One fond South Station memory - My grandfather was born in East Boston in 1903. His father worked on the docks and the train yards for Boston and Albany RR. My great grandfather died in 1909 and my great grandmother did Mitt Romney's dream and self deported herself back to Ireland, where my grandfather lived as an American citizen from the age of 6. He only came back, for his only visit, in 1976. He was a very quiet man but when he got to the outside of South Station on a quiet summer Sunday evening he almost seized up. He said he could hear the old steam trains and the feel the bustle of when he used to visit his father at the station. He teared up a bit and we went onto Castle Island to watch the planes come in off of the water.

Kudos for Mike Dukakis holding onto this place when it was proposed to knock it and great job by Stull and Lee who designed the renovation in the 80's.

And boos, of course, for the BRA

Which wanted to just tear down the remaining part of the station.

B-BUT URBAN RENEWAL IS SUCH A GREAT TOOL!
TRUST US!
WE KNOW WHAT WE ARE DOING EVEN IF WE SWEAR IN COURT WE DIDN'T LAST TIME!
NOT A SMIDGEN OF CORRUPTION!
THAT'S NOT A LANDMARK!

And they succeeded to some extant.

More than half of the waiting room (today's ticketing hall and Club Acela) was knocked down to make way for the Stone and Webster building, and the whole wing along Atlantic Ave (what we now have there is a pretty authentic reconstruction of what was removed fewer than 20 years before restoration). I think it would be poetic justice if the MBTA ever gets the USPS property for it to go whole hog and get and knock down the Stone and Webster building for needed South Station expansion as well (and restoration of the lost section of that wing, of course). That thing has been a stain on the block since it was built.

"the whole wing along

Wow, I had no idea. And I consider myself pretty good at spotting architectural fakery.

Is the Summer Street wing also a reconstruction?

After the loop closed

The bowling alley came after the underground loop for trains to turn was decommissioned and closed.

I didn't know there was an underground turnaround. My first trip to the bowling alley was around 1965. The station was certainly not doing enough business, even then, to make anyone think a fair-sized bowling alley could be a success. As a matter of fact, the times I did go to that bowling alley, my lane was usually the only one being used.

So, what year was the turnaround closed and the bowling alley opened?

There is a lot of really great history associated with South Station. Thank you for writing this post.

How many tracks could be

How many tracks could be restored as an interim project without tearing down the Post Office? From what I read, the Post Office took over the tracks above 17. Yet there are only 13 tracks today.

awesome article and pics, thanks

The last of the storm moves out
Man stabbed in the neck near State and Congress downtown
New Hampshire man gets to fly his 'Christian' flag over City Hall Plaza tomorrow as City Council begins work to ensure he can never do so again
More trouble at old Government Center Garage site: Four-alarm fire
This isn't Times Square on VJ Day and you can't just grab some random woman and kiss her, man learns on the Green Line
Kid learns train conductors can ask his shorty where she's heading