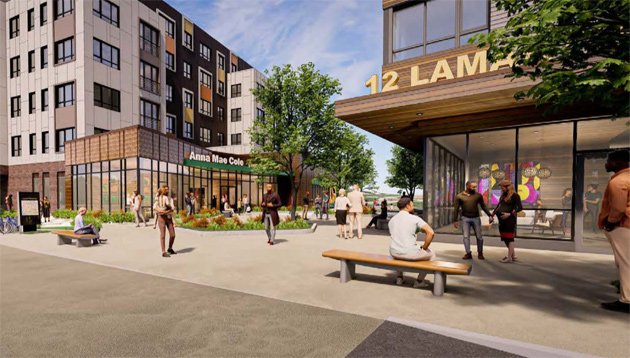 Three non-profit groups have filed plans with the BPDA to replace roughly half the Mildred Hailey public-housing complex in Jamaica Plain with a new mixed-income community over eight to ten years.

The BHA had selected a consortium of the Community Builders, Inc., the Jamaica Plain Neighborhood Development Corporation and Urban Edge to replace seven current large Mildred Hailey buildings, with 253 apartments, along the Southwest Corridor and Centre Street. The consortium's proposal calls for construction of seven new buildings that would include replacements for those units as well 437 additional apartments aimed at people from low income to upper middle income - and a new community center. The proposal is technically phase 1 of the BHA's long-term plans to completely replace all of Mildred Hailey, which has a total of 804 subsidized apartments in 29 buildings, with new housing. However, the BHA has yet to request proposals for the remaining sections of the apartment complex.

Construction will take so long in part because of a phased approach in which the BHA will attempt to move residents from a building about to be torn down into an apartment elsewhere in Mildred Hailey.

In addition to new apartments, the proposal calls for a complete re-alignment of buildings on the 7-acre site to better fit in with the surrounding streets and neighborhood, in an attempt to make it less forbidding looking from the outside and to make it easier for residents to walk and bike through the site. The proposal would also eliminate the numerous zig-zag pockets that have proven difficult to monitor for potential criminal activity.

The existing Mildred C. Hailey apartment complex is a series of angular roadways that often go through, or end in surface parking lots. The Project team has worked to design an alternative layout that provides critical connections to the surrounding street grid at existing intersections. This includes both an extension to Lamartine Street, creating a new four-way intersection that will allow vehicles to cross Centre Street from the south onto the Project Site and through to Heath Street and Bromley Street on the north side of the Project Site, and a pedestrian passage linking Parker Street to Centre Street. The Lamartine Street extension is the first step in reconnecting the Project Site to the larger surrounding neighborhood. When completed, residents and visitors will no longer have to walk, bike, or drive completely around the Mildred C. Hailey apartment complex to reach neighborhoods to the north. There will also be wide, tree-lined, ADA-compliant sidewalks on both sides of the street with two, raised pedestrian crossings to slow traffic. Buildings 1A, 1B, and 2 will have entrances on Lamartine Street extension that will enliven the street and have access to open spaces that link Lamartine Street extension to the Southwest Corridor Park and surrounding amenities.

The creation of these new open spaces along with the new street connections and pedestrian pathways through the Project Site will create the feel of an urban village and will strengthen the Project Site’s integration with the surrounding community.

The proposal calls for 233 parking spaces in new garages and 76 spaces on streets on the site.

The consortium hopes to begin construction in 2022, starting with two buildings off Heath Street that would include a new Anna Mae Cole Community Center. View from the Southwest Corridor: Overall this looks like a vast improvement over a 10 year period. What do the critics say?

do they envision using to entice the elderly shoulder-patch Cambridge couple in the rendering to move into the Bromley Heath projects?

JP has no shortage of well heeled shoulder

It'll be nice when this is done in 20 years.

There's an established template for this sort of redevelopment

which has been used at Harbor Point (née Columbia Point) and Mission Hill Main. These places are now much more attractive and have lost their scary reputations, but what has happened to the people who formerly lived there?

This project is trying to mitigate that, by going in phases, essentially:

Source: my master's thesis was basically this exact project. (I didn't know there were plans for it until I had started.)

Seems like another example of gentrifying Jamaica Plain to me..

And one of the reasons construction will take so long (ten years!) is to try to ensure that people living in the buildings now will get to remain in Mildred Hailey (granted, with the inconveniences that come from moving) - things would go a lot more quickly if they just tore down all the buildings at once and replaced them, but then the BHA would have to find apartments for them elsewhere in the system (when Franklin Field was being rebuilt, some tenants wound up at Washington-Beech in Roslindale).

Also, money doesn't grow on trees and none of this will be funded by private development. Subsidies, big ones, mostly from the feds and some state and local, will be needed to pay for this entire development. You can't grab it all at once. There are funding cycles. You're likely to get funded for the 2nd and subsequent phases if you can show success in the early phases. And yes, moving people in and out.

There will be addition of

They need to include a lot of

They need to include a lot of small and medium sized shops at the street level. The giant storefronts that the JPNDC likes to build aren’t really affordable to new businesses and remain empty for long periods between failed tenants, as in their building a few blocks up at Creighton St.

You mean a local shop selling small food items from the DR doesn't want a 4,000 square foot space? Sure they do. They just don't realize it. What are you a commie?

You’ve sparked my curiosity with mixed income and have my full attention With non profit.
This should be the future of development !

I wonder if the plan to do it

I wonder if the plan to do it in steps has anything to do with the glacial pace of the Bunker Hill Houses redevelopment. They laid that one out as a single project with one developer and it's massively behind schedule. Perhaps breaking it down into phases with different developers makes it easier for the community to swallow? This looks great to me.

Last time I was in a Bromley-Heath home, I felt serious claustrophobia. Particularly on the way to the home in the stairwell and elevator lobby. So some of this looks good to me.
If all the current residents will be able to be housed onsite while their units are rehabbed, that could work. I’ve seen it done well in Cambridge.
How this is managed and designed will make all the difference.

The first round of residents

The first round of residents will have to move, unfortunately, since there are not enough units available at Mildred Hailey today to house them, but they will be given the option to return once enough units have been completed to make space for them, or they can stay at their new "temporary" home indefinitely if they wish.

Why would they possibly want

Why would they possibly want to return?

Next to the Orange Line, next to the Southwest Corridor, next to a supermarket, next to plenty of Latino shops and restaurants, a fairly short walk to Jamaica Pond ... what's not to like?

Not to mention there are a

Not to mention there are a lot of people who have lived there for decades and built significant communities of neighbors. Some of these people are senior citizens. Moving for these people will definitely be disruptive.

The old headline wasn't inaccurate, but without actually reading the story, it gave too many people the impression it would mean less or no low-income units.