Developers propose West Broadway office building in plan that would preserve Amrheins, but in a smaller space 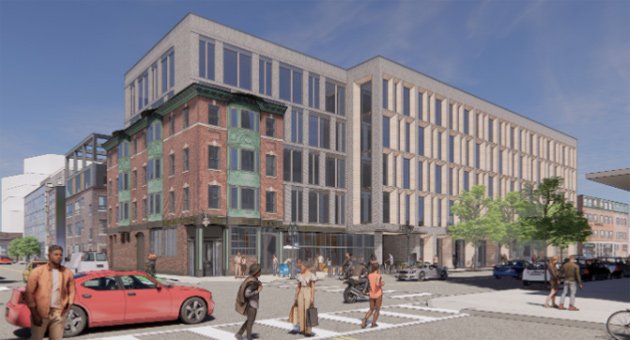 The Matteson Companies and GFI Partners today filed plans with the BPDA to build an eight-story R&D building on what is now the Amrheins parking lot on West Broadway - and the single-story part of Amrheins, while saving the four-story apartment building housing the rest of Amrheins.

In their filing, the developers say Amrheins would continue to operate in the remaining space as a bar and cafe - with the addition of outdoor patio seating, but without its own parking. The six apartments that now sit above the restaurant would remain.

The Project will preserve a beloved, older corner apartment building and replace the surface parking lot with a new mixed-use building, the Project will contribute to the revitalization of the Broadway Station corridor, and will complement both the existing neighborhood fabric and newer development projects.

The plans also call for retail space in the new building's ground floor and an underground parking garage with 25 spaces - for workers and visitors in the new R&D building. The Amrheins lot now has 44 spaces.

The new building will be constructed of "cross laminated timber" rather than steel and concrete.

The new building proposed as part of the Project is designed as a calm, rectilinear form, with a few intentionally placed massing articulations along the street edges to match the vertical nature of many of the buildings along West Broadway. The building façade will take cues from the existing brick warehouse language evident around the Project Site. It is anticipated that most of the building will be clad with a neutral-colored brick and will have a “calming” effect in a neighborhood with a variety of architectural styles, today.

The view from across Broadway:

The developers hope to begin two years of construction in the fall of 2021.

I think it’s a baby [email protected]#i% whale....awful....be nothing left of Southie. Agree area needs improvement but damn.....how about some moderate rental housing over life science

You can apply at the BHA on Chauncy Street.

I'll take jobs located near transit any day over a parking lot.

It's about square feet, and nothing more.

Most of the architects "designing" in Boston today don't have an original thought in their heads.

They're cheep-er by the dozen
Motorcyclist dies in early morning crash in South Boston
Upscale craft-cocktail bar with 'a boho setting' approved for Fan Pier
The other disaster at the power plant
From the Boston Department of Bad Timing: Mayor celebrates International Building Safety Month, then has to rush over to South Boston
First responders, surgeons able to free trapped, injured worker at power plant without having to amputate his leg