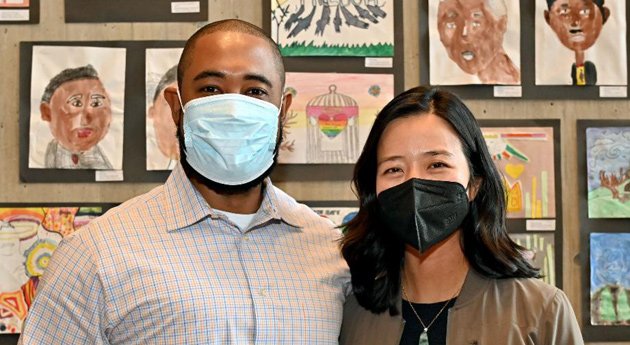 Mayor Wu today announced her first appointment to the Boston School Committee: Stephen Alkins, the diversity, equity and inclusion officer at TERC, a Cambridge-based non-profit that focuses on STEM education, where he has worked to "help dismantle systemic inequities within STEM education, support youth STEM identity development, and engage and include underrepresented/marginalized communities in authentic, collaborative research experiences."

Alkins, who has a PhD from Brandeis University in cellular neuroscience, is also a "spoken Word/SLAM poet who uses art to diversify participation in and enhance understanding of STEM concepts."

Wu has one more school-committee seat to assign.

Last year, acting Mayor Kim Janey appointed Lorena Lopera and Rafaela Polanco Garcia to replace two members who resigned over the Westie Whites text messages, but their terms ran out when Janey's did after the November election. Wu reappointed them.

Members Ernani DeAraujo and Hardin Coleman have terms that expired on Jan. 3. Mayor Walsh appointed Coleman in 2013. He appointed DeAraujo in 2020 after member Michael Loconto resigned over the way he mocked Asian-American names on what he thought was a muted Zoom link at the same exam-school meeting at which the two other members exchanged their text messages.

In November, voters overwhelmingly approved the idea of returning to an elected school committee. However, the vote was non-binding and will take action by the city council, the mayor, the state legislature and the governor to put into effect. Boston is currently the only community in the state that does not elect its school committee.

Why is this good news?

Time was, you could rent an apartment, then grab some donuts for the celebratory road trip in your Chevy Vega
BPD captain who had been on paid leave for more than two years cleared of most charges
Rats running amok through Boston; residents, councilors demand action
No matter where on earth they roam, people will know Boston is their home
Court to Quincy: Boston can rebuild its bridge to Long Island
All diseases skillfully treated