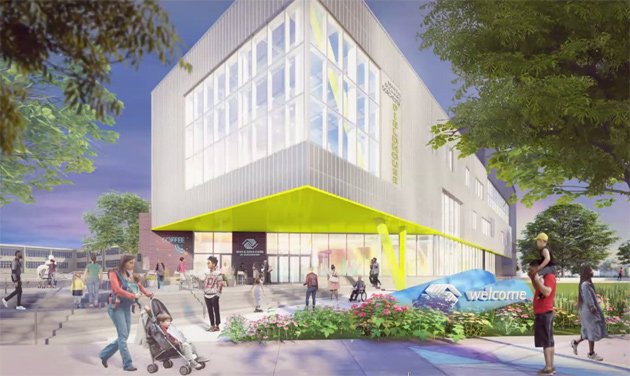 The Zoning Board of Appeal today approved plans by the Martin Richard Foundation and the Dorchester Boys & Girls Club for a three-story field house on Mt. Vernon Street in Dorchester that will include everything from basketball courts and running tracks to an auditorium and cafeteria.

The 75,000-square-foot Martin Richard Dorchester Field House , at 301 Mt. Vernon St., on land leased from Boston Public Schools. It would be open during school days to students from the neighboring McCormack and Devers schools, then open to members and the public in the evenings and weekends.

Bill Richard, president of the Martin Richard Foundation - named for his son, who died in the 2013 Boston Marathon bombings - said the new facility will be provide recreational and athletic opportunities for a wide range of people - and will include quiet areas for children who might not do well with loud sounds from basketball courts, tracks that could be used for walking by senior citizens and an auditorium for theater and other performances. A cafe will provide sustenance for people spending a day there.

Other facilities will include indoor fields, training rooms, classrooms, a teaching kitchen, offices and conference rooms.

"This is a pretty exciting project, board Chairman Mark Erlich said. The board voted unanimously in favor, although board member Eric Robinson abstained, because his architectural firm, RODE Architects, designed the building.

The BPDA board approved the proposal in March.

It still makes me angry that

It still makes me angry that the Walsh admin arranged to use Boston Schools land for 99 years for the fieldhouse when the city agreed to expand the middle school from a middle school to a 7-12 school and the plan for it had not been drawn up yet.

It sounds like Walsh had made a commitment to Bill Richard and saw no other way forward. I favor the Martin Richard Foundation's project, I just don't think it's right to take the school's land to do it.

I have a serious case of cost confusion...

This sounds like an amazing facility and the 50m estimated price tag seems reasonable given size/scale.

Meanwhile, the City has allocated 25-30m for a seasonal use, outdoor pool in Charlestown (Clougherty). What the actual F?

Columbia Point is still a thing

Columbia Point, that's an old school Boston name. That particular area is now known as Harbor Point @adamg. I think the only thing that still remains as identified in Columbia Point is UMass Boston, at least according to Google Maps.

The whole area will always be Columbia Point in my heart though.

Night of burst pipes across Boston: Hospitals, theater, mall all hit
Fancy barbecue place on Blue Hill Avenue that never actually opened could be replaced by a Dominican restaurant and function room
These things can just fester; dead train in Dorchester
Boston's latest murder victim was just 13
Three students at TechBoston Academy in Dorchester stabbed in fight near school
Group of teens attack another group of teens and a window on a T bus with bricks; two injured, windows smashed, police say