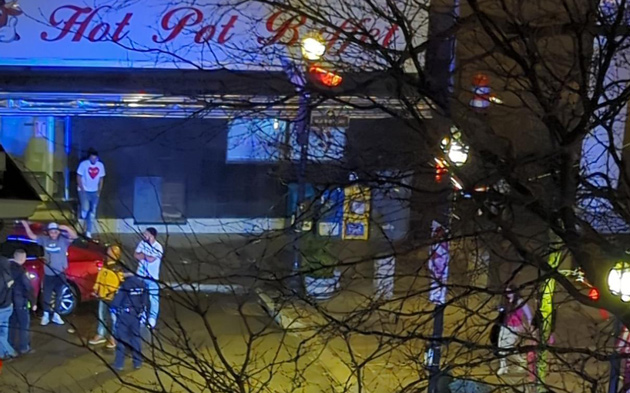 Police talk to witnesses after the shootings.

Boston Police report two men were critically injured in a shooting near Beach and Hudson streets around 2:30 a.m. and that two out of towners were arrested for the gunfire after proving unable to handle the rotary at Sullivan Square in Charlestown.

One resident reported hearing around a dozen shots.

Police say that officers responding to reports of the shootings got witness descriptions of a car spotted fleeing the scene, which other officers soon spotted at Atlantic Avenue and Kneeland Street:

Officers maintained surveillance of the vehicle, and requested additional units to the area to conduct a traffic stop. As responding officers approached the intersection, the suspect vehicle accelerated, fleeing the area and refusing to stop for officers. Officers observed the vehicle fail to stop at multiple red lights and continue fleeing from officers. Officer’s maintained visual contact with the suspect vehicle as it fled, continuously updating their location for responding officers from both Boston Police and Massachusetts State Police.

The vehicle fled over the North Washington Street Bridge into Charlestown, where the vehicle lost control at the Sullivan Square rotary and came to a stop in the grassy area inside the traffic circle where it flipped on its side.

Police say they removed three men from the car. All required hospitalization; two were charged with the shooting.

The third man was not charged.

There's video of it. Sixteen

There's video of it. Sixteen shots, and they got shot at pretty much point blank range. Not sure what their status is, but hopefully the victims pull through.