Police say man didn't observe coronavirus etiquette and back up in line at a Codman Square ATM, instead, he started waving a gun around 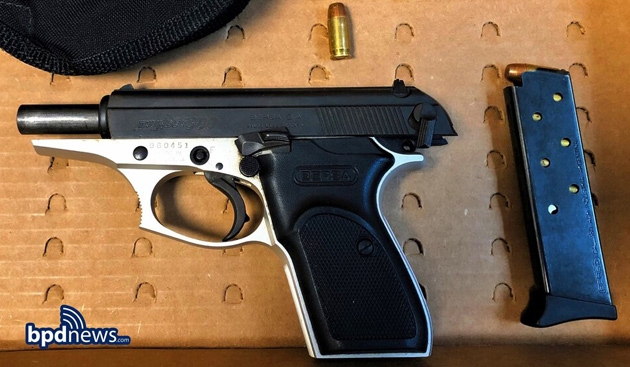 The gun in question.

Boston Police report a coronavirus-related arrest for an incident outside the Citizens Bank branch at 569 Washington St. in Codman Square this afternoon. Read more. 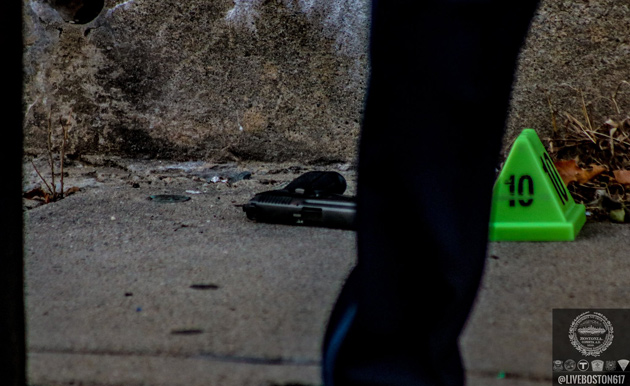 Twice in the leg, outside the KFC on Washington Street, across from Regina Road, around 6:10 p.m., Live Boston reports.

Man with stab wound repeatedly spits on EMTs; might have had something to do with also being arrested for breaking and entering, police say

Boston Police report arresting two men and a woman early this morning that they say were in a Codman Square building they had no business being in. Read more.

Teens were hanging out in the back of the Codman Square post office with loaded gun, stolen Bluebike, police say

Boston Police report arresting two teens on gun charges and a third on a charge of receiving stolen property behind the post office at 554 Washington St. Wednesday morning. Read more.

WBZ interviews the owner of Billy’s Texas BBQ and Pizza, 530 Washington St., after it was hit with at least 19 bullets in gunfire that left left two men shot Sunday evening.

The Dorchester Reporter reports the Boston Licensing Board has denied the chain's request for a food-serving license for its proposed Codman Square outlet "with prejudice" after hearing from residents that the square already has more than enough greasy, fatty food in the form of McDonald's and KFC. The vote means Popeyes will have to wait at least a year before reapplying for a license there.

Board ensures Dorchester won't have too many Dollar Tree stores

Correction: Denial without prejudice means the landlord doesn't have to wait a year to re-apply.

The Zoning Board of Appeal yesterday rejected a Dollar Tree store proposed for 493 Washington St. in Codman Square after aides to Mayor Walsh and City Councilor Andrea Campbell said that it could cause traffic problems and, besides, there's already a Dollar Tree a mile away on Talbot Avenue. Read more. 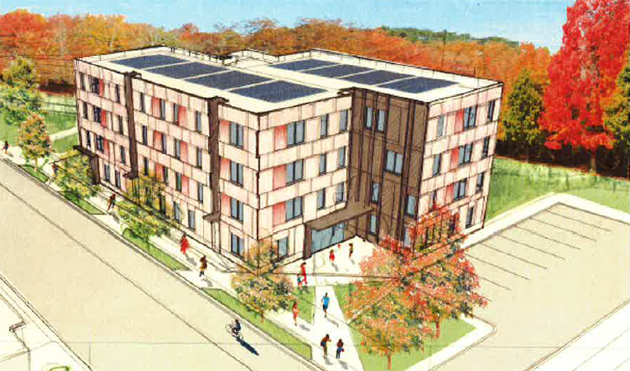 Architect's rendering of building after white hipsters move in.

A developer has proposed replacing a former nursing home on Aspinwall Road in Dorchester's Codman Square with a four-story, 34-unit condo building that would have 29 parking spaces in an underground garage. Read more.

Man stabbed to death on Tremlett Street in Dorchester

Dorchester teen arrested for Codman Square bank robbery after he agrees to turns himself in, police say

Boston Police have released photos of a guy in a hoodie who held up the East Boston Savings Bank branch at 305 Talbot Ave. in Dorchester around 10:50 a.m. on Wednesday. Read more.

Boston Police report this time they're sure they have the man who murdered Jose Luis Phinn Williams as he worked at a Codman Square gas station on Oct. 5. Read more.

Two shot in Dorchester, one dead

Boston Police report two men were shot shortly after 5 p.m. at 49 Withington St. in Codman Square. Both were taken to local hospitals, where one died and the other is expected to survive. Police recovered a gun at the scene.

Man shot to death in Dorchester, found outside hall where residents, officials were discussing public safety

A man was fatally shot in the head as he sat in a car on Norwell Street, near Washington Street around 7:10 p.m., according to NBC Boston.

However, PCFN reports police found his body, still in the car, about a mile away, at Talbot Avenue and Norfolk Street. This was right outside the Great Hall, where the Louis D. Brown Peace Institute and City Council President Andrea Campbell were leading "a community conversation on public safety issues" in Campbell's district. Read more.

The Suffolk County District Attorney's office has filed paperwork to end the prosecution of Kevin Williams for the murder of Jose Williams at a Washington Street gas station last month. Read more.

Markets urged to keep an eye on people buying economy-sized cans of Natty Ice at 9:05 in the morning

The Boston Licensing Board decides Thursday whether Alex's Market, 322 Talbot Ave. in Dorchester, deserves any punishment for the way a customer walked out of the store and immediately popped open one of the 25-oz. Natural Ice cans he'd just purchased and guzzled some down - and then handed another one to an acquaintance. Read more.