One dead, two injured in crash on ramp from Sumner Tunnel to Storrow Drive

State Police report a Northampton man, 24, died in a single-vehicle crash on the ramp from the Sumner Tunnel to Storrow Drive around 3:20 a.m.

His two passengers, 22 and 18, were taken to nearby Massachusetts General Hospital with serious injuries, State Police say. The cause of the crash remains under investigation.

There's no rule that says you can't storrow underground 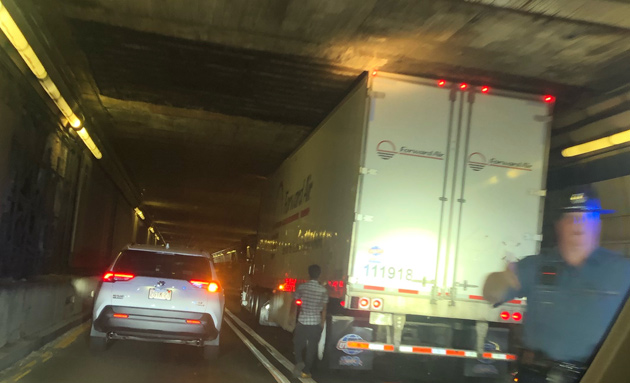 Kevin the roving UHub photographer was forced to stop roving due to an 18-wheeler that ground to a halt after entering the Sumner Tunnel this evening. State Police reported one lane was shut around 6:30 p.m., but that the truck was removed and the lane re-opened shortly before 9 p.m.

Storrowing usually involves bridges, but nothing says it can't happen in a tunnel 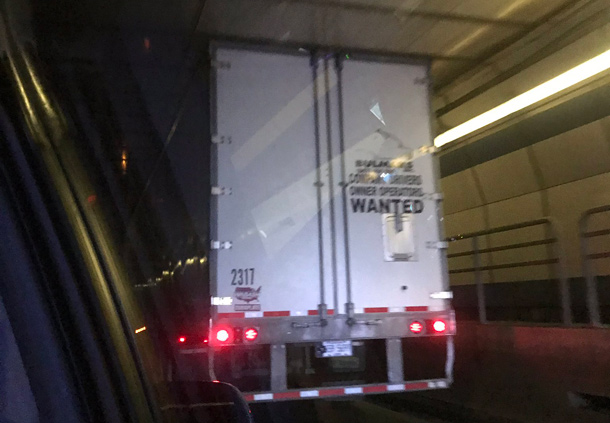 Danielle Johns had no choice but to gaze upon this stuck truck in the Sumner Tunnel shortly before noon:

Heading from airport into Boston so might want to find another route. Traffic waaay backed up.

A neighborhood in gridlock: Sumner Tunnel changes leave East Boston drivers with plenty of time to ponder mortality and stuff

Saratoga Street, just past Brooks, this morning. From this 311 complaint.

More than a year ago, state transportation planners showed off their plans to ease congestion at the entrance to the Sumner Tunnel after the toll plaza was removed, and promised residents would soon see relief.

Whatever they did, didn't work, residents say. Read more.

State transportation officials tonight detailed their latest plans to ease the traffic woes that have beset East Boston since the Sumner Tunnel toll plaza came down in May and was replaced by a new configuration of roadways, but skeptical residents were having none of it. Read more.

State Rep. Adrian Madaro (D-East Boston) is pissed off at the way his neighborhood's roads have become gridlocked after MassDOT removed the Sumner Tunnel toll plaza and modified the approaches to it a couple weeks ago.

In a letter to state Transportation Secretary Stephanie Pollack, he writes that rather than the "safer, smoother and more efficient commute" promised by MassDOT: Read more.

MassDOT shows us some heavy equipment making a nice snack of the old Sumner Tunnel toll booths, which became obsolete when the state turned on its next-gen E-Z Pass scanner system.

State Police report a pickup that went out of control around 3:10 a.m. on the ramp from the Sumner Tunnel to I-93 north crashed, killing one man and sending two other men to the hospital.

State Police say they are still investigating why the vehicle went out of control.

The fire wasn't all that big, but the Sumner was still shut to let a tow truck pull the flame-broiled bus out

Shortly before 7:30 p.m. , on the airport side. State Police reports the fire was quickly put out and there were no injuries. The tunnel was re-opened around 7:40 p.m.

Matt Karolian has some traffic photos.

No movement. Police, fire and EMS trying to make their way to the vehicle(s).

The driver of a car that hit barriers and the tunnel wall at the Government Center onramp died in the 3:30 a.m. crash, the Suffolk County District Attorney's office reports. She was 33 and a Dorchester resident.

Preliminary evidence suggests the vehicle struck a concrete attenuator that splits the lane, then collided with the tunnel wall. Multiple civilian motorists stopped at the scene in an attempt to render assistance. The operator, however, was killed in the crash. Her passengers, all adults from Boston, were transported to area hospitals with injuries seemed not life-threatening.

State Police report an "overheight" truck tried to get into the Sumner Tunnel in East Boston around 11:15 a.m. but didn't get far after causing some damage to the tunnel roof and shutting one lane.

The truck that struck the ceiling is a 2008 Freightliner owned by McCoy National Lease Inc. of Green Bay, Wisconsin. It was towing a trailer owned by Primestar Trucking LLC of Postville, Iowa. The overhead strike was observed on camera by Massachusetts Department of Transportation Highway Operations Center personnel, who notified State Police Troop E personnel, allowing for an immediate response.

Boston Police are swarming the area around the Sumner Tunnel and East Boston's Central Square, looking for four men - one reported covered in blood - for a savage attack near the toll plaza around 1:30 p.m.

Woman killed in Sumner crash was from Roslindale

The Suffolk County District Attorney's office reports that Sharlene Bauptista, 34, of Roslindale, died in the crash around 1:30 a.m. on Sunday.

Her two companions in the car, Amaurys Obijo and Jose Baez, both 25 and both also from Roslindale, remain in serious condition at local hospitals. State troopers continue to investigate the crash, the DA's office says.

One killed, two injured when car careens out of control in Sumner Tunnel

Around 1:20 a.m. today, Channel 5 reports, adding none was wearing a seat belt.

The Outraged Liberal considers a possible real motive behind the humongous toll increases approved by the turnpike authority yesterday: Put pressure on the legislature to increase the gas tax.

He notes the tolls don't take effect until February or March, and not until after a public hearing (where will they hold that? Gillette Stadium?).

... Presumably, that would be enough time for Deval Patrick and legislators to get off their, um, sidelines, and approve a comprehensive plan to tackle the transportation nightmare (hey, throw in the disaster known as the MBTA while you are at it.) ...

Dan Kennedy on the turnpike authority: What, are they insane?

Jay Fitzgerald predicts we'll wind up with a toll increase, a gas-tax hike and the transfer of turnpike "hacks" to a new state authority. He uses a classic cartoon to illustrate how he feels this morning.