Rudolph with your butt so bright, won't you guide my sleigh tonight? Image by MIT News.

MIT News reports researchers have developed low-cost wetness sensors that can be embedded in diapers to sound a clarion call when baby needs a new diaper. Read more.

Lawrence Lessig, a Harvard Law School professor and Brookline resident, charges the New York Times committed "clickbait defamation" in a headline and lead paragraph that made it sound he was condoning MIT professors and administrators taking money from convicted sex offender Jeffrey Epstein when, he says, he wasn't. Read more.

Some at MIT gladly prostrated themselves to Jeffrey Epstein on theory money from bad people can be put to good use, report finds

Some MIT researchers and officials caused "significant harm" to the school by taking money from Jeffrey Epstein and arranging frequent campus visits for him even after his conviction for procuring an underage prostitute, despite repeated warnings from people on campus who knew better and who told them, as late as 2017, to stop it, a law firm hired by the school to look at its Epstein connections concludes. Read more.

The Zoning Board of Appeal today rejected a proposed new roof deck as part of an overall rehab of a Beacon Street frat house after a neighbor worried about noise and the neighborhood association groused about the dangerous precedent the deck could set. Read more.

Jeffrey Epstein not the MIT Media Lab's only problem

WBUR reports state environmental officials are looking into allegations that the lab dumped polluted wastewater into a well in Middleton as part of its attempts to build "food computers," a program already under fire for other reasons, such as that the "computers" didn't work.

The Free Software Foundation announced tonight that Richard Stallman has resigned as its president and a member of the board of the group - which he started in 1985. Read more. Protesters call on MIT president to resign over Epstein. Photo by Greg Cook.

Richard Stallman, founder of Cambridge's Free Software Foundation and a visiting scientist at MIT, argues that Jeffrey Epstein's victims were likely "entirely willing" and to stop besmirching the good name of deceased MIT AI guru Marvin Minsky just because he might have "had sex with one of Epstein’s harem." Read more.

A review by an outside law firm of MIT's ties with disgraced, convicted sex offender Jeffrey Epstein turned up a letter thanking him for a contribution signed by the school's president, L. Rafael Rief. Read more.

Report: MIT's Media Lab had much deeper ties with pedophile Jeffrey Epstein than it let on

The New Yorker reports the Media Lab relied heavily on disgraced and now dead molester Jeffrey Epstein that went far beyond the $800,000 in donations MIT acknowledges it received from him.

MIT President L. Rafael Reif made the pledge today in an open letter to the MIT community after two days of publicity about professors leaving the MIT Media Lab in disgust over the money - and shmoozing - it accepted from the now dead convicted sex offender. Read more.

Berkeley not very genial with Harvard, MIT over biotech patents

The Harvard Crimson has the details in the dispute over who discovered a particular gene-changing technique first; Berkeley is using words like "pattern of deception" and "cherry-picked data" in a complaint filed with the US Patent and Trademark Office. Harvard and MIT volleys back with words like "baseless."

Hipster complains to local magazine that used his photo to show how hipsters all look alike, only it wasn't actually him

Gideon Litchfield, editor in chief of MIT Technology Review, recounts how the other day, they got an angry message from some guy about how they'd used his photo to illustrate an article about research at Brandeis that tried to explain "the hipster effect" - how non-conformists often wind up looking the same. Read more.

Hard partying MIT frat discovers it's in Boston and has to obey city rules on things like underage drinking, occupancy limits and vaping indoors

An MIT fraternity in Kenmore Square found itself hauled before the Boston Licensing Board today to face police citations for allowing underage drinking and vaping at a party in which way more people were stuffed into the building than allowed by its Boston-issued licenses. Read more.

For the past couple of days, somebody has been sending vast amounts of "malicious" e-mail to people with MIT e-mail accounts, bringing the system to its knees as the school tries to block the problem. Read more.

MIT researchers build plane that flies with no moving parts

Researchers at MIT have developed a small plane that uses ions to fly: Read more.

A core mission at MIT

MIT takes us on a tour of its nuclear reactor, conveniently located just off Mass. Ave.

State Police report they and MIT Police are trying to figure out who sprayed several rounds in the area of the Phi Beta Epsilon building, 400 Memorial Drive, sometime before 10 a.m on Tuesday. Read more. 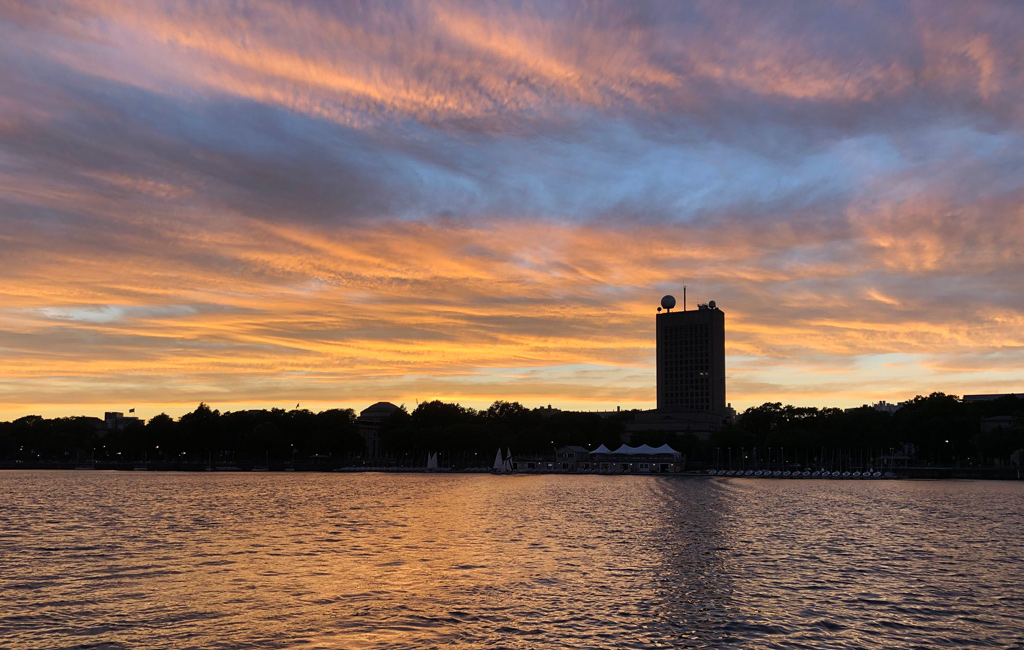 Caitlin loved the sunset this evening:

The storms have taken the heat and humidity and left us another amazing sunset.

Across the river, Chris Wagner also enjoyed the sunset in Allston: Read more.

Man, they have really big heads at MIT

Woman awakens in MIT frat to man touching her leg

WBZ reports on the incident at Phi Kappa Theta, 229 Commonwealth Ave. in the Back Bay early Sunday. It's at least the third reported attack at an MIT fraternity house over the past month, NBC Boston reports.