Live Boston reports that around 5:30 this morning, a cab driver walked into the D-14 police station in Brighton with a freshly opened forehead, which she said she got minutes before when he arrived at 28 Jette Way in the Fidelis Way development to pick up a woman, who got in bearing a hammer and a buthcer knife and then used the sharper implement to try to carve open her head. The suspect then ran away. The driver is expected to recover.

Transit Police report arresting an East Boston man at the Braintree Red Line station who, they charge, punched a cabbie to the ground and then repeatedly kicked him in the head after the driver told him he could not take him anywhere because he was at the station to pick somebody up. Read more.

Taxi driver to face charges for holding onto $13,000 flute a passenger left in his cab in 2012

Boston Police report recovering an expensive flute that had gone missing in 2012 after, they say, the cab driver that day showed up at a local musical-instrument store in February to inquire as to how much it might be worth. Read more.

The Boston City Council agreed today to see if there's anything in the city's taxi regulations they can change that would put the shrinking number of medallion owners on a more equal footing with Uber and Lyft drivers and let them continue driving the streets. Read more.

Boston Police report gang-unit officers arrested the guy in the back seat of a cab they'd stopped at Talbot Avenue and Nightingale Street in Dorchester around 4:10 p.m. on Tuesday. Read more.

State Police report arresting Nicholas Franco of Newton, whom they say got out of his car and attacked the driver of a cab behind him, at Jeffries Street and Transportation Way around 9:10 a.m. on Friday. Read more.

That must be some fare 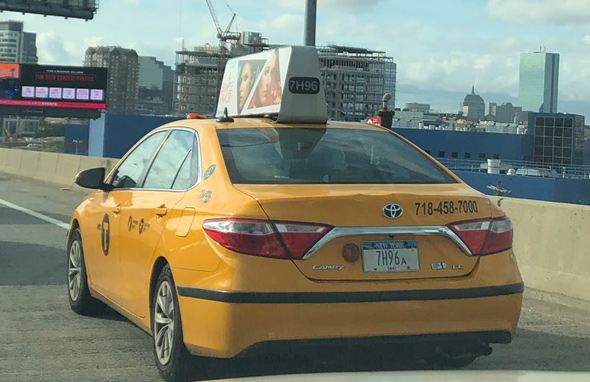 HD spotted this New York cab tooling around our fair Hub this morning, wonders what the fare was (if it were on the meter, it'd be roughly $544 one way, but fares have to be negoiated past Westchester).

Cambridge Police report issuing tickets to three Boston cabbies spotted picking up fares in Harvard and Porter squares yesterday afternoon and evening. Police say it's part of a crackdown on non-Cambridge taxi drivers trying to steal business away from the locals.

Taxi driver who plowed into ten other drivers has taxi license revoked, could face a criminal charge

State Police report they have suspended Lutant Clenford's taxi license for an incident Monday in which he drove into other drivers outside a Logan Airport taxi-waiting area. Read more.

State Police report ten people were injured, some seriously, when a cab driver drove into them outside the taxi-pool building at Logan Airport around 1:40 p.m. Read more.

Andrea watched a Boston Cab driver hop onto the sidewalk to get around the Sunday ban on cars down Mem. Drive.

The owners of 462 Boston medallion cabs yesterday sued Uber for what they say are the profits Uber cost them through unfair competition over a five-year period.

The suit comes days after a federal judge dismissed a lawsuit by an association of Boston medallion owners against the state's new regulations that allow Uber, Lyft and other "transportation network companies" to operate. Read more.

In his ruling today, US District Court Judge Nathaniel Gorton said the Cambridge owners no longer had any standing to sue Cambridge over the way it did or did not regulate companies such as Lyft and Uber because a new state law removes oversight of the companies from local licensing officials.

Judge: Nothing wrong with state laws that allow Uber and Lyft to operate

A federal judge today dismissed a lawsuit by Boston cab owners against state rules that let "transportation network companies" such as Lyft and Uber carry passengers to and from Boston destinations. Read more.

Boston travel tip: Don't book a flight into Logan that gets in late on a holiday

A disgruntled Aaron Rosenberg shows us a cab line at Logan at 12:45 this morning.

"Glad we banned uber...thanks," he writes. Logan has banned UberX and Uber Pool, unless the drivers register their cars as livery.

A federal judge today dismissed a lawsuit by the Boston Taxi Owners Association against the city of Boston because a new state law bars the city from regulating "transportation network companies" such as Uber and Lyft. Read more.

Edward Tutunjian was sentenced today to 20 months of probation - 18 of which he has to spend in Coolidge House in Boston, for payroll tax evasion, employing illegal aliens and for failing to pay overtime wages, the US Attorney's office reports.

Tutunjian pleaded guilty in August to the charges related to his operation of Boston's largest taxi fleet.

The Globe reports Police Commissioner William Evans is reconsidering his initial decision to let Edward Tutunjian transfer his taxi medallions to his family before pleading guilty to tax evasion.

Edward Tutunjian, one of the largest owners of Boston cab medallions, agreed to plead guilty to payroll tax evasion, employing illegal aliens and failing to pay overtime wages today and agreed to pay more than $2.3 million in fines and restitution, the US Attorney's office reports. Read more.

Honest cabby turns in backpack stuffed with $187,000 in cash to police, who reunite it with owner

Boston Police report that when a man who got into a cab at Mass. Ave. and Tremont Street Friday afternoon left his backpack behind, the driver opened it up to see if there was any ID inside.