La Taqueria of Roslindale plans to open an outlet in Dedham on Monday, next to the uBreakiFix on Washington Street at the rotary with Boston Providence Highway. That's just up the street from El Centro and a couple blocks away from Pancho's Taqueria on High Street.

This will be La Taqueria's second outlet. 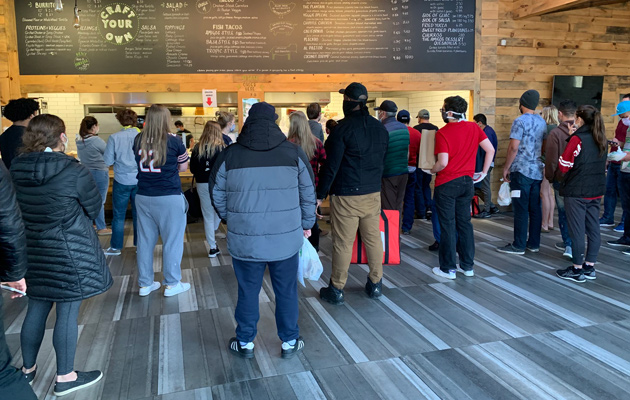 Around 7:40 p.m., Jeffbax checked in from the Los Amigos Taqueria in Brighton Center:

Attempting to pick up some Mexican food on Cinco de Mayo might have been one of my all-time worst ideas. Complete chaos over at Los Amigos in Brighton… Immediately ditched my order seeing this scene and hearing someone say they were waiting an hour.

The City that Always Sleeps wakes up briefly, shoots down the idea of late-night tacos, goes back to bed

The Boston Licensing Board today approved a taqueria in an Emerson College dorm on Boylston Street - but with the midnight closing time sought by the local neighborhood group, which was worried what would happen to all the freshmen in the dorm if they could get tacos after midnight - as opposed to pizza, which they can get across the street even after the neighborhood's sidewalks are rolled up. Read more.

The City that Always Sleeps: Think of the children, downtown residents group cries in battle against late-night tacos 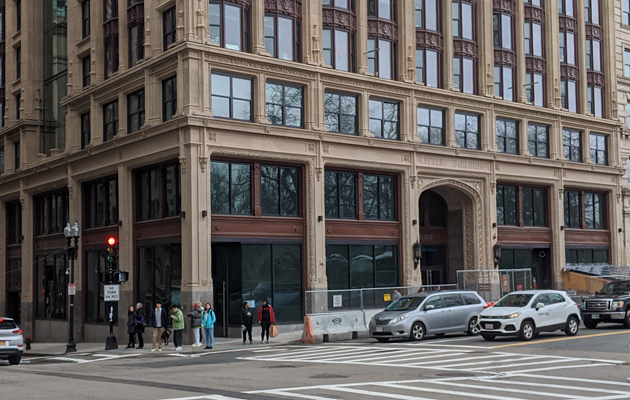 Risky business? Taqueria would be on the right side of the building along Boylston.

The Boston Licensing Board could vote tomorrow whether to let a proposed taqueria in Emerson College's revamped Little Building stay open until 2 a.m. or whether to back a neighborhood association, the mayor and the local city councilor, who say a midnight closing would protect area students and residents from dangerous knockabouts drawn like moths to late-night Mexican food. Read more.

You don't have to eat at Chipotle, you know

Even in a cold northern town like ours, there are plenty of alternatives for your burrito fix rather than at a chain that was just fined $1.4 million for "an estimated 13,253 child labor violations and other state wage and hour law violations" at its 50 corporate-owned outlets in Massachusetts.

Emerson College announced today that a bakery and a taqueria will be moving into space in its newly renovated Little Building at Boylston and Tremont streets, and that it is currently negotiating leases with an Asian noodle place and a juice bar for the building. Read more.

Hey Boston I'm hoping to make to make tamales this holiday season. Does anyone know where a Tejana can find some fresh masa?

Finally, that Middle Eastern/Mexican fusion you've been hankering for

Falafel King on Tremont Street downtown will soon be sharing space with Taccos Arabas, which will offer such dishes as shawarma tacos, Boston Restaurant Talk reports. 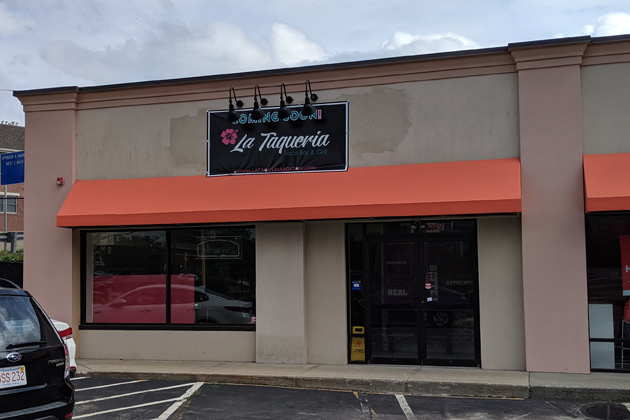 La Taqueria Taco Bar and Grill, open for a couple years now at Hyde Park Avenue and Canterbury Street in Roslindale, hopes to open a second outlet on Washington Street in Dedham, at the rotary with Providence Highway - next to UBreakIFix.

Managers at Bodega Canal, 69 Canal St., told the Boston Licensing Board this morning they've removed CBD-infused items - which included chorizo, guacamole and cocktails - from their menu following a visit from a BPD licensing detective. Read more.

The Swellesley Report reports the death of Mike Kamio, the founder of the well known local chain and father of three.

Roslindale Village Main Street reports that the JP-based Chilacates will be opening its latest outlet in the Washington Street space vacated by Redd's in Rozzie and Tony's Market. Read more.

Boston Restaurant Talk reports the venerable Our House East on Gainsborough Street in the Fenway has new owners, who plan to replace it with two restaurants, one a "chic, bordello-evoking taco bar."

Margaret Pimentel is all set to open her Achilitos Taqueria, in the new building at 38 Hyde Park Ave., where YMAA used to be, but both the mayor's office and the Jamaica Plain Neighborhood Council asked the Boston Licensing Board today to defer action on her request for a food-serving license until after she can meet with the council to discuss her proposal. Read more.

Boston Restaurant Talk reports Sunset Grill and Tap on Brighton Avenue has said adios to customers and closed its doors for good.

Good news for ampersand fans who like to dine out

Boston Restaurant Talk reports that Back Bay Harry's is going to close and turn into something called Citrus & Salt, which apparently will be a Mexican version of Buttermilk & Bourbon, which, of course, is a Southern version of Emack & Bolio, which is the ice-cream version of Myers + Chang, which is the Chinese version of Smith & Wollensky, which is the steak version of Crimson and Clover, which was Tommy James and the Shondells's big hit in 1968.

Arlington Police are praising a local 6-year-old whom they say found and turned in a bag containing $2,000 in cash and deposit slips from a local chain of Mexican restaurants. Read more.

The Boston Licensing Board decides Thursday whether to let Nicholas Frattaroli - of the North End Frattarolis - buy the liquor license from the owners of the shuttered Grand Canal and re-open it as a Mexican restaurant called Bodega Canal. Read more.