"Speed is believed to be a contributing factor" in the crash, in which Joseph Fournier, 18, of Burlington died around 1:40 a.m., State Police say.

StreetsblogMass reports MassDOT announced today that it will be replacing the current elevated loop system where the Allston/Cambridge tolls used to be on the turnpike and the neighboring stretch of Soldiers Field Road with a $1.7-billion ground-level set of roads.

Dumb and dumber: The original truthers decide to protest on 9/10 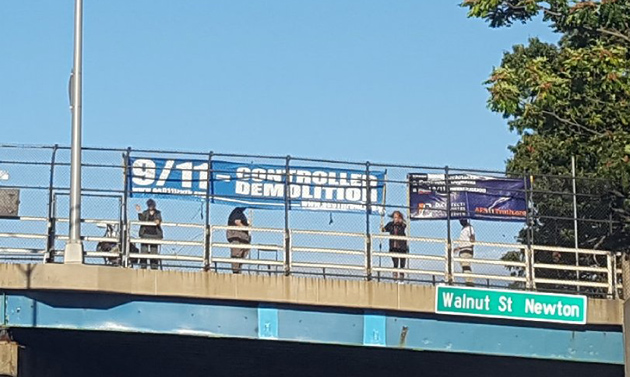 Claire Sadar reports 9/11 truthers held banners over the turnpike at two locations in the Newton/Watertown area and bollixed traffic in Newton Corner during rush hour by deciding to hand out literature to motorists there about how jet fuel can't melt steel or something.

Chaos under the Pru: Eight vehicles in two smashups, one on fire

The Boston Fire Department reports that around 3:45 p.m., firefighters responded to a report of a car fire on the turnpike in the Pru tunnel - which sent smoke into the first floor of Copley Place - and found the flaming car and two separate crashes, one involving six cars, the other two cars.

State Police report a teenager lost control of his car on the turnpike westbound near where Allston the tolls used to be, hitting a tractor-trailer stopped due to a malfunction and squashing its driver, who had gotten out to try to figure out the problem: Read more.

Car window shot out on turnpike in Boston

State Police have detained a man in Westboro as they investigate an incident on the Massachusetts Turnpike in Boston around 6:20 p.m. in which a motorist had one of her windows shot out. Read more. 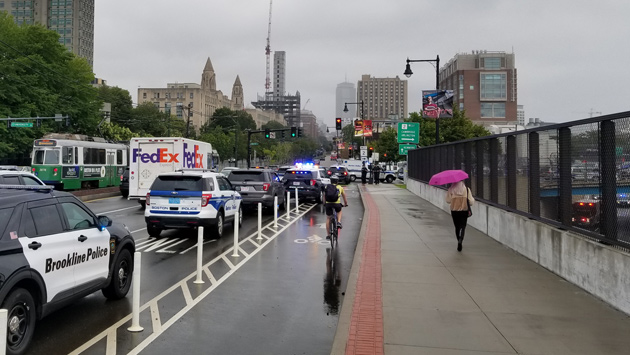 Some of the emergency vehicles at the scene. Photo by We Paint the World.

State Police report a woman jumped off the Carlton Street overpass onto the outbound turnpike around 6:05 p.m.

Troopers and other first responders rushed to the scene and undertook emergency medical aid in an attempt to save her life. She sustained serious life-threatening injuries and has been transported to Tufts Medical Center. 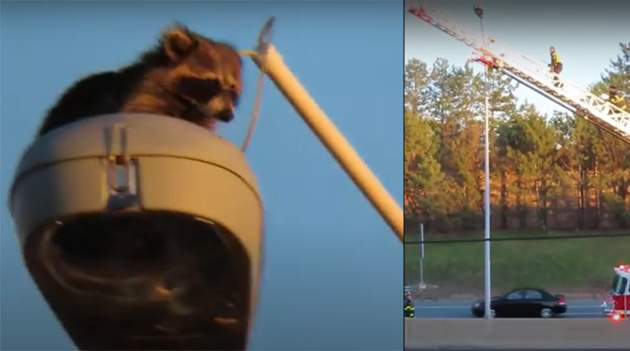 Ari Herzog could only watch in amazement this evening as Newton firefighters used a ladder truck, a thin lasso and a box to rescue a raccoon that had somehow survived crossing the turnpike and then climbed up the top of a light fixture sprouting from the Jersey barriers that separate the two sides of the highway.

With snow season over, it's time for brush-fire season

KTC shows us the brush fire on the side of the turnpike outbound this afternoon:

SUV goes up in flames on the turnpike in Newton 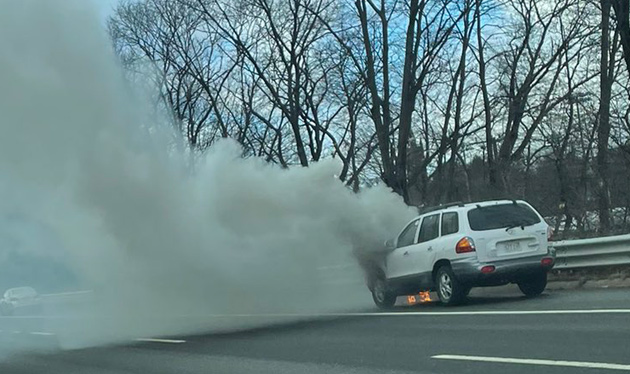 Hannah Armstrong captured the flaming SUV on the Massachusetts Turnpike westbound, just before Exit 17 in Newton Corner, shortly after 1 p.m. today. State Police report no injuries and that Newton and Boston firefighters doused the flames.

Dorchester woman settles doubts whether you can get a Corolla up to 100 m.p.h., State Police say

State Police report a Dorchester woman faces a variety of charges after getting her econobox to accelerate past 100 m.p.h. on the turnpike today before flipping it over on the exit ramp to Rte. 9 in Framingham. Read more.

Yes, we have no bananas: Harry Chapin song plays out on turnpike in Allston 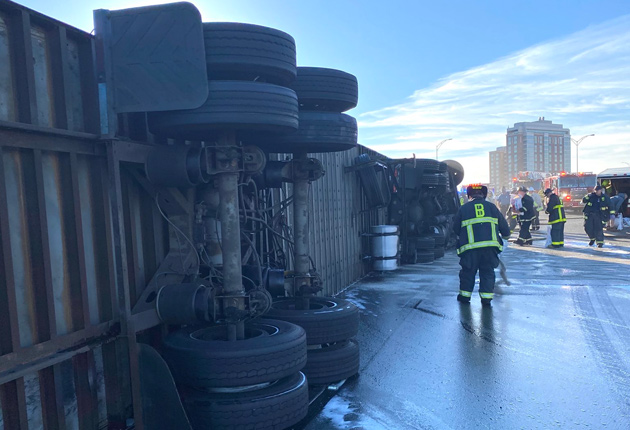 State Police report a truck carrying a load of bananas overturned on the inbound side of the Massachusetts Turnpike in Allston, near where the toll plaza used to be, shortly after 8 a.m. Read more.

Truck flips on its side on the turnpike in Allston

Bradley had plenty of time to observe a truck flipped on its side on the inbound turnpike near the Allston onramp shortly before 3 p.m. He noticed the driver appeared to have gotten out OK. 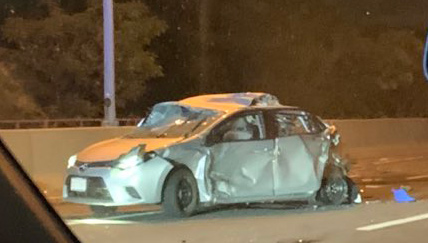 A now ex-car. Photo by Spin.

Several vehicles, including an 18-wheeler, got entangled tonight on the Massachusetts Turnpike inbound near the IHOP in Brighton. Read more. 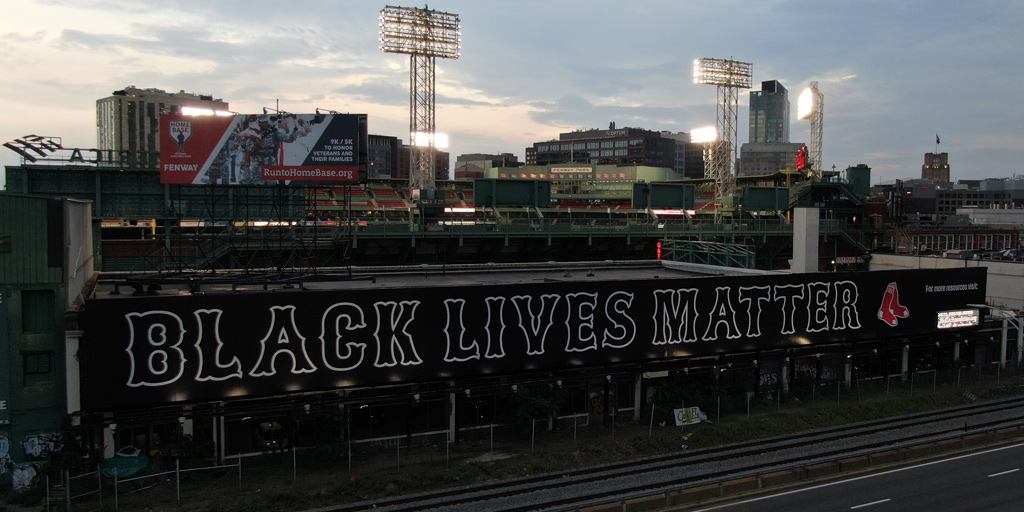 Drew shows us the new message the Red Sox put up alongside the Massachusetts Turnpike in the Fenway.

CommonWealth reports MassDOT is looking at a new alternative for rebuilding the turnpike while maintaining train lines, Soldiers Field Road and bike and pedestrian paths in a space just 204 feet wide just past where the Allston/Cambridge tolls used to be. Read more. 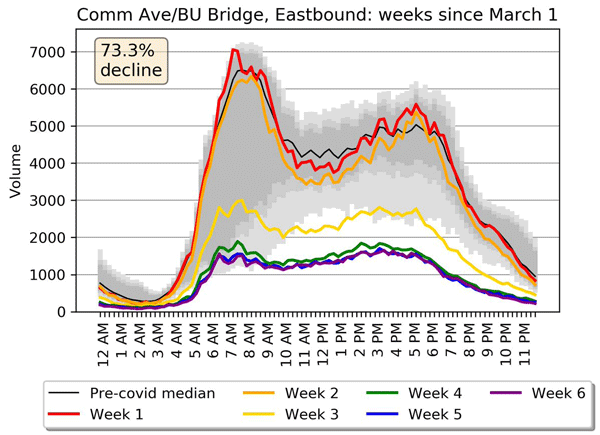 Ari Ofesevit has been looking at the latest Massachusetts Turnpike traffic data (courtesy those toll gantry thingees) and while it's not surprising that people are simply driving a lot less on the highway in the Boston area in these Covid-19 days, it's still kind of amazing to see - and raises some questions about MassDOT toll revenue.

State Police report that Stephen Salazar, 32, of Jamaica Plain, died at the Allston/Cambridge offramp from the Massachusetts Turnpike around 2:45 p.m. on Wednesday. Read more.

WFXT reports state officials might have to push back a planned 2022 start for a ten-year program to replace the current Allston/Cambridge turnpike interchange because of mounting opposition to a proposal to build a bridge over the Charles while the work is being done.

People living near the "temporary" Forest Hills T bus depot could probably speak to how temporary "temporary" is around here.

PSA: The turnpike is in bad shape