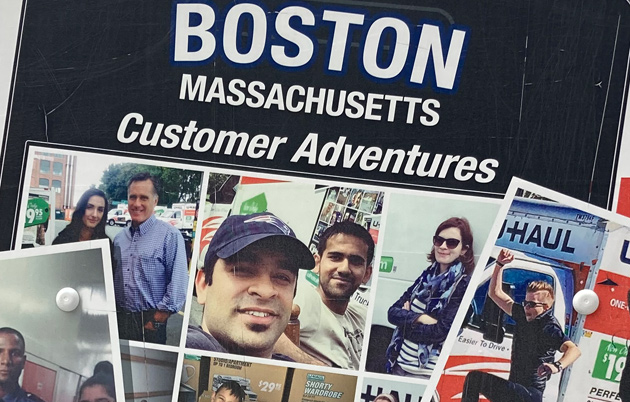 Adam Castiglioni reports his neighbor rented a U-Haul that promised Boston excitement on the side. Take a close look at the customer on an adventure on the left. Can't keep him away, we guess.

CNN reports Mitt Romney had to spend some time in one of our finer local hospitals after he lost consciousness from hitting his head during a fall. Romney declined to say just what he was doing that led to the fall, and CNN did not specify where, exactly, he fell.

It's Romney vs. Kennedy for US Senate - again

What is it they say about history repeating as farce? CNN reports a Utah Republican Party convention today denied Mitt Romney the coronation he wanted and so he's going to have to run for the Senate in a primary in June against a guy named Kennedy, only this is Utah we're talking about, so we doubt the Mittster's going to run as the best friend the gays could ever want.

Brown didn't win a seat in the Senate after he left Massachusetts, but Romney might have better luck.

Oh, Mitt, what are we going to do with you?

Via @hypervocal Why oh why did Mitt Romney pose for this picture. twitpic.com/8glbi8

For once, Boston cab drivers were right

Sometimes, Boston's cab drivers are telling the truth; the credit card machines don't work - and it's not their fault.

According to (Boston's own) Charles Pierce of Esquire, the Romney for President campaign shut off staffers' credit cards in the middle of the night on Tuesday, leaving the Boston crew scrambling for money.

Mitt Romney and his Education Legacy in MA

During the final presidential debate, Romney boasted that MA is a leader in education and number one in the country.

It is true that MA is the birthplace of public education, something Romney would gladly claim if he could. Our schools also receive one of the highest rates of funding from the federal government and spends more per student than other states. As such, our schools were number one before Mitt and after. One of the main reasons for MA’s success was its investment in early chilhood education, which Romney cut as soon as he became Governor.
In addition, something that Mitt did not claim but happened on his watch was the Unz initiative, which made bilingual education illegal and widened the opportunity Gap.

Our little place in the debate

Massachusetts sure came up a lot in the debate tonight. Some history to go with the references:

When Romney got his binder full of women (and why he had nothing to do with it).

Who is Crazy Khazei?

Romney/Ryan: Reducing the deficit, one 65 year old at a time. #p2 @maddow @mittromney

Rally against Romney today at State House @11am

Want Governor Romney back? We didn't think so.

Voters in Massachusetts know better than anyone else what a Romney presidency would look like—and we need to let the rest of the country know how terrible it would be.

That's why we're joining with other Massachusetts progressive groups TODAY for a rally to show that Romney was a failure as governor and we certainly don't want him in charge of the country.

Can you join us THIS MORNING at 11:15 on the steps of the State House on Beacon Street to stand up and say that Mitt Romney was wrong for Massachusetts and he is wrong for America?

Mitt Romney is giving Massachusetts and Republicans a bad name

Mitt v. Mitt, The story of two men trapped in one body.

As Mitt Romney has taken to the national public stage as a contender for the Republican presidential nomination, Deval Patrick's administration has been asked many times to provide e-mails from Romney's time as governor. The catch: they can't find any to hand out.

Then a 14 year old teenager, Lisa Allen came forward Wednesday to tell her side of the story when Republican candidate for US Congress former police officer Sgt Jeff Perry, failed to protect Ms. Allen from Officer Scott Flanagan who performed an illegal strip-search of her. Police officers are entrusted to, and take an oath to, serve and protect. Ms. Allen said Officer Perry protected Officer Flanagan but not her. Ms Allen went further and said Perry "should not be in a position of power."

And now the rest of the story: Mitt vs. the rapper

Guy who's supposedly a rap star (Ed. note: What the hell do I know?) reveals he was the guy in the tete-a-Mitt on that plane, and says Romney grabbed him first.

Guy objected to Mitt telling him to put his seat upright for takeoff. In economy. No, it wasn't Kevin Smith.