Sportsball team runs up score against opponent; Shaughnessy is outraged, no?

It's ancient history by now, of course, but way back in June, Tomato Can Dan got his knickers in a bunch when an American team ran up the score against an opponent. That's just not fair, and it's so unseemly, he thundered about the US women's soccer team. This morning, Rev. Laura Everett wonders: Read more.

Tomato Can Dan whines about women

Yesterday, Dan Shaughnessy doubled down on his tomato canning to get on his high horse (or as Dan Shaughnessy Watch put it, get on his Shetland pony) to bitch about women athletes daring to celebrate a blowout win in the World Cup soccer competition. Read more.

What a difference a few weeks makes 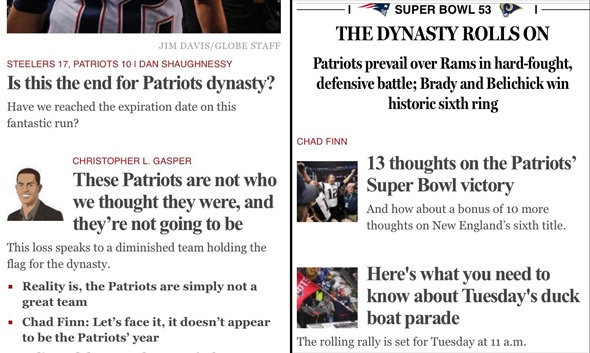 The Sports Guy gets under Tomato Can Boy's skin

Dan Shaughnessy Watch has the blow-by-blow in which Bill Simmons irritated the pearl that is Dan Shaughnessy, and all without mentioning him specifically.

How many cans of tomatoes does Dan Shaughnessy have in his pantry?

It just wouldn't be a Shaughnessy column without them.

Shaughnessy sure does love him some tomato cans. He mentions them every chance he can, like in his no doubt intensively researched, carefully crafted column today: Read more.

Dan Shaughnessy dives deeper into the tomato can of his soul

If you're one of those people who just can't quit Shaughnessy, you might be thinking he's using the phrase "tomato can" a lot more these days. You might even think he's getting carried away with it and maybe should find another way to say "loser."

UConn coach to Shank: Nobody's putting a gun to your head, so don't watch

Aw, how cute: Danny has a curse again

Dan Shaughnessy Watch notes Shank has a new Curse cliche, maybe one he can turn into another book.

Globe: Oops, we have no proof the Sox were confiscating pro-Orsillo signs

The Globe's appended this to Dan Shaughnessy's column about Orsillo:

Clarification: Because of a reporting error, an earlier version of this story made reference to signs being confiscated at Fenway Park. The reference has been removed because the Globe could not independently verify that any signs were confiscated at the ballpark. ...

So what happened to Shaughnessy's line about the Sox confiscating pro-Orsillo signs?

Dan Kennedy tries to find out.

David Ortiz writes a long piece about the PED accusations and how they haunt him to this day. And, of course, the Globe's own Shank is right in the middle of it all:

In 2013, I came off the DL and started hot. My first 20 games I was hitting like .400. And the reporter with the red jheri curl from The Boston Globe comes into the locker room says, "You're from the Dominican. You're older. You fit the profile of a steroid user. Don’t you think you’re a prime suspect?"

We interrupt our panic for a little humor break

USA Today thinks Dan Shaughnessy is an arbiter of the Boston zeitgeist, and that we're all depressed because of Deflategate and that somehow has made us sour on the Olympics.

The other day, our local crank shook his fist at a cloud and wrote how he hates soccer. Yawn. What's interesting is the Deadspin report that chronicles how he's written pretty much the same exact column about soccer for 25 years now, right down to the part where he complains about how soccer players can't use their hands.

Dan Shaughnessy had his yearly Ortiz hategasm today, erupting in a paroxysm of disgust for the player whose fundamental evil for some reason only he is able to recognize. But he was apparently a paragraph short in his recounting of every last horrible thing David Ortiz has ever done, so he threw this in at the end:

Last, and least, the rules say you’re not supposed to use the f-bomb when you are on live television. When David Ortiz told the world, “This is our [expletive] city!,’’ we made T-shirts commemorating the phrase, and the chairman of the FCC tweeted his approval.

On the front page of the Globe today, Dan Shaughnessy whines that he deserves to be treated like a real journalist even though what he writes about doesn't really matter. With obligatory sneer at the Internet and reference to a 20-year-old movie.

Specifically, in not finding the nearest dumpster and tossing a certain Globe columnist into it headfirst after said columnist (one guess which one) accused him of taking steroids because, after all, he's old and Dominican (yes, he went there). Not linking to the column because I don't feel like giving him my two cents worth of Web traffic, but it should be easy enough to find for anybody who can log into bostonglobe.com.

Ol' Man Shaughnessy waves a broom at bloggers, demands they get offa his lawn

Boston Sports Media Watch dissects the latest column by a Globe sportswriter about how those damn kids have no respect at all, not like in his day.

That must be some woodshed Shaughnessy has

Our resident ubercrank declares he won't be happy until he can personally apply a paddle to the behinds of every single returning Red Sox player, and so buries the news about the return of Charles Steinberg.

Think Shaughnessy has come down from his high yet?

Bruce Allen examines the delight the Globe - not just Shank - took in the collapse of the Red Sox.

In his house at F'enway, dead Shaughnessy waits dreaming

Dan Shaughnessy Watch reads today's gleeful, error-riddled column so you don't have to.