The Boston Licensing Board decides tomorrow whether to grant the "pouring" licenses an existing distillery on Terminal Street in Charlestown and a proposed brewery as part of the Speedway project in Brighton need to open their doors to the public. Read more. 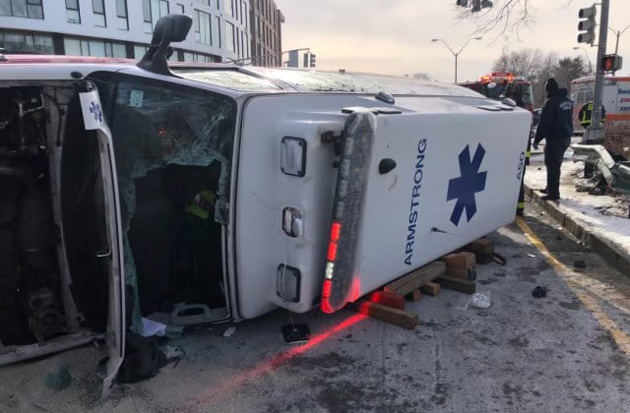 Armstrong Ambulance reports three of its workers suffered minor injuries when another vehicle crashed into an ambulance at Western Avenue and Market Street in Brighton around 1 p.m. Read more.

Developer to file plans for a 14-acre R&D complex with a hotel, apartments and a conference center on Harvard land off Western Avenue

A New York real-estate firm says it will soon file detailed plans with the BPDA for a new mixed-use development at 100 Western Ave., behind the Sanofi Genzyme plant on land that Harvard had been using as a staging area for its other construction projects on this side of the Charles, but which the school had always meant to become the core of an "enterprise research campus." Read more. 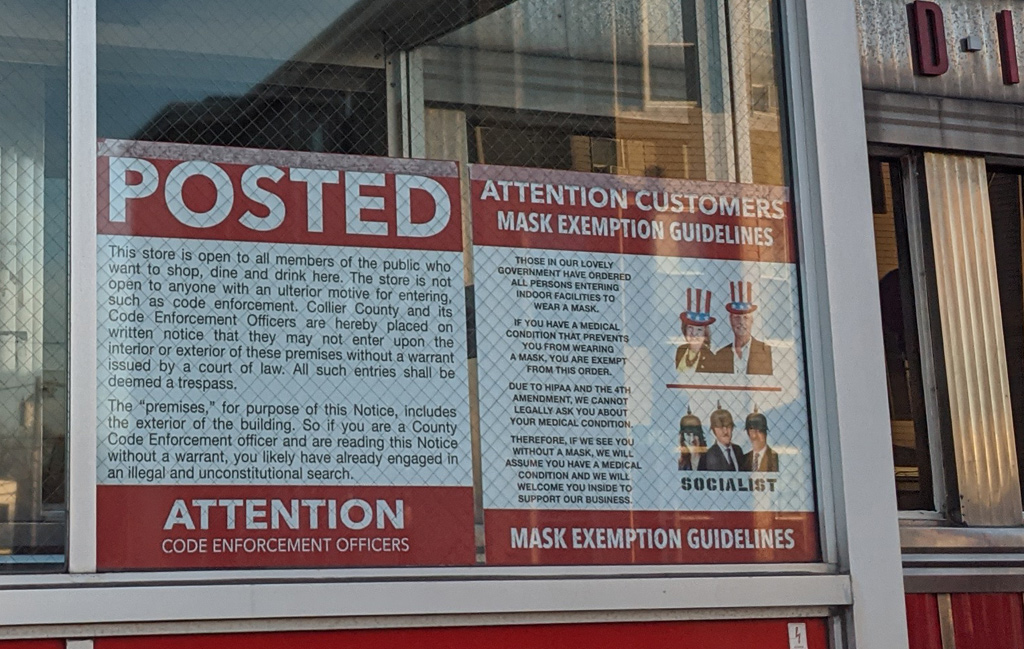 A roving UHub photographer spotted two large signs in a front window at the Breakfast Club, 270 Western Ave., yesterday that says the joint is barred by federal law from asking people who come in without a mask why, so they're going to welcome in everybody without a mask without any questions asked, no matter any so-called restrictions enacted by evil socialists in government. Read more.

Developer proposes seven-story residential building in Barry's Corner in Allston, across street from an apartment building it put up

Samuels & Associates today told the BPDA it will soon file plans for a seven-story, 270-unit residential building at 180 Western Ave., where Stone Hearth Pizza used to be, and across the street from the developer's Continuum apartment building, which includes a Trader Joe's. Read more.

Swissbakers, which closed all its Boston outlets last month, reports it re-opened its outlet on Western Avenue in Allston today: Read more.

Police: Man failed to get gas at Allston station because it was closed, instead got arrested on gun charges 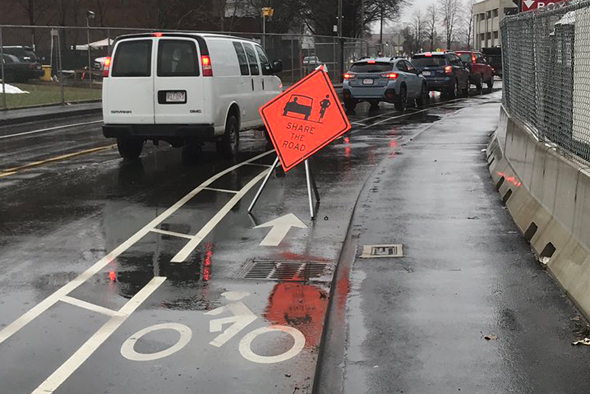 What better place to put a sign urging motorists to "share the road" with bicyclists than in the bicycle lane? Liam Sullivan spotted this sign on Western Avenue in Allston this morning.

Auto-body shop, parking lots could be replaced by biotech labs and offices along Western Avenue in Allston

Two developers are telling the BPDA they will shortly file detailed plans to create an biotech and life-sciences R&D park on either side of Western Avenue, at the edge of Harvard's vast Allston holdings, where the university is planning its own large R&D development. Read more.

The Breakfast Club, 270 Western Ave., passed a health re-inspection on Friday and a city health inspector cleared it to re-open.

On Aug. 31, a health inspector had found serious enough problems to order the diner shut.

The Bus Stop Pub on Western Avenue has its last last call on Saturday, as the development wave continues to crash over the neighborhood. The Lincoln Tavern down the other end of the Guest Street corridor in Brighton is slated to be replaced by condos.

A fire that broke out in a second-floor apartment at 1 Western Ave. shortly after 7:30 p.m. went to three alarms before it was knocked down by Boston firefighters. Read more.

Victim being lowered to the ground. Photo by BFD.

Allston park to get major redo

Mayor Walsh and Harvard President Drew Faust get their ceremonial shovels out today to officially launch a $6.5-million upgrade of Smith Field that will include a street-hockey rink, a splash pond, new walking paths, an amphitheater for public performances and upgrades to the existing playground and playing fields.

The ceremony starts at 4 p.m. at the park off Western Avenue.

Designboom gives us a tour of 273 Western Ave. in Allston, which a pair of Baltimore artists used as a canvas. The house in more boring days.

Earlier:
A different breed of house painters in Jamaica Plain.

A Japanese hot-pot place in Queens, NY, is expanding to Western Avenue in Brighton, taking over the space where the Maki Maki sushi buffet used to be. Read more.

The Boston Licensing Board voted yesterday to grant a beer-and-wine license to the Trader Joe's under construction on North Harvard Street at Western Avenue in Allston. Read more.

The Boston Licensing Board decides tomorrow whether to let a Jewish-style deli open in Barry's Corner, a locale not currently associated with pastrami or Dr. Brown's Cel-Ray. Read more.

Transit Police charge a man who'd parked in such a way to block an Allston bus stop just could not deal with the fact that forced a bus driver to block him in to let passengers off at the stop, so he went up to the driver's window and punched it hard enough to shatter it, showering the bus driver in glass shards, some of them possibly landing in his eye. Read more.