Old Ironsides goes out for a quick run around Boston Harbor 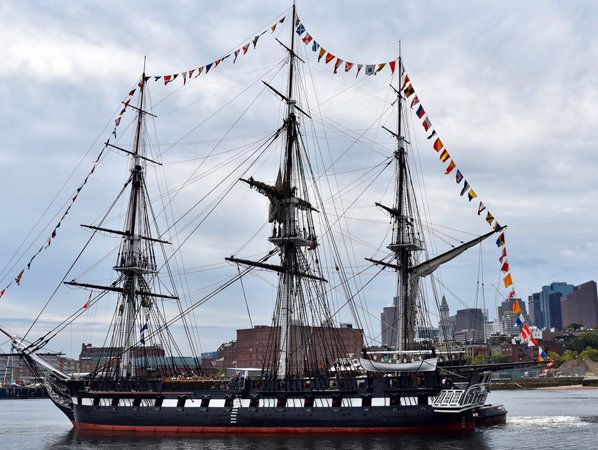 Gary Waldeck watched the USS Constitution out and about this morning.

This cruise is now the annual event whereby Chief Petty Officers from throughout the Navy are trained in the traditional skills and then given a chance to be War of 1812 sailors for a few hours.

Since this new Tradition was begun more than a decade ago -- its been very popular with the CPOs and the Navy. The Chiefs get special honor and the Navy has a crew to take the ship to sea --- on top of that the Tourists and Bostonians get to see the Constitution as a "living ship" reminiscent of the days of USS Constitution vs HMS Guiriere on August 19, 1812

For the Chiefs this is a true honor -- now approaching the 25th necessary to qualify as a Boston Tradition. For the Navy this provides the USS Constitution with a full-enough crew to make the trip out to the outer harbor able to done with sails unfurled.

For the tourists and Bostonians, both local and remote, of all ages -- this is how the almost always tied-up at the Pier in Charlestown museum ship --- becomes a living, breathing recreation of "Olde Ironsides" the victor vs HMS Guerriere

The first major naval encounter of the War of 1812 took place between the USS Constitution, commanded by Captain Isaac Hull, and the HMS British Guerriere, commanded by Captain Dacres. The two ships were both rated as frigates and carried similar armaments. The British captain was sure of victory, and before the encounter he was reported to have said- "There is a Yankee Frigate: in forty five minutes she is surely ours take her and I promise you four months pay."

As the two ships approached each other, the British kept up a steady fire of long-range cannon fire. The early shell bounced off the hull of the Constitution without causing any damage. It is said that a cry went up "hurrah- her sides are made of iron!"- Thus her name soon became "Old Ironside". When the two ships were 25 feet apart, Hull gave the order to open fire. The cannon hit the Geurrier with devastating effect. Within a short time all the masts of the Guerriere were down and Dacres had no choice but to surrender. While the victory of the Constitution militarily was a modest success, its political effect was substantial. It solidified support from New England for the war effort and countered the poor war news coming from the Canadian front.

Today British Consul General to New England Harriet Cross @harryvx and the @rafredarrows fired our gun as we commemorate the 207th anniversary of USS Constitution's battle with HMS Guerriere. Today there is no closer naval partnership than the one between our two countries!

2. CPO Selectees will work aboard "Old Ironsides" where they will be
immersed in more than 200 years of naval heritage while learning about the
art of sailing, construction of the ship, handling of 19th century guns, and
manning her gigs. The training will culminate in bringing USS CONSTITUTION
alive and commemorating the battle between her and HMS GUERRIERE.

4. Attendee costs for this OPNAV-authorized, mission essential training
event are to be authorized from attendee unit training funds. Unit
Commanding Officers shall determine whether CPO's/CPO Selectees assigned to
their unit should attend, taking into account the availability of unit
training funds.

5. Logistical information such as travel recommendations and uniform
requirements will be emailed to all participants once their attendance has
been confirmed.

What a true treasure we have in Boston.

...every now and then I get a little bit nervous
That the best of all the years have gone by...

Boston says shortage of lifeguards means it won't be opening four neighborhood pools this summer; fifth to stay closed as unsafe
National Park Service would tear down historic, but hulking and unused warehouse to create new USS Constitution Museum and visitor center
Feeding frenzy at the Charles River Dam
It's good to live in a city where you park for a client meeting and some living history goes by
Charlestown mainstay Jenny's to close at the end of the month
Police hunt several guys and a car for gunfire near Charlestown High yesterday