You've just won your party's primary, maybe you don't feel like putting on pants the next morning 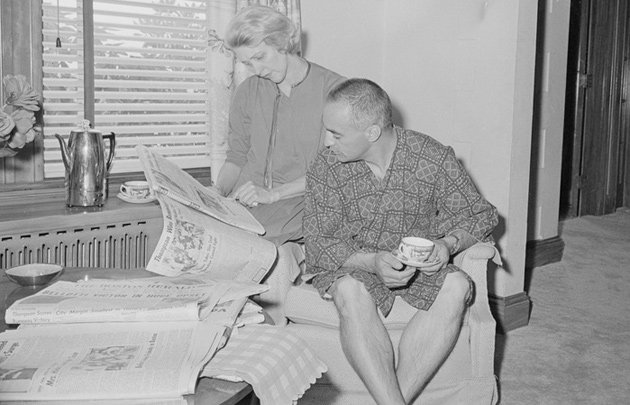 Back in the day, politicians who'd won elections would often invite the press in the next morning to watch them bask in the glow of being a winner.

On Sept. 11, 1964, Arthur Howard of the Boston Record-American captured Frank Bellotti sans pants in his Quincy home the morning after the lieutenant governor had defeated his boss, Gov. Endicott "Chub" Peabody, in the Democratic primary (Bellotti then went on to lose to Republican John Volpe, whom Peabody had beaten two years earlier).

On Sept. 26, 1963, after coming in first in the preliminary for mayor, incumbent John Collins had enough time to put on pants and even a tie before Gene Dixon, also of the Record-American, arrived to snap Mary Collins pouring him a victory cup of coffee: In 1967, the morning after Secretary of State Kevin White defeated School Committee member Louise Day Hicks in the race to replace Collins, he sat for interviews in his Beacon Hill home, then went out with wife Kathryn for a jaunt around the Public Garden: Morning photos from the BPL Brearley Collection. Posted under this Creative Commons license.

Wow. Women have a come a

Wow. Women have a come a long way since then. Or have we really?

Did any of the Kennedy's of that era...

Know how to keep a pair of pants zipped up?

I was the mailman for The

I was the mailman for The Whites before they passed. Both were very nice people. Mr White would always call me "Khed".

He had 12 kids, but he kept them on outside the house. An intelligent class act, who probably would have been elected governor if the Globe hadn't run the swarthy Italian "cartoon" before the primary.

I'd be curious to see this cartoon.

...because there's one thing Massachusetts is noted for is a lack of Italians.

And, ya, let's see the cartoon. I don't remember the race, too young, but please enlighten us as to the 'anti-Italian' bigotry you are alluding to.

You really think that there *wasn't* anti-Italian bigotry in New England in the mid-60s? Good grief man.

Belotti and his wife are still alive.

Volpe was Italian, too.

And his professional career involved owning and building a large construction firm.

Which, at the time, makes ethnic slurs against a lawyer seem ... odd.

...Volpe was much more plugged into the political establishment than Bellotti thanks to his active role in the state Republican Party. He had Also been appointed MA Commissioner of Public Works and then, by Eisenhower, the first administrator of the Federal Highway Administration and had served as Governor before Peabody defeated him by about 4,000 votes. JFK had endorsed Peabody, plus Ted was running for the Senate for the first time which fueled Democratic turn-out. Peabody’s two years were marked by missteps & controversies, so Bellotti was able to beat him in the primary despite JFK’s continued support.

Adam why are you giving the

Adam why are you giving the Globe a pass on the cartoon? Why aren't you holding them accountable for sins of the past?

There was a tenuous connection to someone name John Coady and Bellotti. Someone just happen to spray paint on the northbound of the expressway right on the Hubbardston Street abutment after the DYC at eye level for everyone stuck in traffic "Who Killed John Coady"?

There was no effort to remove this graffiti for years even though other graffiti was always removed by the then Mass Highway.

Last-minute deal averts state takeover of Boston schools
National Weather Service explains why our weather records come from Logan, where the weather isn't the same as in much of the rest of Boston
State says it's not waiting for new Boston school superintendent; to declare Boston 'underperforming'
An artists' collective once bought a Fort Point building for its members to live and work in; could it happen again?
Back in the day, even street urchins wore ties - and scally caps
BPS to stay local with superintendent this time; the two finalists both live in Boston