Once, all Bostonians could tell you how many cookies Andrew ate 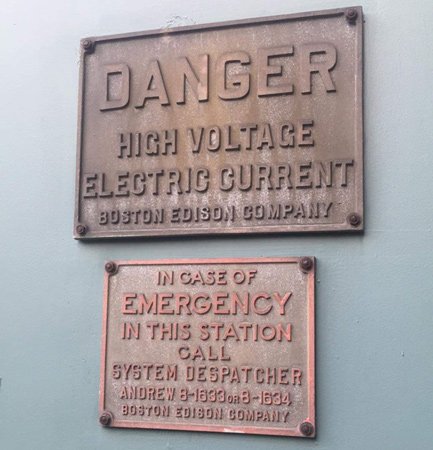 Roving UHub photographer Greta Gaffin (yes, the former UHub copy desk) spotted these signs today in the back of the BU College of Arts and Sciences. Boston Edison and "despatcher" alone are enough to date them, but also notice one of the phone numbers: Andrew 8-1633.

It's from the days when local phone numbers all started with two letters - which stood for a longer name, back when phones had rotary dials and each number (save 0 and 1) had three letters associated with them. Today, you'd just dial 268-1633 (well, and you'd have to add the area code, too).

Back in the day, the Andrew exchange, which covered South Boston, was particularly known for radio ads by Adams and Swett, a carpet-cleaning company that got an Andrew 8 number when it moved from Kemble Street in Roxbury to 380 Dorchester Ave. in 1957.

Boston Edison, of course, gave way to NStar and then Eversource.

Neighborhoods:
South Boston
Topics:
History
Ad:
Like the job UHub is doing? Consider a contribution. Thanks!

Is this commercial online anywhere?

Surprisingly no it is not.

Surprisingly no it is not. This was a radio jingle though so it wouldn't have any video to post. I'm an Old Time Radio fan and I've never run across it while listening to old shows.

There were TV commercials also

And while the jingle played they included a few seconds of a cartoon image of a kid eating cookies from a cookie jar.

"The Meat Falls Off the Bone"

"A Whale of a Good Time"

"You'll love it at levitz"

All the other exchanges that I recall had that 1st digit correspond to the number for the 3rd letter of the exchange name: CApital 7, DEcatur 3, BIgelow 4, and especially KLondike 5-. (The latter, of course, being the exchange in every movie or TV show, because no exchanges used 5/JKL.)

So why the special exemption for Andrew?

That's how they started

South Boston was an exception...

The announced (publicized) reason at the time was for expansion. As noted by someone else, if you only used two letters to form a word, the third character of the exchange could be any digit from 2 through 9. (Eventually they also used 0 and 1.) That allowed Cambridge, for example, to have both UNiversity 4 and UNiversity 8.

Another, less publicized reason for making that 1940s change was probably to standardize phone numbers on a nationwide basis, to allow for direct distance dialing -- still in the future at the time, but they were starting to plan for it.

Later, in the '50s/early '60s, Arlington changed from ARlington to MIssion; East Boston from EAst Boston to LOgan, Hyde Park from HYde Park to EMpire, and others.

By the time I arrived in Boston as a college freshman in 1968, there were already some all-digit numbers such as 491- in Cambridge; but the phone directory still printed the letters for the older exchanges.

So the Cambridge 49- exchanges never had a word?

Please Don't Be Frightened By The Graphics

Someone 27 years ago codified the exchanges.

Salem was the PIoneer

The original two phone exchanges in Salem, are 744 and 745. More have been added since then.

My grandfather's old rotary phone had a label that had PIoneer 4-xxxx printed on it (xxxx = last four digits of phone number).

Salem has PIoneer, likely from Alexander Graham Bell having made the first public telephone call from the Lyceum Hall on Church Street. The plaque commemorating this event is still on the building today.

The City that Always Sleeps: Seaport could get Japanese/Vietnamese noodle bar, but neighborhood group opposes 12:30 a.m. closing time
South Boston could get a North End style cafe, and what's that without liqueurs?
Boston 311 once again forced to remind submitters to remain civil
Teens charged with beating man into unconsciousness at Andrew T station
In South Boston, somebody's thinking goose for Thanksgiving dinner
Soon, you could quaff a beer after a hard-fought pickleball or shuffleboard match in South Boston